There are three weeks left to see this year's Summer Show at the Royal Academy. But don't panic... it's not worth the effort.
Last year's show (2012) was disappointing enough and my friend and I agreed that it was so bad that we should enter something ourselves seeing as the standard was so low. The walls were festooned with splodges and half-baked ideas that at aged eight I would have been embarrassed to show my junior school teacher. Many of these, because they were created by established artists with RA after their name had huge price tags, in the tens of thousands.
But the year passed and we forgot to create or submit anything.
Had we done so and not been selected for this year's show we would have been even more appalled because this year has to be the worse Summer Show I have ever been to.
There's even more of the same over-sized over-priced seen-it-before churnings from RA members, pus way too much of what looks like art-as-therapy.
Add to that, some rooms don't look like they have been curated at all as the random hanging/grouping is a mess with a few competent pieces hidden in amongst all the rubbish.
I was distracted by the patterns my beaded bag was making on my arm. I looked like a plucked bird. So I took some pics and got told off for using my camera in there. (I wasn't even allowed to take pictures of the lovely metal floor grilles, which were also far more interesting that the wall art.)
Here is a montage of my beady body art pics. I might enter it for selection next year; it will be titled "RA – Rather Absorbing / Real Art": 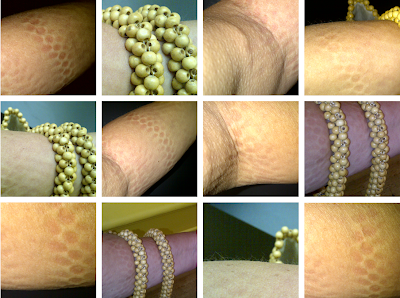 It was cold in there due to the aircon. In these pics you can see the hairs standing up on my gooseflesh skin.
There are couple of good things on show there including Grayson Perry's lovely tapestries, a homage to Hogarth's "The Rake's Progress"  but I advise you to save your pennies... instead, go and take a look at the 'conveyer belt' art for sale further along Piccadilly on the railings of Green Park.