I am tidying up my photos. It's a long slog.
I just found this one from when I was wandering through the Chalk Farm area last month doing a recce for one of my guided walks.
Tropical eh? 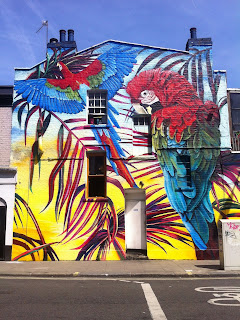 Have you seen what's been going on at Highbury Corner recently?
It's turned into Islington's version of Diggerworld expect that the machines don't seem to have moved much since they demolished a strip of grass and trees approx 5 metres wide from around the north and western sides. And I can't see where the ticket booth is.
As far as I am aware reconstruction work only started this week – so the sign I saw at the top of Canonbury Road last Monday (right)
Two days later I took these pics from the upper deck of bus:

Turns out it's all in the name of progress and here is the explanation.
The really good thing is that the lovely foresty area at the centre of what Islington Council had labelled "Highbury Island" will now be accessible as a park – I've been wanting to get in there for decades. As you can see it's really lush and shady.
The loss of the flora is to put in cycle lanes and to change the flow of this junction. It won't be a roundabout any longer – it'll return to how it was before the Germans made a mess in 1944.
When the work is completed I really hope cyclists will use their designated lanes because if the tumbleweed tracks along Drayton Park and around Navigator Square at Archway are anything to go by I very much doubt the green tarmac will see much action.
And... buses and bus stops... where are they going?
The concourse outside Highbury and Islington station has been in a state of flux for ages now.
Last month I thought they'd finished, though it looked really dull, but then two weeks ago they started digging up a newly-paved area near the kerb and I thought, aha, they've forgotten to put a bus stop there!
But nope. There is still only a tiny bay that I reckon you could squeeze two cars into. What's that for? Four buses use that route. I think a big opportunity has been missed here.

Sun Street and The Flying Horse

Demolition and reconstruction. Will it never end?
And this I saw it coming for years....
Sun Street runs behind the Broadgate complex just north of near Liverpool Street. Since early 2009 I have been keeping an eye on this terrace.
A couple of weeks ago I took a detour and was sad, but not surprised, to find that the whole Georgian terrace has been demolished but the The Flying Horse, a Victorian era public house, remains in business on the corner which, I assume, will soon be given scrub-up and a homogenised makeover as per the Three Crowns just north of Old Street Roundabout which, too, has been saved like a little historic jewel embedded into a modern glass bock.
Could someone please explain to me the logic and rationale here?
I am not suggesting we keep everything but jeez, this area is fast becoming as glassy as the Isle of Dogs or Nine Elms. I think, this leaves only Worship Street and Leonard Street with any pre-1880 buildings.

Gardners in Spitalfields on a sunny Saturday

This shop, just along from Spitalfields Market, always brings a smile to my face. And especially so on such a gloriously sunny day. It's a joy to know this family business is still trading after all these years – 148 years to be precise.
But where to place the apostrophe in the name? Is there one at all?
In the pic you can see they've placed it before the S as in the shop or business of Mr Gardner.
But having just checked their website I am now confused – on the home page it's visible as Gardners (plural, no possession) and, within the central graphic on there, it's depicted as Gardners' (plural possessive).