Whilst we're in a form of lock down I thought I'd put together a relevant collection of images I've taken over the past few years.
You might be able to recognise some of them.
Stay safe. 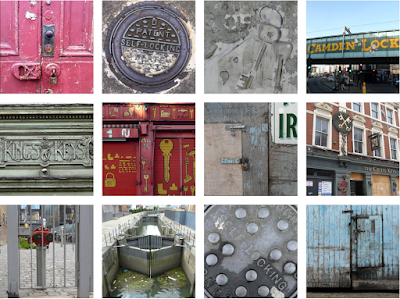 Approx 95% of business doorways look very similar these days to the pics above shown at top left, bottom right and third one in on the second row, with shutters down and padlocks in place. Some establishments, such as pubs are even boarded up to obsure the view inside.
It's a stange world we are living in at the moment. Like we are in a bad movie such as 28 Days Later or Day of The Triffids.
No comments:

The Changing Face of London – coming soon in 2000

One of the things I have been busying myself with during this period of lock-down and enforced islolation is a concerted effort to sort out, tidy up and/or get rid of a lot of the stuff I have managed to amass over the years.
So far I have rediscovered old diaries from my schooldays (hilarious reading!), alphabeticalised my music CDs, sorted my books into themes, watched a lot of the old films I'd recorded off the TV and forced myself to dismantle, crush and recycle lots of old cardboard boxes that up until now I just couldn't part with because "ooh, such a nice well-made box, that'll be useful one day". These I had saved like huge cuboid faceless Russian dolls.
During this declutter I found a large envelope full of cuttings from magazines and newspapers that hadn't as yet made it into my 'things that interest me' display books. I haven't updated that project for over a decade. I am very good at starting one thing and then getting distracted by another. Hence the many half-finished jumpers, jewellery, needlepoint, paintings and ideas for clay pipe fragments.
Oops – I've gone off on a tangent again...!
So, to the point...
I found this column torn from Time Out magazine, Feb 1994 – a list of the building projects expected in central London by 2000:
Interesting huh?!

When this virus is under control and we are given the 'all clear' it will also apply to the inside of my home. I can't be the only one having a major Spring clean – the charity shops will be inundated when they re-open and crying out for extra volunteers. Meanwhile, I am free-cycling – my neighbours have been snapping up the books and unwanted items that I have been leaving on the garden wall.
Stay safe and healthy.

Wandering from Highbury Fields to Crouch Hill last month I thought I'd take a couple of detours to check on the elephants.
In August last year, there was a piece in the Gazette about these elephants providing a hiding place for druggies. The following week it was reported that the hedge had been damaged – one elephant had lost its head in a car accident. Hmmm. Seems a bit odd to me how a driver managed to lose control in a backstreet within a borough that already had a 20mph speed limit.
It's worth noting that just up the road at the next junction there is another excellent example of hedgemanship where a swathe of dense foliage offers far better cover for illicit proceedings. A long row of castelltions curves around the corner:
I continued my stroll past Finsbury Park station, up Stroud Green Road then right at The Dairy where the old Hovis ghostsign is now mostly scrubbed away due to graffiti removal, past the flippin' flipped letters on the gates into Mount Pleasant Crescent... and... damn, a van was in the way, but the elephant is intact.
See the street here.
And re the ther things mentioned above:

Holloway memories – shopping in the 1990s

In January 1988 I moved from Romford/HaroldWood into a flat in Marlborough Rd, N19, keen to be living in area that ticked all my boxes – easy transport connections for work and socialising, lots of local shops and within a £5 cab ride home from Central London (really!).
Sometimes I'd do my food shopping up at Archway as I exited the tube but mostly I'd take the bus to  the Nags Head area as the options were better. I have always said "if you can't find it in Holloway, then you don't need it". So often have I trawled the West End shops only to find a better, cheaper product just around the corner in N7. This same idea popped into my head recently and it got me thinking about all the shops I used to use in the 1990s that are now gone.

Gibbers greengrocer – next door to The Eaglet pub at 116-120 Seven Sisters Rd (at the time of writing = a Post Office and Mr Panini's** cafe).
Gibbers was a proper old-style fruit and veg greengrocers with boxes of produce all over the show. You queued to be served with a pound of this, two pounds of that, eight of those and six of them. It was a delight. Wholesale deliveries large and small coming and going constantly. John the manager was such a lovely man. I recall one Saturday when he asked where I'd been recently and I told him I had hurt my back and then as one of the others was serving me John nipped into the chemist next door and bought me some pain relief tablets that he said had worked for him. How nice.
Gibbers suffered tremendously when the parking restrictions came into force meaning companies couldn't even park outside their own premises. I had many chats with John about this as it was really affecting trade. What happened to John? I am not sure he was a Holloway local. Tho I did find this written by someone who used to work there.
The Gibbers site became an EDA food centre – see here

Green's home furnishings – a few doors up from Gibbers covering three, possibly four shops. Green's walk-through windows contained blinds, curtains, cushions and all sorts for the home. I bought lots of bits from there in the late '80s and early '90s when I was setting up home.

Shelley's shoes – 89 Seven Sisters Rd, opposite Gibbers.
I loved Shelly's shoes. The company had been going since the 1940s and was the go-to shop for big fashion trends such as crepe soles, winkle-pickers, Chelsea boots, platforms and DMs. They always had a really good alternative selection and really well-made. They had a few shops across London including Carnaby Street, Deptford, Chelsea and Kilburn High Rd with larger stores at Oxford Circus and Neal Street.
As regards the Holloway shop, I remember being so pleased that I had a local branch. I recall the marvellous Victorian walk-in windows full of their fabulous footwear. But I now cannot place when the shop closed. Today, all the shops along that stretch are flat-fronted UPVC blandness and I am now annoyed with myself that I never thought back then to take a photo. Tho I wasn't running around snapping the details on our streets until well into 2006.
A bit of sleuthing shows me that Shelly's 'died' in 2003. I can find no ref of the Holloway shop online. But I do have a couple of Shelley's carrier bags. The bag shown here shows the shop's address with an 071 telephone code. I also have another duffle-bag one with 0171/0181 codes on it but the Holloway shop is not listed. Hence this branch must've closed pre-1999.

Safeway's – opposite Gibber's and Green's at the eastern corner of what was once a huge Victorian store created by Fred Crisp* who had become so successful that he had manged to purchase not only all the shops in that terrace but also houses in Devonshire Rd (now Axminster Rd) and Sussex Rd (now Sussex Way). This later became The North London Drapery Store and then B.B.Evans before being split again into the various units we see today.
I have memories of carrying heavy bags shopping from Safeway up to Marlborough Rd past the house I live in today. Argos was also in this stretch before they moved to the site on Holloway Rd which back in 1988 was Sainsbury's (or was it KwikSave by then?).

Holloway Arcade – junction of Holloway Road and Parkhurst Avenue on the site of the old Parkhurst Theatre. Today it's CarpetRight. This had seen better days by the time I got here. Most of the units within were already boarded up and only a few businesses remained. One, I think was a shoe mender or similar(?).

Manolis' Cafe, Hercules Street – the best breakfasts in Holloway, if not North London.
The absolute best bubble and squeak ever. It was my go-to cafe. I'd take all my visiting friends there. I always enjoyed listening in on Manolis and his Greek friends as they philosophised and assessed world politics.
By September 2006 the cafe had closed. A typed letter was attached to the boarded up windows. It was so sad. He'd been feeding me for 15 years.
I hope he kept the huge marvellous potted money trees that used to be in the windows. For a short time Manolis worked at a cafe near Finsbury Park station but soon after due to ill health he retired to this home in Southgate. I bumped into him a few times. We kept in touch for a while. I went to have dinner with him and his wife at a restaurant in Southgate one evening in 2008. I should have kept in touch.

Next, Clarks, Ravel – all in the stretch of Holloway between Nags Head pub and M&S (now also closed down, and relocated to new premises behind Archway station). Woolworths were also here in Holloway (an L-shape shop at the site of Iceland with another entrance opposite the Halifax) but I am not sure I recall the shop personally. They had other branches at Angel and Archway so possibly this one had already closed by 1988...?

Selby's – in 1988 it was dreadful and really out of date. Certainly not keeping up with the times. Or even attempting to rival nearby Jones Bros. I remember wondering how they were even managing to stay open. It was a complete mish-mash and looked to be on the brink of closure. But when Jones Bros closed two years later Selby's pulled up their socks and now I think the store rivals John Lewis.

I think that'll do for now... I'll save the rest for another day

*I am compiling a history of Mr Crisp and his store – all additional info welcome.
**A sign within the window reads "Panini's" - ah but Panini is already plural. The inclusion of an apostrophe intimates that either a letter is missing or ownership – the place must therefore be owned by someone called Panini, tho I have yet to meet him. (Paninis with an s added would make it doubly plural and that would be daft)
30 comments: