The latest bits of Kit in Hornsey Road

You may recall that last December I wrote about Kit's amazing foam sculptures in Hornsey Road.
Some of them got broken and some got stolen but most have been replaced with new models as shown below.

Update
Below are pics of Prisoner 24601 and what happened when someone tried to help him 'escape'.
The bottom row are the latest editions* – as you can see there is a lot of thought and hard work going into theses lifelike foam fellas.

Some Ilford history and reminiscences

I used to visit Ilford in the 1980s mainly for the shops, as a change from the ones in Romford. At that time traffic was already being diverted away from the High Street round to the back of the town hall in an attempt to pedestrianise the shopping area. I recall discussing this at the time and fretting for Ilford that a ring road would affect the High Street in the same way as had happened in Romford making the town centre a desolate, almost scary, no-go area in the evenings.
Last Monday, 20th March, I happened to be in the Barkingside area so after a wander around Gants Hill roundabout, like you do, I walked through Valentines Park and continued south to Ilford town centre to check out what it looks like now.

Exting the park it was nice to see the lovely old terraces above the shops in  Cranbrook Road with many Edwardian and Art Deco façades hinting at its busy retail history.

Moving closer to the station I found that Lloyds Bank are no longer within their understated Art Deco masterpiece. I recall the cashpoint there was one of the first I ever used when £50 was the maximum withdrawal. And the bank on the opposite corner with its lovely clock (Midland?) that was for a time a Santander branch, is also empty at the moment. But the old Dunn&Co men's outfitters shop (now Zee&Co) still retains some of its original windows which is great because I have noticed that these have been completely stripped out at their other sites. Dunn's windows were the most colourful thing about the whole company – everything they sold was beige!

With trepidation I moved closer to the station, daring myself to hope that Bodgers was still there and assuming it to be long gone.
Whoo hoo! It's still in business – 127 years and still going. Though the inside resembles a mad closing down sale at the moment (it isn't; I asked). Some of the original ArtDeco steps and metal bannisters are still in place at the main entrance. I had hoped that the wide curving stairs at the centre were still intact as well. But the internal parts of the store appear to have been totally renovated and an escalator now sits where the old stairs used to be. These were the stairs on which my mum saw a teddy bear and asked for him to be taken out of the display for my 2nd birthday present. I still have him; he's a Merrythought with bells in his ears and a cute, quirky expression.

Further along the High Street I found that Harrison Gibson's old furniture and furnishings store is surrounded by scaffolding with demolition signs on it.
Signage for the store is still visible along with 'Penthouse' a nightclub that used to be at the top. In the 1980s my friends and I twice went to 'The Room At The Top' an earlier disco up there. It wasn't our kind of place really. The biggest thrill was getting the lift up to the top.
My father served his upholstery apprentice at HGs and then worked there for a time before starting up a business of his own in nearby Goodmayes in the early 70s. I think I recall my mum worked in the admin department at HGs for a while. And when I bought my first property, it was from HGs I bought my first carpet. I had forgotten all of this until now.
Just west of the Town Hall is a lovely Art Deco building which was the original Woolworth's shop with faience tiles curved verticals. Strangely, it's now occupied  by the Burton Group, yet Burton's original building at the far end of the High Street houses a gaming centre at ground level, and Woolworth's last site in Ilford was where Wilko is now, opposite the station. How confusing!


Speedy update: I recall the old covered market arcade was under threat of was demolition in the 1980s – there is now a tall glass building on the site. Most of the High Street is indeed pedestrianised with a small modern precinct added (I didn't enter; not my kind of space, man). And, I very much doubt even Ilford residents are aware that Chapel Road at the centre of the one-way system is so called because it circles the only medieval building in Redbridge; the old hospital chapel.
11 comments:

I see dead things – Not for the squeamish !!!

Crossing Dickenson Road on Crouch Hill last week I noticed two dead frogs/toads about a metre apart in the road. I took some photos (like you do when you are an amateur animal forensics nutter) and then stood there contemplating how they'd met their sorry end.
It all looked pretty fresh. Had they been crossing the road en-masse and these two got unlucky? If so, where were they all headed to? This is the top of a hill. Hmmmm. I decided no, not that, because they didn't appear to be squished enough (no complaints please, I did warn this was not for the squeamish at the start!).
Perhaps they were dropped from above? But both of them? At the same time? From the same source?
And then I recalled that on Saturday 4th March I was standing with a friend in the road behind Sadler's Wells Theatre and we heard something hit the pavement next to us and turned to see a blackbird just lying there shaking. This continued whilst we faffed about wondering if we should do something and after two minutes the bird was motionless. We looked up and couldn't see where it could have fallen from. Did it die of exhaustion? Or did a larger predatory bird drop it? We intended to return to the scene later but, er, that didn't happen.

Last May I happened upon two dead chicks on a path in Highgate. There were thin trees above, but no nests in them and these birds as you can see hadn't finished sprouting feathers yet. So I deduced a predator had stolen them then dropped them. I don't know what species these birds are, perhaps someone can tell me.

About ten metres from this macabre scene someone had put a soft toy animal on a fence. I assume his owner had dropped him and someone had been picked him up in the hope that he might be rescued. No such hope for the baby birds.

Last week I was chatting to Jason at the Oxfam Books & Music shop at Crouch End as I assessed my card stock there. As I added some more of the Old Dairy at Stroud Green he asked if had noticed that one person depicted on the sgraffito panels had something extra.
Intrigued, I walked back down the hill to take another look.
I have studied these panels many times but although I had noticed that the people aren't what you'd call beautiful and are mostly out of proportion with the other characters and objects around them, I hadn't spotted that one of the butter-making girls has an extra finger. 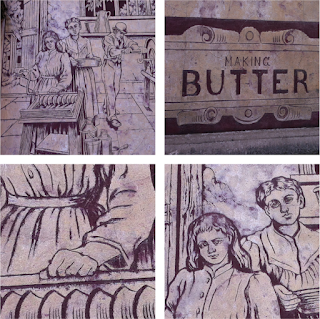 Artizans and Labourers in Queen's Park

I have written before about The Artizans and Labourers General Dwellings Company and their establishments at Harrow Road and Noel Park.
This post shows some of their earlier buildings – little terraced cottages along Kilburn Lane in Queen's Park, London W10, built in 1876. 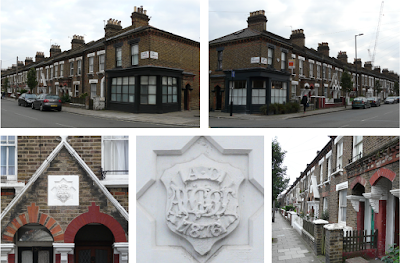 Note how the end of each terrace had a corner shop. Directly opposite these shops is a collection of buildings that looks like there was either a school or a dairy there. I don't know if these were also part of ALGDC. This needs further investigation – I will add it to the list/pile.
If you know anything about any of these buildings, including the ones over the road, please do let me know.
Thanks in advance.