Foxed by the foxes

From the Holloway Road to my house is approx a 3 minute walk. I was coming home at 11.30pm the other night and counted six foxes; two trotting together, 3 others as loners seemingly out on foraging or fighting missions, and another one just sat there in the middle of the road looking at me. Six is a lot in that short timeframe, even for my area.
I once read that in the wild foxes tend to be just one to each half mile square territory. But the urban foxes here in London have had to adapt. These beautiful scavengers just watch us until we get too close and they skulk off to take cover in a front garden or under a car. Often, after dark, I hear them playing or fighting in my back garden or screeching in the street. 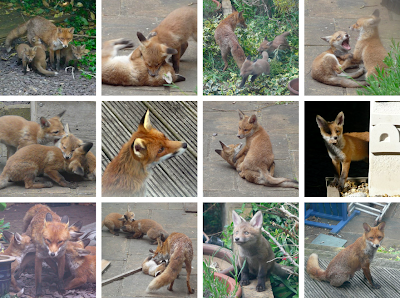 Two years ago a vixen raised her cubs under the decking at the end of my back garden and until the little cubs had the strength to jump the garden wall they chased each other around my garden like it was a racetrack, flattening all the low-growing plants the process. I didn't mind too much. It was like I had my own private Naturewatch – they were so much fun to watch. The vixen often stood there staring directly at me looking jaded and tired, almost sighing as the cubs suckled, though they always calmed down immediately when she started grooming them.
There are decimated zones out there again this year where the foxes have selected areas as comfy beds or dining areas. I am forever clearing up their discarded chicken bones and ripped plastic bags. My once lush and colourful crocosmia is now a flattened mat of dead grass. Ah well. I often find one asleep on the roof of my garden shed roof when I get up in the morning. he/she just looks at me and dozes off again.
But here's odd... earlier this week my friend found something very strange involving dead foxes near his home in Notting Hill.
We are perplexed. Can anyone explain this?