Would you believe it? Wood block surfaces still visible on London streets

A few months back I was involved in an email exchange about the patch of wood blocks adjacent to Bunhill Row Cemetery, just off Artillery Row, specifically, and perhaps coincidentally (ironically?), in Chequer Street. Back in ye olde Victorian times this street ran alongside Star Works, the De La Rue postage stamp manufactory, though I don't know if this company was related to Danny. 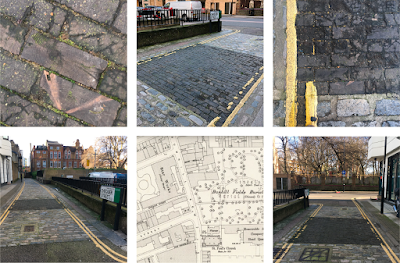 This little road is a patchwork of setts and cobbles and looks to have been repaired, extended or updated with various kinds of blocks – in addition to this patch of wood, there are also granite setts and vitreous setts, the latter being a by-product of the gas industry and said to be identifiable by their bluish glaze. Note also a couple of interesting man hole cover plates.

Ah, but this isn't the only patch of wood paving in the metropolis – I have happened upon quite a few other places that show hints of this eco-friendly-but-hard-to-maintain wooden surface. I've found enough to start a specific collection on my desktop and here I am sharing some of them with you...

At 90-92 Pentonville Road N1, on the corner of Penton Street, there is evidence of a whole paved private courtyard that is currently used for car parking. Patches of wood can be seen peeking out from under the receding Tarmac.

Research shows that this was once the display forecourt outside the ground floor showroom of R. W. Wilkins & Son, marble, granite and stone merchants, monumental masons, sculptors, table-top manufacturers, shopfitters, and interior decorators in marble and tiles. This had originally been constructed as three Georgian houses with deep front gardens, mirroring those across the road, and was converted into one premises in the 1860s by Henry Webb Wilkins, probably RWW's father. The rectangular blocks appear to be the same shape and size as the ones at Chequer Street.

Many good remnants of wood block can also be found nestling within the segments of some old manhole covers. Just east of here, near the border of Islington and Hackney (when this was Finsbury and Shoreditch, respectively) there are examples in Mora Street on the southern side of City Road:

And in Shepherdess Walk on the northern side – my pics were taken on a rainy day but, believe me, there's wood under them there puddles: 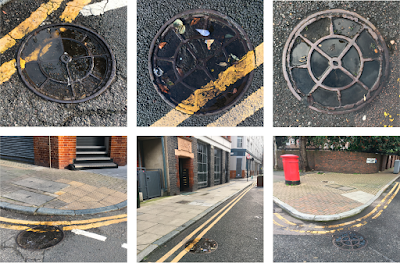 There's another example not far from there in New North Road, at the end of Wharf Road, and on Clerkenwell Rd at the end of Leather Lane (centre pic below). Plus a couple in West Square, Lambeth, a well-to-do 1790s development of private houses, one of which, here:

In the middle of Grays Inn Road at the junction of Acton Street, there is a superb example, as shown below on the left with the streetscaape below it, and two good ones on Islington High Street – one set within the pavement near Pizza Express, as shown, and another in the road at the rear of the former electricity transformer station and tram depot. A third one, by the southern door to that building, at the corner of Duncan Street, sort of facing The York pub, has been recently covered in Tarmac. 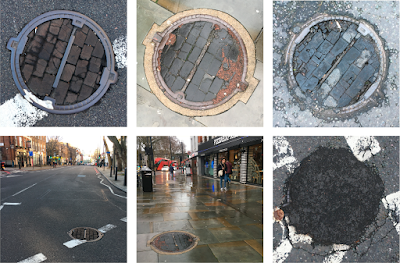 I'd really love to experience the sound of horses walking on a wood-blocked street. The super-informative Roads Were Not Built For Cars shows us that Bartholomew the cartographer, produced road surface maps of London where streets coloured yellow denoted wood, green indicated sheet asphalt, blue was setts, and pink for macadam (a pre-cursor to Tarmac). The rationale that wood blocks offered the benefit of a quieter environment explains their implementation in residental streets such as West Square and in the old hospital zone around City Road.

The same 'quiet' effect would also apply at this next location – the rear of City Hall, on Belvedere Road, built as the London County Council's head offices in 1911 and, hence, a really busy municipal street. 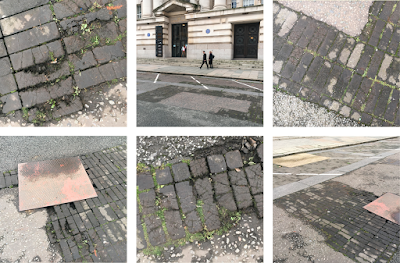 Here, long wooden oblongs, arranged in a grid format, have been uncovered for many years. Whenever I am in the Waterloo area I often go to check they are still visible. The random piece of flat metal is, I suppose, an attempt at protection.

I'm pretty sure I have located more patches across London, but I can't find the pics right now – do let me know if you've found any others yourself. 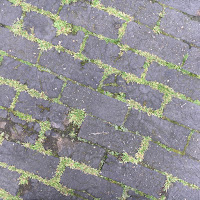 Update July 2021:  due to the recent wet weather, the woodblocks in Artillery row are framed in grass. I think it’s lovely
2 comments:

Oh my god... how many time have I walked past this and never noticed it until last month?

I am always banging on about how things are hiding in plain view, to look up, look down and around you,  yet here's me not noticing a stink pipe across the road from Essex Road Post Office.

I happened to notice it when I had to side-step a woman who was texting and walking but not looking where she was going (grr!) and I was immediately confronted by the maker's name on the metalwork. I then looked down at the wide base and thought, ooh that looks very stinkpipey, and so I stepped back to take a better look. Yep!

Much of Ham Baker's Victorian metal street furniture, in the form of lamp posts and stink pipes, still lines our modern streets. Indeed the company is still trading.

Considering the amount of stink pipe pics I have taken over the years I am surprised I have posted more about them. Here's a post from back in 2010 which shows some with attractive crowns.

Staying in Islington, earlier this year, I also [finally] noticed another stink pipe at the Holloway end of Liverpool Road on the triangle in front of the Baptist church – estimated previous walk-pasts = 384(!). And, near that, there's also another one on Holloway Road at the end of Eden Grove (which I had spotted ten years ago).  Closer to my home, there's one up near the railway line in Sussex Way, N19, at the corner of Hatchard Rd, and another on St John's Way, N19. I'm sure I will think of more once I hit the 'publish' button here, but hey, that'll do for now.

This Essex Rd pipe will now form part of my "The Only Way Is Essex Road" guided tour. Tho, it can't be the only one in the vicinity. 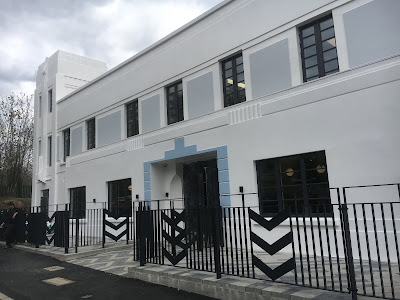 I'm so pleased to see how the renovation of this marvellous link to the world of movie making has evolved.

This is the former home of Kay Film Printing – a film processing company based here in Oxford Rd, N4, adjacent to Parkland Walk and Finsbury Park.

Its now almost finished and it looks marvellous. I really love those 'Jazz Age' style railings.

It's gone from a sad-looking building to a marvellous example of 1930's splendour.

Happy days. I am not sure how to include this on my Art Deco tour of the area but it's sure to be included on one of my walks.

Saloons – Everyone's gone to the pub or the hairdresser

Here in the UK, some restrictions as regards social distancing have been lifted – pubs with outdoor table space are open again and hairdressers are busy attacking our lockdown barnets*

It occured to me that both are historically linked by the word 'saloon' so I've pulled some pics together in my old montage-stylee showing a selection of lovely signage across London. 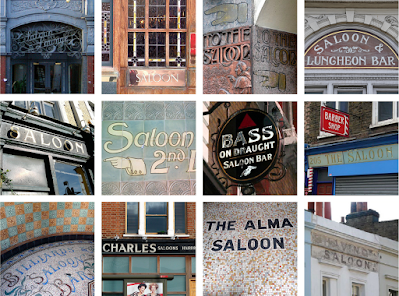 Most of these are pub signs but, as you can see, some are on hairdressers and barbers. Perhaps you recognise some of them or know of some other beauties...?

The separate rooms for saloon, lounge, public, private, snug and offsales is a thing of the past these days, harking back to a Victorian era of class and gender segregation. However, a few pubs in London still have the original walls/dividers and others have reinstated them. This latter section includes The Princess Louise in Holborn, the Fitzroy Tavern in Charlotte Street and the Angel at Rotherhithe.

Never mind sitting outside a pub; that's just not for me. I am looking forward to getting back inside; to stand at a bar or sit on a barstool; to read a newspaper in a comfy chair by a real fire; to talk to barstaff and locals... sigh.

I have been otherwise occupied

Oh my good... look at the date on my last post – the middle of January!!  And now we are fast heading for the middle of April. Whoosh! How did that happen?!

Although I have been almost constantly collecting ideas for this site, I have been filing them away in a 'To Do' folder and can now see that I haven't actually been sharing them with you. I will make a big effort next week as there are a few good things I have noticed or been alerted to these last few months.

The thing that has kept me so busy lately has been designing, researching and hosting virtual tours (online presentations via Zoom) in lieu of leading actual guided tours on the streets being as that's still not really possible yet due to the pandemic restrictions.

Presentations need good pics and reference, so I've been out and about in London's empty streets, wandering about in beautiful winter sunshine, snapping away with my camera to make the slides that accompany my talks.

I am really pleased how the presentations are going – lots of people come back to me time and again, and from all over the world – how lovely. And I will continue to do these going forward.

Find out more about my tours and talks at www.janeslondonwalks.com or simply click here for the upcoming schedule which gives more info about each one.