The Vanity of Small Differences

You might have seen the three programmes that Grayson Perry made for Channel 4 last month, called All in the Best Possible Taste, where he gathered inspiration for six new tapestries he was making that were to be based on his observations of the British class system.
The results are on show at the Victoria Miro gallery until 11th August.
I must admit that I wasn't going to bother going to see this exhibition, despite being a big fan of the man. I was expecting it to be 'just another set of tapestries'. He is almost TOO prolific and too full of wonderfully open-minded ideas. I am always protesting that there aren't enough hours in the day, days in the week, etc, yet here's Grayson again squeezing so much in (out?).
But I am so glad I made the effort to see the show.
The tapestries echo Hogarth's A Rake's Progress where Tom Rakewell squanders his inherited fortune and then ends up dying in a madhouse.
Grayson's shows us a modern day version of the story – Tim Rakewell's journey starts with his working class beginnings, moves into a middle class marriage, he buys a big house in the country and ends up dying in a retail park.
The tapestries are jam-packed with references and repeated images, and just as in Hogarth's set, there is a small dog in every one. You find yourself walking back and forth comparing elements within them. Grayson's drawings are, as ever, spot on, as are the quotes and written observations within each piece.
You can see all the tapestries in the above link, but what you can't see is the fantastic detail – these really need to be see at actual size – as I was really impressed at the quality achieved by the mechanical tapestry process as, in many places, there are really intricate and beautiful sections; wildly patterned wallpapers, dress materials, picture frames and iPhone screens.
The show also includes a few of his lovely pots. I suppose he probably felt he couldn't put on a show without featuring Alan Measles somewhere in the room!
I have only one complaint about the exhibition and it's about information/reference material... it would have been better had they put small images next to each tapestry, or on the printed information sheet, to illustrate GP's inspiration for each piece. For instance, the paintings he has referenced here include Masaccio's Expulsion from the Garden of Eden and Grünewald's Isenheim Altarpiece – I had to look these up online when I got home, which was a shame as it would have been nice to compare and contrast them when I was at the gallery. Ooh... as I wrote that I had a better idea... an interactive screen showing these religious works would have tied in beautifully with how Tim Rakewell's made his fortune.
Go see it... it's good. And take an iPad or something googly woogly with you so that you can reference those paintings.

My images for this post are in three rows echoing the class system: 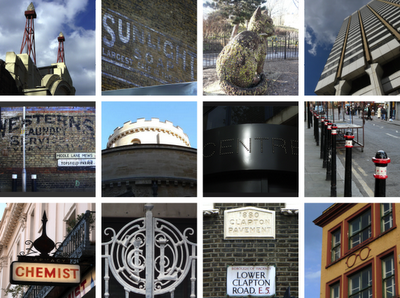