A portal to Iceland through a record shop in Soho – 28–30th October – FREE!

For three days only, experience Iceland in Soho.

Icelandair have created a below ground experience, bringing you the land of ice and fire, accessed via a door at the rear of Phonica Records, 51 Poland Street, W1F 7LZ. 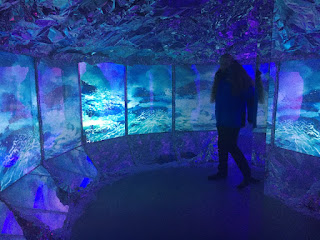 It’s a bit CS Lewis, as in going to Narnia through a wardrobe, though you won’t find a lion or a witch down there. Instead you’ll find tasters of what it’s like in Iceland, via interactive experiences, videos, clothing and products. More info in italics below

The space is free to enter but best to book a time slot here.

I was at yesterday evening's launch night (lovely cocktails and canapés!) and my recommendation when visiting (see more below) is to be sure to investigate everything in there and ask questions because the information isn’t immediately obvious. For instance, use any Qcodes and links there to access special offers etc.

I’ve been meaning to go to Iceland for decades, though I really don’t cope well with being in cold climates. But this has rekindled that urge and if Damon Albarn likes it there, then I’m sure I will too.
Promo stuff and info:
Icelandair has teamed up with a range of incredible Icelandic partners including The Blue Lagoon, Business Iceland and 66North to take you on an unexpected mini-break to Iceland (the country) – in London!
Iceland will literally be around the corner for one weekend only and everyone’s invited.
Experience the Blue Lagoon in London, icy wonders, the surprising landscapes and the unique airwaves that have arisen from this land of fire and ice – including surprise Icelandic style entertainment and performances. Navigate your way through a glacier, Relaxing in a geothermal spa, or sample the ever-growing music scene. There will even be chances to win a trip to the real Iceland, and more!
Icelandair Around The Corner is free to attend and open to everyone – click here.
Special events that will be taking place inside the space include:
A Blue Lagoon Soundbath event (Saturday 29th October from 9.30am to 10.30am and then on Sunday 30th October from 9.30am to 10.30am)
A Photo Exhibit and Talk from Benjamin Hardman (Friday 28th October from 12.30pm to 1pm and then on Saturday 29th October from 12.30pm to 1pm)
The Mini Airwaves festival, featuring live acts from the 2022 Airwaves Festival line-up and DJ (Saturday 29th October from 7.30pm to 10.30pm)
Family Fun Day (Sunday 30th October, with a sensory dampened hour taking place from 3.30pm)
No comments:

How to lift a coal hole cover plate – a dilemma

I have often pulled together collections of coal hole cover plates showing how diverse the range of designs can be. Most of them sport a pattern on them, often used for advertising, to make them anti-slip. I've also noticed how most show no visible signs of how these covers/lids might be lifted. Evidence about this process, or diagrams to explain the construction, has proved elusive or inconclusive. 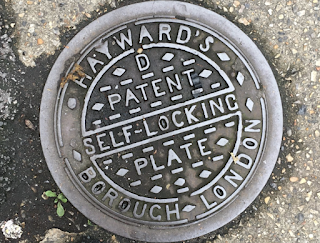 Whilst presenting a talk about coal holes at London Historians History in the Pub evening last month I asked the audience for ideas about their usage and the consensus was that the scullery maid would have pushed up the cover plate from the coal bunker below so that the delivery man could then remove the lid by hand. He would them drop it back into place after delivering the order. Being flush to the pavement, with no protruding lips to get a grip on, meant the lid was unlikely to be tampered with, or stolen/removed, and the coal below was as good as inaccessible via a short narrow access pipe barely big enough to squeeze your head through.

Ah, but then we have the dilemma of the 'self-locking' plates as shown above in the Hayward's example. This rather intimates a mechanism of some kind. Perhaps the maid pressed or released some kind of spring/catch below ground that allowed the plate to pop up proud of the pavement and when the plate was dropped back down into the outer casing the lock was reactivated, making the whole thing more secure

However, look closer at the pic and see that there are little notches each approx half long around each of the parts. On the plate there are four of them at 90 degrees to each other and on the ring there are six at 60 degrees. Perhaps the plate was rotated somehow to either align two pairs of notches to enable opening the unit, and/or dis-aligned to lock it. Oh, I don't know. Also, the plate is heavy, so how could they have rotated it? Perhaps a big magnet was involved?

Whatever the case, quite a few of these self-locking plates must have proved unsuccessful seeing as additional locking mechanisms were later added as per here, though I have noticed many more retro-fitted locks on these things that missive.

Another thought: Hayward's were the B&Q of their day and as such would most certainly have produced an extensive catalogue ... do you have any reference of these?

All suggestions welcome. Please use the comments section below or email me at jane@janeslondon.com

Walking along Camden Passage, Angel, Islington, on Sunday, I stopped between two colourful shops that face each other and mused how the zeitgeist at the moment is to slap a bright or gaudy colour right across the whole shopfront; woodwork, pipes, fascias, the lot.

Here they are at the top with a selection of eight others from Upper Street: 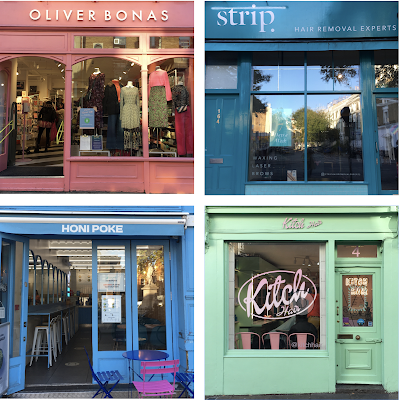 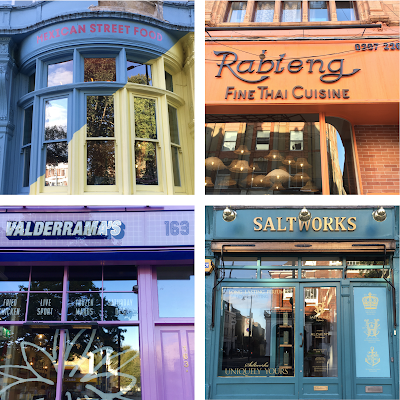