The Year Of The Dragon

It's the start of the Chinese New Year today, and this year it's the turn of the dragon.
More about chinese astrology signs etc here. I am a tiger... grr!!
For a a dragon with a difference, go to Spitalfileds Market and see Roger's wonderful balloon creation outside Giraffe restaurant.
I have put some images of dragon together before here and here, but I have since found some more firey beasts to add to my collection, and none are in Gerrard Street, Chinatown, where the main Chinese new year celebrations will be in full swing. 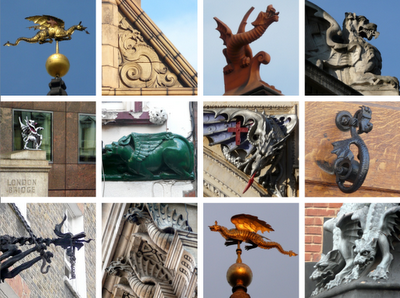 My very talented sister will be featured in an exhibition at The Riverside Gallery's Good Wood / Wood Works: Contemporary Wooden Art & Craft show at Richmond's Old Town Hall from 21st January to 7th April.
Go... and be inspired. It's free.

Below are some carved wooden pieces from the streets of London (clockwise from top left): Bishopsgate, Bayswater, Kennington, Bishopsgate, Clapham, Kings Cross. 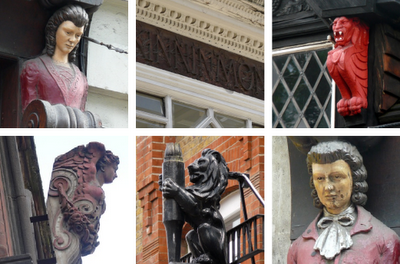 Here's a way to cheer up January....
On Monday 23rd giant ball of light, equivalent to that of 60,000 lightbulbs (or is it 260,000?), will be installed high above Trafalgar Square designed to brighten us up from dawn until dusk.
Weather permitting, it should look amazing at dawn break when the light effect will be at its most intense.
Sadly, I won't be around to see it this so please do get snapping and send me some links or photos.
Update:
Here's a video of the construction of the event
and here's another one of the 'sun' itself 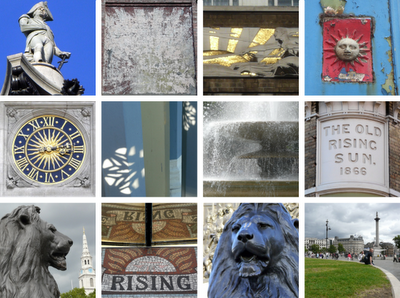 I have been discovered in LivingEtc

Thanks to littletree designs for blogging about me after seeing the piece in LivingEtc magazine.
No comments:

Celebrate Epiphany at The Connaught

I am a little behind with this...
Hélène Darroze, head chef at the lovely Connaught Hotel has created a special Galette des Rois to celebrate Epiphany (6th January) which marks the arrival of the Three Kings in the nativity story.
Hélène's Galette des Rois will be served with afternoon tea at the hotel during January and, if you are lucky, you may find a piece of French jewellery hidden within the puff pastry and frangipane making a lovely afternoon break even lovelier.
More information here.

Here are three British kings on London pubs in Leytonstone, Marylebone and Borough, plus a quirky alternative version in Clerkenwell:

What a boob! Breasts are go go go!

News this week is that thousands of women are to get their fake boobs de-commissioned by the NHS because the private clinics who installed them (yes, installed) in the first place say it isn't it's their responsibility. Our money is about to be spent on (in the most part) self-obsessed vain women who wanted quick fixes.
I agree with the clinics; after all no one forced these women to have operations they didn't want to have. The women made free choices to spend their own money on something they thought was going to make them feel better.

I can't be the only one who isn't surprised that the breasty bags of seepy goo are starting to break down and infect these women's bodies.
A thought: if they fall over in their silly high heels and break their legs are they now going to expect the shoe shops to pay up for that too? And, whilst I am on the high shoe subject, what about the osteopaths they are going to need sometime soon too? It's gonna get really expensive...
Yes, there are women whose lives have been radically improved after the loss and then replacement of a breast after cancer treatment, but on the flip side, I have actually heard mothers encouraging their 18 year old daughters to have a boob job; girls that look absolutely lovely as they are and should not have someone, least of all their mother, suggesting that they are sub-standard. That's wrong on so many levels.
The money might be better spent getting these women into therapy to help them understand why they are being duped into thinking they 'need' this invasive surgery in the first place. As I write this I am reminded that when my mother was receiving radiotherapy the nurses told her that women were often coming in to the hospital to ask for the treatment because they had heard that it destroys the hair follicles and was therefore better than waxing.
It's all about quick fixes. Getting the latest look. And it's been going on for centuries – I bet these women with their gravity-defying chests would probably be outraged at the beauty regimes of the past...
To get that perfectly pale look Elizabethan women applied lead directly to their skin to lighten it (a practice that dates back to the Ancient Greeks) and they used mercuric sulphide for those must-have cherry lips. Finally, a dab of belladonna to brighten the eyes. Ooh lovely. But no pain, no gain.
The Egyptians used a variety of metals to keep them looking attractive including lead sulphite and copper. More recently the Victorians used arsenic for so many things its hard to believe they lived as long as they did.
These days the beauty industry is still enticing woman to part with their money in the most macabre of ways. What will future generations think when they look back at all this? When they remember the women who thought it was normal to have their faces injected with poison for that constantly surprised yet dim look. And had bits of cows put in too for the perfect fishy pout?
Is your arse not round or pert enough? Whack in a a few bags of silicon to get that bootylicious behind. Too fat? Eat a few pies and get a man with an oversized dirt devil to vacuum it out for you.
Luckily I don't need all this. I have perfect breasts and a fabulous arse. Yeah.
Fried eggs for breakfast anyone? 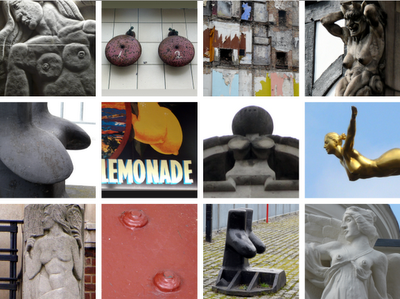 One Eye Grey now on Kindle

The erudite, informative and entertaining Mr Chris Roberts has just informed me that his collection of strange London tales, collectively known as One Eye Grey and previously available in pamphlet form, is now available on Kindle.
I urge you Kindlers to get clicking and downloading.
Enough said, because I have written about these tales before. 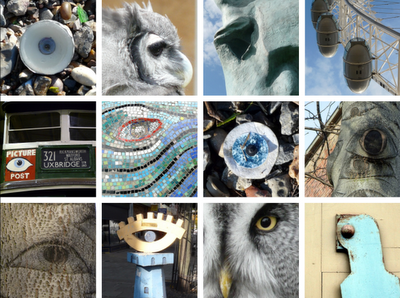 Tired of London, Tired of Life

The very lovely and lively Tom Jones has been suggesting a different thing to do in London every day on his site.
The book of the site is now available to buy. It's stuffed full of ideas so there'll be no more "what shall we do today?" moments.
Tom's been on The Robert Elms Show and on BBC London News promoting it (and, I am sure, many other promo opportunities that I missed).
I am chuffed to report that I am mentioned on the acknowledgements page within the same sentence as Samuel Johnson... praise indeed.
Well done Tom.
1 comment: