Ding dong merrily – mince pies at the ready – time for a bit of self promotion. 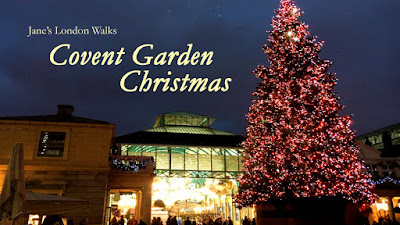 I have turned my Covent Garden Christmas lights tour into a virtual experience – Find it here.

More dates to be added through to 6th January. See the schedule here.

I'm also more than happy to lead the tour on foot – please do get in touch.

Travelling through Central London recently, admiring the view from the top deck of a bus, I couldn't help but notice the huge redevelopments are happening at the moment and how many gaping great holes there are in the ground. Covid-19 does not appear to have restricted the construction industry.

For instance, at New Oxford Street, just east of Centrepoint, there is a big whole where this has been demolished – there is now a completely clear view of Renzo's horrible coloured towers.

Turning the corner into Charing Cross Road, the new build around Tottenham Court Road station continues. Chunky great glass things replace the much-missed Astoria Theatre (which was my favourite live music venue) and other buildings and small streets in the vicinity. The huge glasshouse entrances to TottCtRd station still look out of place and out of alignment with their tall neighbour and it's evident that the glass within them has yet to be cleaned. Such a silly design – how could you clean them anyway?  Why do these things need to be so tall and ugly? Consider  and compare the flamboyant yet understed Metro entrances in Paris.

Keep travelling with me here. Buildings between Centrepoint and Denmark Place have evolved considerably of late. Denmark Street as a centre for live music has diminished considerably and Tin Pan Alley is no more. Opposite, on the corner of Manette Street, the pink-faced replacement for the Foyles building looks to be almost complete. Hurrah, at least, for the elegant beauty of the 1930s Central School of Art, now Foyles new home.

Don't get me wrong, I am not against change, I like to see the patchwork of history – all this knock down and replace is nothing new. Leases expire, buildings become unfit for purpose etc and need to be replaced. The Victorians, and the Georgians before them, rebuilt whole streets and, just pre-WWII there was another construction boom, but the amount of change happening at the moment in Central London is, for me, quite shocking.

And so we continue to Cambridge Circus and turn right into Shaftesbury Avenue. All looks to be as was until crash bang boom, the whole of the block behind Piccadilly's iconic advertising hoardings has been reduced to just that – an almost two-dimensional sign:

And, so, over into Piccadilly itself. Nothing to report until we get to the Ritz. There is a big development with Caffe Nero on the corner here is covered in plastic, I know not why, and then further along at the corner of Half Moon Street the red brick building's façade is all that remains. Though, as you can see from this older streetview there have been hoardings around it since at least 2008; it had been in a poor state for decades.

I decided after that to just look left at the park

It's just occured to me that I have efffectively taken you on a free virtual tour!