The best that London has to offer

London Ambassadors, a scheme run by London Mayor's office, is aiming to recruit 8000 volunteers who can help show off the best that London has to offer during the Olympic and Paralympic Games in 2012. Apply to be an Ambassador here. Or go to Facebook.
In conjunction with this drive they are also running a competition asking Londoners to recommend a place that they think no trip to the capital should be without. As per Jane's London this should be not just the usual visitor attractions; they are looking for hidden gems such as small museums, cafes, restaurants, shops, alleys, etc that are not on the usual tourist trails. The 60 winners will be chosen at random (which in my opinion is a bit daft) and will get a ‘Take Two London 2 for 1’ Voucher and Guide Book which contains £900 worth of potential savings to be cashed in at over 70 London attractions, restaurants, bars, museums, galleries and tours. Enter here.
The competition closes on 10th December 2010.

There are a lot of Christmas fairs and markets in London this year. Perhaps I am ultra-aware of this having left it too late in the year to apply for a stall at one of these markets to sell my own stuff.... ah well, next year...
Some of this year's bigger markets are listed here and here. But there are lots of smaller events worth checking out here, plus others this weekend in SW17, N16, and next weekend in SE17.
However, the good news is that I have managed to secure a stall at The Museum of Dockland's Festive Fair taking place on the eve of December 9th. There will be 50 stalls selling various kinds of unique arts and crafts, plus a bar, live music and carols, and the museum galleries will be open for the duration... so please do come along and say hello. 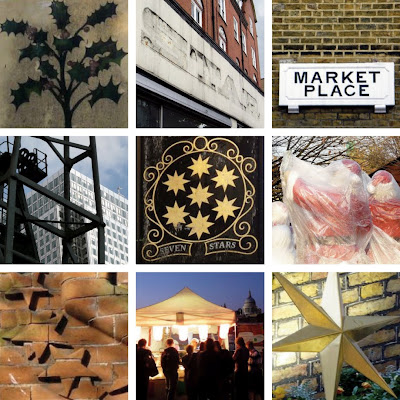 Bloody hell... has London gone ice skating mad?!
There are plenty of rinks here in London already – the indoor ones in Streatham, Finsbury Park and Romford, and the seasonal outdoor ones that have been about for years at Somerset House and Broadgate – but it feels like very other day I hear about yet another rink opening for the Christmas season. Have we gone ice skating mad?!
I say 'we' but I haven't attempted to skate for over 30 years. It wasn't a good night; I wasn't very good at it, my friend had her hand cut by another skater's blade when she fell over, and someone went home with my brand new wedges such that I had to go home sad and shoeless. Now I am dare try to ice skate in case I put my back out!
But if sliding about on slippy things is your kind of thing, here's a fairly comprehensive list of where to do it.

UKCG urging their worshippers to go into debt

I just read this in today's Times...
It seems the Universal Church of the Kingdom of God, which occupies the old Astoria/Rainbow building in Finsbury Park, is encouraging its congregation not to pay their personal bills so that they will have more money to give to 'God'.
UCKG say that only when people sacrifice all their worldly possessions will their financial prayers be answered. They even offer financial 'help' with this.
It saddens and angers me that this sort of thing is still going on, and less than a mile from my front door.
Read the articles here, though you have to subscribe to the Times site (I will attempt to upgrade this in due course). And here's a 'review' of the church.
The only positive thing I can say about all this is that having a church in residence has meant that the interior of the lovely old cinema has been kept relatively intact. You can wander in and have a look around – just be sure not part with any cash when you are there.
3 comments:

Bar Boulud at The Mandarin Oriental

Earlier this week, thanks to Travel Onion, I went for a lunchtime treat in Knightsbridge with a few other London bloggers. I wasn't sure this was gonna be my kind of thing as when I started this blog I wanted to be specifically about things on the streets. But I am so glad I accepted the invitation as the place and the people were lovely.
I'd have been happy just wandering the hotel's corridors, lobbies and staircases as the inside of the building is beautiful – a lovely mix of old England with touches of the East – but we were also taken inside some of the rooms including the spa, the beautiful and ornate dining room that overlooks Hyde Park, the original entrance on the park side of the building, a standard room (did they say approx £800 a night depending on the season?!) and then to the Royal Suite which was stunning... if you are interested in the price for a night there, then multiply that last room rate by about twelve!! If anyone needs a roommate for a night, just get in touch. (Actually, does that sound a bit forward?!)
After our tour we were treated to lunch in Bar Boulud on the ground floor. The food was scrumdicious (my own word!); plates of charcuterie consisting of patés, hams and terrines, plus seafood platters and salads, followed by a main course, my choice being one of their fantastic hand-made burgers – the one I had had foie gras in it but is only available on Sundays and Mondays.
Oh, and we had four different wines, all of which were explained (what's the word I want here?) to us by the Head Sommelier. Excellent! In a nut shell, I'd love to eat there again, especially as I was impressed at the competitive prices. But I suspect it'll be hard to get a table there soon as the place is becoming very popular. Rightly so.
Oh, and if it's not enough the hotel having David Boulud, it seems Heston Blumenthal is opening a restaurant there soon too, though the hotel's site says Autumn 2010.
And the light fittings throughout the whole building are gorgeous. 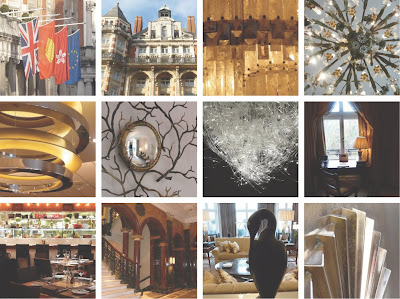 Walking from New North Road to Angel tube station via Prebend Street the other day I noticed that most of the pubs I passed were Lord this, Duchess that, Earl whatever.
So I have delved a bit deeper and found that within the N1 postcode there are.... eight Dukes (Cambridge, Clarence, Richmond, Sussex, two Wellingtons and two Yorks), two Duchesses of Kent, an Earl of Essex, the Marquess Tavern and a Marquis of Salisbury and Lords Clyde and Wolseley.
And there are lot of Royals about too – Kings Edward VI and VII, William IV, two George IVs, Charles I and the King of Denmark. Plus Princes Albert, Arthur, of Wales and Regent and a few heads and arms of non-specified Kings and Queens.
So what's all that about then? 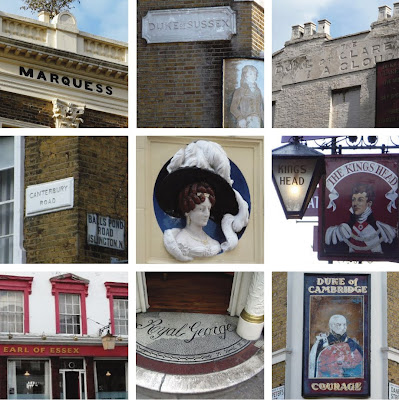 These are all fairly self-explanatory except the Balls Pond Road image which used to be the Marquis 0f Salisbury.
7 comments: 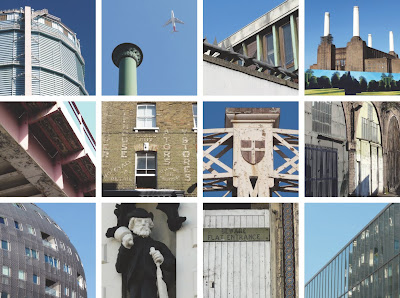 It's promo time!
Win a top night out in London...
Everyone likes a glass of bubbly and Freixenet are hosting a 'VIP competition' through Facebook – the prize is an evening out at an exclusive London venue where the winners will have a dance lesson with that gobby Brendan Cole of Strictly Come Dancing, quaff some lovely Cordon Negro cava and nibble on top quality canapés.
Click here... good luck!

Cruising under the Thames bridges

A few days ago I was lucky enough to travel on a widebeam cruiser along the Thames from Limehouse to Kingston.
It's as near as I have ever got to standing on a river. What a fantastic experience.
All in all we went under 19 road bridges, plus another eight foot, rail and lock bridges too. Actually, make that 10, if Hungerford and the two Golden Jubilee bridges count as three separate things.
I wondered if there was a mnemonic for remembering the names of the bridges in order. I cannot find anything specific but there has been a forum at Londonist on this very subject. My personal favourite is this one which covers the 12 road bridges shown below from Tower to Wandsworth. 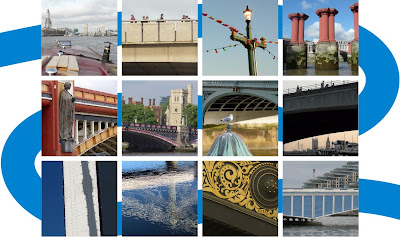 Only a couple of the above images of the 12 bridges in order, east to west, were actually taken on the day. I have just looked up some info on the figures on each side of Vauxhall Bridge – the east-facing ones represent local government, education, astronomy/science and the fine arts, and those on the west-facing side allude to architecture, pottery, engineering and agriculture (which I thought, with its scythe, looked like the grim reaper!). More here.
7 comments:

I love love love a fireworks display – did you see the one at the end of the Thames Festival earlier this year? – wow!
But gone are the glory days of Highbury Fields on Friday followed by Primrose Hill on Saturday, because fewer boroughs are putting on fireworks displays these days due to the costs. And a bit of H&S probably creeps in too. Those that are going ahead may have a nominal entrance fee – something like a £1 – which is fantastic value, especially when you consider that councils have been burning our money like this for years! I wonder what else it could have been better spent on...
Here's a list of organised displays in and around London this month.
ooh... aah... wooo... wow! 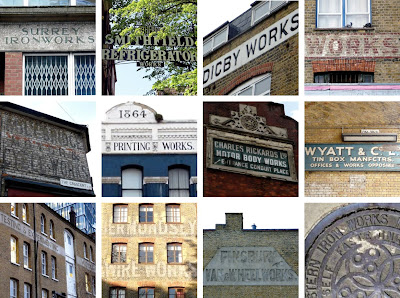