Last month I went out for strol and ended up in the the Camden and Primrose Hill area. I was just enjoying the bright weather, following my nose, look at stuff aimlessly. 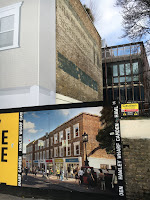 As I passed Camden Lock, walking northwards, I noticed that the +120 year old ghostsign for Edwards the tailor which overlooks the canal at Hawley Wharf might be soon lost to us. As you can see here the artist's impression on the hoarding shows a clean wall. I hope this will not be the case as these little hints of the past help to give the area a sense of history.
Moving on northwards I then stopped to wonder what happened to the big rocking chair that used to be on Camden Interiors, at No.19 on the corner of Hawley Avenue. It had been there for decades and was a really good identifier.  I am pretty sure it was still attached to the building after the furniture company moved out so I hope whoever removed it has made good reuse of it. 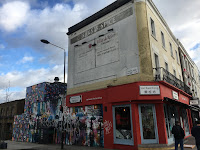 Then on the next corner, Hartland Road, there is a relatively new ghostsgign. Silks & Spice thai restaurant had also been there for decades but, perhaps, latterly struggled to compete with all the additional food outlets that opened up in the area over the past 20 years, specifically all the Asian streetfood within the Stables Market area opposite.
And so I continued up the road, fondly remembering happy days in the '90s meeting friends in The Lock Tavern when it was owned by Mick and Iris. Stuff hanging from the ceiling, doorstep sarnies, and oh those fireworks parties in the ramshackle garden!  They sold up and made quite a bit of money on it. Iris probably bought her own helicopter. The new owners tarted it up and used it for C4 TV productions such as Chris Evans' progs and the like. It's never been the same since.
And then past The Monarch, which is not The Monarch if you get what I mean, indeed neither is the Enterprise further up the road and, oh, I miss The Engine Room with its fab music quizzes attended by teams from NME and Melody Maker. Always packed, lively evenings.
And then amid my reminiscences.... BOOM!  Ouch!
I stopped in my tracks... one of my favourite ghostsigns and another one that features on my Camden ghostsgns walk (plug plug again) has been vandalised.
For +70 years this south-facing prime site has been showing us some understated hints of times gone by – a palimsest of signs advertised Johnson the bookbinder, Bacon the stationer and Laurence the draper. Today we can also add Man the egotist and whatever those other two bits underneath are supposed to be.
Below is how it used to look in Jan 2009 (slightly enhanced) and I am little annoyed with myself for not taking some pics last year as, since 2009, the sign had further faded such that the [older] draper's sign, had become the strongest element. 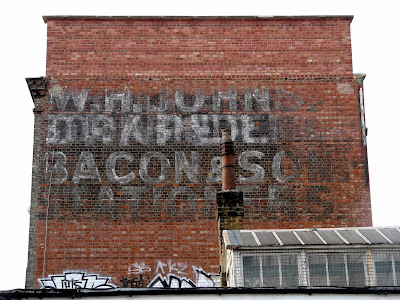 Ah well. What can we do? We can't hold on to everything. The sign will still feature on my tour. And its defacement will help to highlight the plight of these ads... blimey sound like I am talking about endangered animals here...!
No comments:

A while back I wrote about this doorway in N1.
I completely forgot about it until I was looking in the directories for something else along The Cally and found that for at least 1915-39 this was a branch of Frost or Frosts or Frost's*.
This local grocery chain was not as common as say Lipton's, Sainsbury's or Home & Colonial Stores but they did employ the ubiquitous Victorian script style for their 'logo', as per Boots and CocaCola.
I discoved the name Frost at the Cally Rd location – er, why hadn't I checked theis before?
This reminded me of the lovely old shops I photographed Wandsworth which includes this one:
Further sleuthing... here's the full list of their shops in 1939: 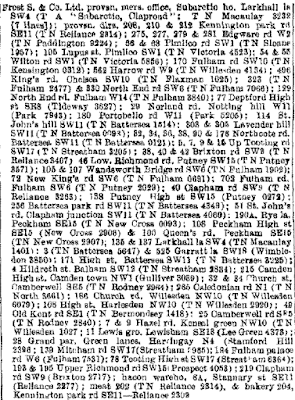 And I found an old pic of how one of their stores might have looked – I am guessing c1910:
*My [pedantic?] eye for detail has spotted that the possessive apostophe and/or plural name isn't consistent. As you can see from the 1939 directory, above, they are listed as 'S. Frost & Co. Ltd., provision merchants, yet for the specific Wandsworth entry in the same directory they are shown as 'provision dealers'. I am not about to check them all...!
No comments: