Black Black Black!! I see black!
In the past few years a relatively new shopping period has taken over our high streets. It's called Black Friday and as far as I can ascertain, this is the term given to the first shopping day after the Thanksgiving weekend in the US when Americans were actually out spending their money again, thereby taking the sellers out of the red and into the black vis-a-vis their bank statements.
I became properly aware of it a few years ago when I took part in a selling fair in the Salvation Army hall close to Oxford Street the day after Black Friday and noticed no-one was coming inside to see all our fine hand-crafted wares. Outside I witnessed a river of shoppers almost glued together at the shoulders moving like a ice floe along the pavement in tunnel vision 'sale' mode. Shops were enticing customers to spend by offering discount prices – this confused me because it was a Saturday and the term is Black Friday. I joked that the following year it would probably be Black Friday Weekend, and then Black Friday Fortnight and then by 2018 it would be Black Friday Month.
Well, that's exactly what seems to have happened. The ads on the TV tell me just that – it's Black Friday November! Or Black Friday Month!
This make a pub's 'Happy Hour' lasting from 6-9pm seem almost pathetic!
Anyway. Here are some black things I have spotted above and along London's streets:

Find me on Sunday 2nd December at my stall on Navigator Square adjacent to Archway tube station where I will be selling my cards and prints including locally-themed Christmas cards, plus my Christmas tree earrings all of which you can see in this montage re last year's event.
It's a colourful, lively day with lots to see and/or do so please do pop by and say hello.

This Saturday I will be leading a walk around Camden Town, its High Street and the area around Hampstead Lock, following a trail of ghostsigns that are still visible on the walls above the streets.

The title of the walk references the different kind of factories, shops and businesses that used to be in the Camden are before the markets made use of the empty spaces and turned the area into one of London's top tourist attractions. The walk title is still relevant today, but in a different way.

Many years ago I wrote a piece on here about these faded tradesmen signs that can still be seen along the main road. These will feature on the tour, plus many others that not so difficult to decipher..
I hope you an join me. 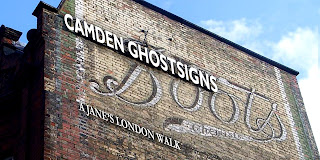