The pillars of NYT

The building that is home to the National Youth Theatre, 443-5 Holloway Rd, N7, was originally built as Holloway Hall in 1865 and used for meetings, events and shows including, in 1873, 'Aborigine travelling minstrels' and a baby elephant (not on stage at the same time!)
NYT have plans in place to make some clever architectural changes to the building and I recently went inside during one of their open evenings to see how the spaces will be revamped.
The large area at the rear of the ground floor, which 150 years ago was the  auditorium, is today used to create stage sets and I noticed that many of the columns within are 'decorated' with interesting paint patterns and graffiti. 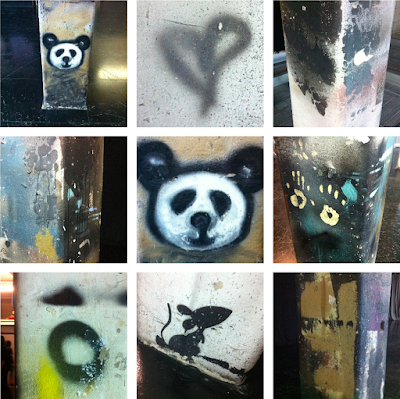 I understand that these columns will be removed one renovations are complete to create an open, even more useable, unimpeded space.
Keep your eye on local press for updates about NYT's improvements.

Earlier this week, whilst hunting for something else in amongst my suitcases of collected bric-a-brac, I rediscovered my small collection of opera and field glasses.
Oh what a distraction!
Beautiful little pocket-sized binoculars made of brass (and other metals) and/or bakelite, many with mother-of-pearl, leather or shagreen embellishment. And most of them still in their perfect little pigskin pouches. OK, that was just for alliteration – I mean carrying/protective cases.
Someone recently suggested to me that they were not worth much, that they had no value, and asked me if I used glasses at the opera these days. A bit of a daft question as I don't go to the opera! And also daft because one could say that Chinese tea caddies and Victorian children's dresses are also not used these days but that doesn't mean they aren't worth anything. I believe what he meant was that these are just collectables; they aren't top dollar items. Certainly not worth insuring.
Nevertheless I thought I'd do a bit of research on them.
The pair that it turns out to be most intriguing, for me as a Londoner, is the pair that when the centre wheel is at full twist, words can be seen on the shafts that read; "Sold By C. BAKER, Optician" on the left side, and "244 High Holborn, London" on the right.
So I got got to googling etc. It seems Baker was listed as a company as early as 1765 and by 1854 they had moved from premises at 51 Gt Queen Street, to 244 High Holborn, listed as an "optical and surgical instrument maker".  Interesting that the engraving reads "Sold by" rather than 'Made by". Hmmmm. Ponder, ponder.
My Kelly's Directory of 1895 shows that Baker was at No.243 with his instruments and also at No.244 as an optician. By 1915 there are five companies listed at No.244 address including another optician.
The 1939 directory shows that 242-243 has become The Holborn Empire music hall with Baker as scientific instrument maker at no244 sharing the building with Ascot Gas Water Heaters. At this time ads show Baker is making full use of the theatre next door as a signpost. I like to think he would have had a display of opera glasses in his shop window ready to catch the eye of theatre-goers.
Moving forward quickly... in 1963 the Vickers company acquired C.Baker Ltd's microscope factory which later became Vickers Instruments.
It's all here on Grace's Guide if you want to read it for yourself.

Of my other binoculars, the ones that also interest me are my two compact late-20s/early-30s Bakelite pairs made by A. Kershaw & Son of Leeds. I am particularly fond of the ultramarine blue ones like these but bright blue. In 1920 the Kershaw company had various premises across the UK including offices/shop at 3 Soho Square. They had previously claimed to produce "the World's first cinematograph projector". By 1964 the company was swallowed up to the Rank Organisation.
And I also have some diddy little opera glasses made by Colmont of Paris; a company that I am told was one of the best French companies of this type back in the day. Ooh. More research needed.
No comments:

An elephantine enigma – what a load of tripe

I recently asked help with any information about this little building that used to be at 18 Market Road, N7, mid-way on the north side between The White Horse (Gin Palace) and Caledonian Rd.
As you can see below, when I took a photo in 2008, it had dancing trumpeting elephants on the front. I had wondered if it had been a theatre or something similar.
It has since been replaced – see Google Streetview 2008 and click though to see that it had been demolished by 2012.
Joe, a friend who grew up in the area, told me he recalls it as The Electric Cinema or similar. But I can't find it mentioned in Chris Draper's Islington Cinemas and Film Studios book.
Further sleuthing in the Kelly's street directory of 1939 (right) shows J. L. Henson, tripe dresser at this address. The company must have been here pre WWII but I can see nothing listed in 1915 and 1895.
Hmmm. Ponder, ponder.
And then recently I met Alan. He's another person who is always looking up, looking down, and questioning things.
Alan tells me that in the 1970s he worked in this building when it was Otaco Ltd. He tells me that the empty meat-related buildings in the area were taken over at that time mostly by businesses related to the motor trade.
He also directed me to a pic of the building in 1962-4 that clearly shows the signage for the tripe factory:
As you can see, there were no elephants in the 1960s or 1970s.
The black and white pic is available from a few online photo libraries and In all instances it is credited to English Heritage with John Gay as 'artist'. All tag this pic as 26-40 Vale Royal, Holloway, which is just down the hill off York Way and certainly not part of Holloway! This is a great example of people just copying and pasting info without checking things.
My 1939 directory shows that Edmund Martin Ltd*, another tripe dresser, was at 22-46 Vale Royal. but Henson did indeed have premises there but not until 1962 when they vacated the Market Road premises as shown here in a document about offensive trading. The link also indicates that Henson had an unauthorised fat melting site in Hornsey Rd near the junction of Tollington Park – that's a stone's throw from my home – ugh!
I can find no info about about Truman Steven/s as shown in this 1960s pic.

So, enough of all this tripe – back to the elephantine enigma. When did the trumpeting beasts appear?
I have a few ideas...
1. If Henson's factory was converted into a theatre/cinema, as my mate Joe recalls, then it couldn't have been until the mid-60s and only for a short while; possibly for a decade until the motor trade moved in.
2. Or perhaps the elephants were added in the 1980s after the car companies moved away? The buildings would have again been standing derelict and could have been put to good use. Consider that there are playgrounds and sports facilities opposite = lots of children. Perhaps it was at this time that the building was used as a temporary cinema and this is when the elephants were added (children like dancing animals and the ref to a tripe factory might have been obscured to avoid offence and confusion).
3. Or (and here's my latest idea) it might have been used as a film location?

Alan tells me has some other leads to investigate and will get back to me...
Watch this space
All help welcome.

*You might recall that Edmund Martin Ltd had a shop on Lindsey Street ,facing the eastern side of Smithfield market, was demolished to make way for The Elizabeth Line. Boo hoo. Next door was a marvellous Miami-style 1930s building, also demolished, which I am going to be featuring Smithfield Art Deco walking tour, coming soon.
2 comments:

Shocking news.
On Sunday last I was leading my Art Deco Spitalfields tour and we were heading northwards up Bishopsgate. The next stop was to be Niclar house with its 1930s castellated faience tiled façade. I had already pre-warned my group that this end of the street was in the process of being renovated and that the building we were about to see and talk about had been behind nets and scaffold for the past few months – but never mind, I had pictures to show them and plenty to talk about.

But when we got there, oh the disappointment and shock (and tongue-biting frustration):
Where is façadism when you really need it?
Norton Folgate sits at the upper end of Bishopsgate and has for years been cause of dispute about the conservation of its last remaining historic buildings. However, the buildings that abut Norton Folgate were not included as they did not form part of the same street – they appear[ed] to be a continuation but they actually form[ed] the first section of Shoreditch High Street, which had become separated from the rest of that road when the railway arrived.
Niclar House at No3-8 Shoreditch High Street was built as the swanky public/street-facing offices and showrooms of Nicholls and Clarke, plumbers' and builders' supplies who, since 1875, had made very good use of the adjacent railway to ship their products all over the country from their huge warehouses in Blossom Street at the rear (often used as a film location). This tiled building had repaced the company's Victorian Gothic, telling everyone that althjough they were an old company, the products inside were modern.
In June the demolition crew arrived. The bulk of the building had been reduced to rubble and The Art Deco façade was covered with scaffolding, netting and opaque sheeting and I rather hoped that it was going to be protected and saved.
But no. The powers-that-be and the greedy developers obviously don't think that unique Art Deco buildings are significant. Nor do they appear to have any regard for what's left of the Victorian streetscape. This would also further explain the loss of The Water Poet public house which formed part of the Norton Folgate Conservation Area. As mentioned above, Niclar House, being in Shoreditch High Street, was outside that half-arsedly-protected zone and hence the demolition without discussion. It will be replaced with a huge multi-storey office block* and the Norton Folgate block will be partly façaded, but only the four red brick fronted buildings. A big shame to lose an evocative patchwork of architectural history.
I wonder what happened to all those lovely 1930's tiles and the clock parts? Were they saved and sold on? I hope so.
Also see The art deco clock.
Nicholls & Clarke still trade today
*I feature this building on my Demolished Art Deco – Gone But Not Forgotten online talk via Zoom – see Jane's London Walks for more info.
1 comment: