Inside the Human Body

That marvellous Michael Mosley has done it again and made some more wonderfully informative TV programmes called 'Inside The Human Body'.
If you missed them, hunt them out on replay or find selected excerpts on the web. 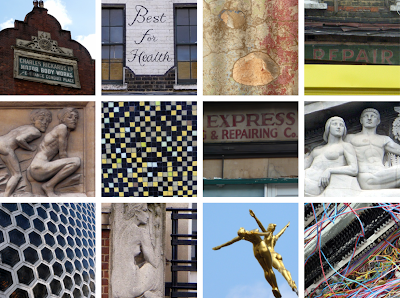 Our bodies are magnificient machines and we take them for granted. I have learned that we effectively get a new skeleton every 10 years, new skin every month and our stomach lining replaces every 3 days. And we don't even notice that all this is happening. We really are amazing.
Hunting for these pics, some of which may appear to make no sense at all unless you have seen the programmes, reminded me that I put together some collections of body parts a while back... here and here.... and in December my own body was letting me down. But my personal mini-army of repair bugs fixed me... Wow!
Top row: Paddington, Stepney, Wapping, Homerton
Middle row: St James's, Gray's Inn Rd, Caledonian Rd, Bloomsbury Sq
Bottom row: Smithfield, Bloomsbury, Haymarket, Highgate
No comments:

Well, yes, you can go for a walk yourself – I do it myself all the time. And every now and then I go on a guided walk to hear about a certain area or specific things. Some are good, and some are all walk and no information – it all depends on the tour guide – but I've always come away form a walk having learned or discovered something new.
This weekend, 28th and 29th May, Walk London are putting on lots of free led walks all over the Capital.
There are more walks to go on then just the Jack The Ripper and ghost ones, you know. Get your comfy shoes on and get out there!
Fingers crossed that the weather is nice...
Some walk-themed pics: 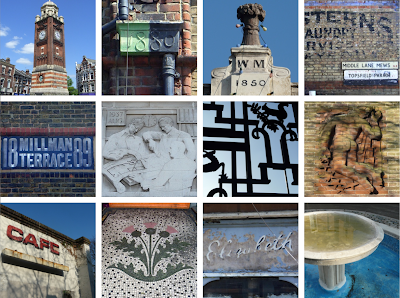 Faust at The Coliseum

Terry Gilliam has made a few of my favourite films; Brazil, Fisher King and Twelve Monkeys. Some of his other ones are just plain silly. He has never understood the term ‘less is more’. Bless him for that.
So I thought his OTT style would be well-suited to the opera stage, and when a friend offered me a ticket I jumped at it. This latest production by the ENO is in English and set in Nazi Germany.
I must admit I didn’t know the story before I went. I had a rough idea about faust selling his soul to the devil and all that, but no more. So, here is my own personal understanding of what took place on the stage in front of me last night (bear in mind a lot of this may be incorrect; it’s only my interpretation):
Baldy devilly man Mephistopheles introduces us to the story. Cut to Faust having a nice time in the forest writing on some strange unfolding blackboard (why?), singing badly. He is accosted by 3 young people and then moves to higher ground where later he sees a load of forest people come out to play at night. One is a man with a beard dressed as the May Queen who gets a bit fresh with F.
Then a handful of kings and heads of different Euro lands try to carve up the map but it turns into war... Faust stumbling through fields of dead people, and he ends up performing surgery on the wounded. (Oh, so he’s a doctor? Was I supposed to know that?).
Meph takes F to a beer keller full of horrible bad people. F not impressed. F leaves disgusted, and sleeps.
Meph takes him to a big party of toffs in the forest. Faust thinks one woman is his true love Marguerite (who hell she? Where did she pop up from? Had I missed something?)
F and Meph in Marg’s flat. F sniffing her pillow and being weird and creepily obsessed. He hides behind curtain. She comes back, puts on a blond wig to hide her Jew-ness and sings about some old King bloke. Later F appears, she is really pleased to see him and they dry hump on the bed urged on my Meph. Outside Jews being beaten and put on trains. Marg arrested too and somehow everyone knows what she’s been up to.
F goes back to the forest and sulks. Meph says if F will serve him forever he will take F to Marg. Great scene with bike journey. Meph has lied – bike crashes. F dies and goes to hell. Turns out Meph only wanted F’s soul. Never trust a devil eh?! Final scene lots of dead people heaped up in a pile reminicient of Belson.
Many of Gilliam’s visuals were really clever. And just as well, as I needed the them to get my mind off some of the dreadful music. In fact I was rather bored by it in many places esp as in this promo Gilliam talks about Berlioz’s loud dramatic score; that you 'resonate' when you hear his music. Not so for me. I had been looking forward to losing myself in the loud and powerful… I cannot recall a single refrain.
And then there’s the singing. Opera is often maligned by many people for it just sounding like someone is just giving us a bad running commentary about what they are doing in the ‘I am singing what I am doing' style. It's sort of like Facebook on stage.
Perhaps I should start singing, “I am sitting AT my comPUterrrr…. I am writing a blog POST… the weather outside is sUnny…”? The caps are there for emphasis/loudness to highlight the parts that this style of singing highlights – the wrong, most meaningless, word in almost every instance.
My conclusion as to how all this happens is that this may not have been a problem sung in the original French… perhaps the words that need emphasis fall in the correct place/ on the right note? But then that doesn’t solve my other observation that in many cases what is being said-sung seems to be completely at odds with the what the orchestra is playing.
Oh I dunno. It looked good though. And I am glad I went.
And a good thing is I now have this on my brain.

Pics above include devils from Cornhill and Praed Street
8 comments:

Last night five of us blogger types met at the wonderful Hunterian Museum and took part in a quiz about London at organised by M@ at Londonist as part of Museums at Night.
Well, can you bloody believe it? We won!
I am still in shock.
It was nothing to do with me.... Ian and Caroline were our star players. I am blessed to know such knowledgeable people. Tom, Malcolm and I did a lot of agreeing with them whilst nodding our heads sagely. Or we asked them, "really?" or "was it?" or "did he?"... "oh, OK, put that down then. Oh... you have".
Tom tried to draw attention to my jewellery but the Hunterian people weren't too pleased about that! Oops. Sweet of him to try though.
I am embarrassed to admit that I'd never been to the Hunterian Museum before. It's been on my list for ages and probably because it's so central and easy to get to I haven't made the effort and keep putting it off. I did the same with the John Soane's Museum on the opposite side of the square until about 6 years ago. Both are well worth a visit and stuffed full of fabuolusly interesting stuff (stuff?!). And they are free too.
Lincoln's Inn sits within Bloomsbury/Midtown(!)'s Museum Mile... click here for more.
And many of London's major and larger museums are also open late on certain evenings of the week or once every month. See here and here for more info.
I think 13 links is more than enough for one post, so I'll stop now.
3 comments:

As I mentioned the other week, Liz has just reached a milestone.
She'll have to stick it out another 52 months or so to take Victoria's title. 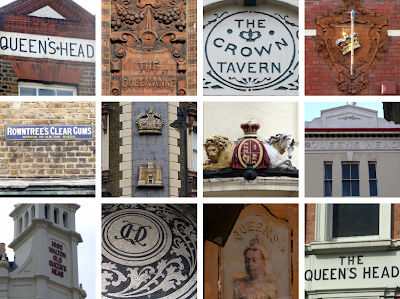 Scarcely a evening goes by now that I don't see a fox or two trotting along the street to who knows where.
Last September I found a handsome young male lounging on my deck – he practically posed for photos (see below).
This morning I look out of the window and find that there's a vixen and four cubs at the end of the garden (second row of pics). And they have cleverly dug away the slate chippings to access the space under the deck so that the cubs are safe whilst she and daddy fox scour the streets of N7 for KFC left-overs.