A wander in North London

Continue walking north. Hints of the past are really noticeable along this stretch of the road, especially the cottages either of the Vine pub which back onto College Lane. As you go under the railway bridge look at the parade of shops etc on the other/west side of the road and imagine how this area might have looked 100 years ago.

An interesting guided walk following on from my visit to Boston Manor House, starting near the GlaxoSmithKline building and ending in Brentford town centre. 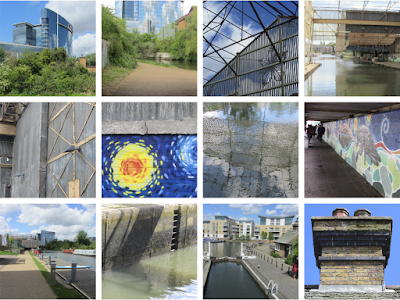 I have never walked around that area before and was impressed how lovely it is. Apart from the flyover and the bloody planes on the Heathrow flightpath.
More about the Brentford area of The Grand Union Canal here.
No comments:

Daniel Maclise: The Waterloo Cartoon at The Royal Academy 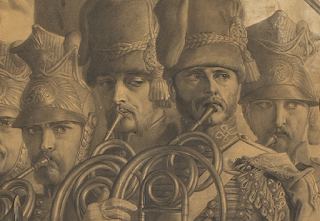 Marvellous!!!!
The scale and quality of this is staggering – and it's just a sketch!
Go and see this.
NOW!!

In the side room there are some fabulously amusing satirical cartoons drawn by the French showing their depictions of the British soldiers.

Such a shame that postcards or prints are not available.

On either side of Highgate Hill, just north of Archway Station you will find a lot of hospital buildings, some pleasing, some ugly, some neglected, and some over 150 years old.
There have been a lot of hospitals and a lot of name changes on these sites over the years. In the following paragraphs I have done my best to get the information correct. However, if you spot any errors, please do let me know.  Here goes...


Originally built in 1848 on the nine-acre site of an old leper colony as the Highgate Smallpox and Vaccination Hospital; one of only two isolation hospitals in London dealing with the smallpox epidemic of that era (the other one being the London Fever Hospital in Liverpool Road, approx 2.5 miles further south). The HSVH was supported by voluntary contributions and in 1867 had 108 beds. It closed in 1896.
In 1900, the site was officially reopened by the Duke and Duchess of York as the Highgate Hill [workhouse] Infirmary with 800 beds.
Then, in 1914 it became the Islington Infirmary (II). Five large linked blocks (shown above) had been added by 1920 and some of the original buildings were converted into a nurses' home which was accessed via a tunnel.
During the same period the Holborn Union Infirmary opened in 1879 in the southwest corner of the site with its main entrance on Archway Road (still intact and visible today). It had separate blocks for male and female patients in 625 beds. In 1921 the name was changed to the Holborn and Finsbury Hospital (HFH).
In 1930 the London County Council (LCC) took over the whole site – HFH was renamed St Mary's Hospital, and II became Archway Hospital. By 1948 both had merged with Highgate Hospital across the road to become part of The Whittington Hospital.


The modern hospital
The latest buildings of the Whittington Hospital on the opposite side of Highgate Hill are a stark contrast in architectural design.
Accident and Emergency, out Patients, Pathology and Imaging (X-ray) departments opened on the western side of Highgate Hill in 1977, and in 1980 a six-storey psychiatric wing was built. Further extensions and new buildings were opened in 1992. The entrance in Magdala Avenue was completed in 2008.

The Highgate Wing
On the Dartmouth Park Hill side of the Whittington Hospital estate there are some nice old brick buildings dating from 1869 from when this was The St Pancras Union Infirmary (later to become the Central London Sick Asylum District, then the St Pancras Union and subsequently the North Infirmary). Florence Nightingale has been quoted as saying that in its day the infirmary was "the finest metropolitan hospital". Edith Cavell worked there as a Night Sister in 1901.
When the LCC took over this site in 1930 they renamed it Highgate Hospital. By 1945 it had been grouped in with its neighbours Archway Hospital and St Mary's Hospital to form The Whittington Hospital as part of the NHS.

Why Whittington?
The grouping of all the three hospitals (Archway, St Mary's and Highgate) into one meant a new name was needed. "Trinity" was a front runner, but "Whittington" won. A well-known folktale tells us that Dick Whittington was walking on Highgate Hill when he heard the bells of Bow telling him to "turn again, turn again". The event is commemorated by a statue of his cat on The Whittington Stone on Highgate Hill (shown above, bottom right). He subsequently became Lord Mayor of London three times.

Did you know there is a fully-functioning windmill in the back streets of Brixton within the aptly named Windmill Park? 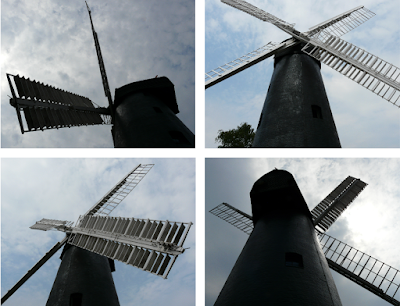 A windmill has stood on this site since 1816. This is one of only a handful left standing in London. The bonus is that this mill, rather than having been turned into living space, or similar, produces an excellent finely-ground flour which is available to buy in the adjacent cafe. Also available; tours, events, arty things, children's activities and more besides – see here

On the streets nearby I spotted some other these nice things:

You may recall that earlier this year I visited two of London's livery company halls, namely The Drapers and The Cutlers.
Well here are some pics I took whilst on a tour of The Worshipful Company of Vintners' livery hall. Situated on almost on Southwark Bridge, it is a fine building with a rich history, lots to see and plenty of interesting stories to hear about.

On Sunday 23rd August I met up with a group of friends for a Forage on The Foreshore. This time we met late morning outside The Angel pub at Rotherhithe with a plan to walk east towards.
The weather forecast had not been favourable and so we were not surprised that soon after we hit the foreshore the clouds broke. We managed to stay beachside for just over an hour before the rain set in and retired to The Mayflower for lunch where we assessed our finds including the usual bits of pottery, clay pipe, glass and metal fragments, plus an old leathermakers awl.
The sky cleared so we continued eastwards along the Thames Path to Greenwich...

We then popped in to Surrey Docks Farm; I will post about that separately sometime soon.

What a great day out. Thanks to all who came along!

More Info
Please note that finding specific info on the area for the above has proved difficult and I have as good as given up. Googling the streets and squares tends to results in lists from estate agents. Wikipedia gives a rough outline of the general area here.

Why is the UK still knocking down historic cinemas?

That's the heading on this article from BBC News.
Well I don't know.
Of the London cinemas that remain but are no longer used for their orginal purpose many have been gutted and used for other things. The only ones that seem to have retained their interiors are now being used as churches or pubs. Many others are now converted into shops or other businesses and oly hints of their once sparkling past can be seen on the street-facing façades.

Many more architecturally interesting London cinemas have been reduced to rubble over the decades, mostly since the 1970s. And, to me, it just beggars belief that the developers didn't at least retain the ornate façades or re-use some of the lovely bricks and tiles. (Note to self: Rein it in Jane, you about to start ranting about modern glass architecture with a projected lifespan of 15 years...whoa!)
Seeing as everything these days, films, music, etc., is available as downloads, or on demand, for how long will the few magnificent palaces that remain, some of which I show below, still stand?


My two favourite cinemas used to sit adjacent to each other in Camden.
The Parkway was a lovely old Art Deco cinema with a red dralon seats and just two screens. I particularly recall seeing Oliver Stone's JFK on the big screen there in 1991 whilst munching on a box of Maltesers. The small above the ticket office showed independent films and there was a piano on the first floor next to the confectionery and drinks counter and very often someone was tinkling the ivories before the film began. I am pretty sure that I read that John Boorman used the cinema when filming parts of Hope and Glory. There is a great scene when the lad who is the lead in the film can be seen leaning forward in the first row of the circle transfixed by the film he is watching.
The cinema was gutted and modernised just prior to the last offensive about saving our old cinemas. Really bad timing and such a sad loss.
The Camden Plaza around the corner, opposite the tube station, showed art house films and was simpler inside, but I recall the small entrance lobby/ticket hall was wood panelled, almost Tudor in design. At one point the cinema formed part of the Gaumont chain (later Odeon) and a pic of the faded sign on the side of the building is shown below.

It's just occurred to me that many long gone cinemas gave their names to the junction on which they sat* as in the case of The Savoy Cinema in Acton (Savoy Circus). I used to drive past it often in the late 1990s and I just took it for granted. Then hoardings went up around it and very soon there was a big empty space. It stood empty like a barren wasteland for years. Below are some comparison pics. Amazingly I cannot find any older pics than these from 1971.

Lots of great pics and info about demolished London cinemas can be found here – click the tabs under the map to see other categories.

*I have often wondered whether there was a cinema called The Apex at Apex Corner. I have so far drawn a blank about where this name come from. Or possibly there was a shop? Whatever it was, it's now long gone. Londonist wrote a piece about the naming of road junctions a while back... does anyone out there have any more info?
No comments: