On the Foreshore at Limehouse

Earlier this month a few friends joined me for a forage on the foreshore at Limehouse.

The tide was particularly low that day and the sun was shining on us too. Afterwards we went to a nearby pub for food and chats. All-in-all a very nice day out.
If you'd like to come and join me sometime please do get in touch via email (see above).  The next meet up will be the morning of Sunday 10th April.
Please note that I hold an official Port Of London Authority Foreshore Permit – there are restrictions to what you are allowed to do when accessing the Thames beaches.
No comments:

Ooh I do love an old shop front, especially if it still retains its original curved window and tiled entrance. London has lost most of these beautiful old shops – only solitary examples remain here and there hinting at how the whole terrace might have looked 100 years ago.
Often the best examples of this kind are found outside London, say in seaside towns that lost favour at the end of the last century such as Leigh-On-Sea, Walton-On-Thames, Margate or Southsea, all of which have more recently become appreciated (as have their house prices).
However, some really good examples of early 20th century shopping streets can be found in Muswell Hill, London N10 and, in particular along the southern end of Fortis Green Road.

Walking north from the Art Deco cinema at the junction of Muswell Hill Broadway up to Queen's Avenue notice how almost every doorway on both sides of Fortis Green Road still retains its original curved window and tiled entrances leading to the upstairs apartments.
Also, be sure to stop and admire New Century Barbers on the corner of First Avenue, which also retains some fabulous period features and signs, and has a lot of archive photos of the local area.

I am always on the look out for signs of original shop or pub names.
Often I spot these hints of the past embedded in the masonry near the top of a building or on hand-painted signs.
The ones that cheer me the most are the often intricate floor mosaics that can be found in the entrances.

Saddlery is all the equestrian bits and pieces needed to deck out a horse, hence The Saddlers' Hall contains lots of beautiful and unusual leatherwork and bridleware, plus other related items such as silverware, artefacts and paintings including a lovely one of Princess Anne who, on 20th July 2015, was installed as the The Saddlers' Company's Third Perpetual Master (see more about this position below). Anne shares my birthday and therefore is my favourite Royal. 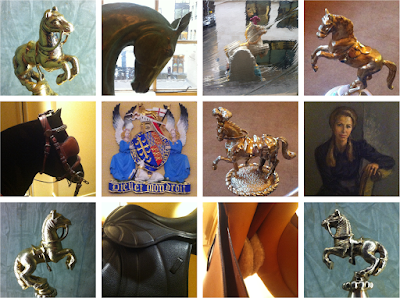 The Saddlers' Hall website doesn't give much info re history – it appears to be mainly about venue hire. Well, I suppose they need the money for the upkeep of the place and looks to be a great place for a posh party!

I have been singing a nursery rhyme this whilst writing this so I added a line from it into the title and put the whole thing here. I think I might be regressing!
Horsey, horsey, don't you stop
Just let your feet go clippity-clop
Your tail goes swish and your wheels go round
Giddy-up, we're homeward bound!

Also see my posts about tours of the Drapers', Cutlers', Skinners' and Vintners' halls, and the Mercers' Maiden. Or click on Livery Halls in the Labels list to the left.

Perpetual Master: An historic title specifically mentioned in the The Saddlers’ Company Royal Charter, created in 1737 for Prince Frederick, Prince of Wales. The Saddlers’ Company considers it to be the highest accolade that it can bestow. HRH Prince Arthur, The Duke of Connaught and Strathearn, filled the role between 1906 and 1942.
The Princess Royal was made an Honorary Freeman of the Saddlers’ Company on 30th November 1971 when she became a Yeoman as a 'distinguished user of the saddle' having won the Individual Gold Medal in the European Eventing Championships earlier that year.
When HRH is in the Hall on Saddlers’ business or when she represents the Company elsewhere, she is called “Master”. The role of Perpetual Master is not a day-to-day executive position. When HRH is not available the Prime Warden Saddler Mr Charles Barclay fulfills all her duties as effective head of the Company.
2 comments:

Ventriloquism ... it's moved on since the days of Lord Charles and Orville.

This week and next Nina Conti brings to us her own version of this genre. Nina has, quite justly won awards for her ingenuity in this field. You may have seen her amusing and genuinely moving BAFTA nominated film on the subject.
I saw the Criterion show last night – Nina makes everything she is doing really obvious and yet we forget she is the voice behind everything we are hearing. She uses strap-on masks (as modelled by Nina above) on members of the audience and every night is different being as it's dependent on audience participation. It's a lot of hard work for her and yet she makes it look effortless.
That's all very clever, but my favourite bits were when Monk the monkey was [literally] on-hand making his often outrageous observations.

Until 12th March. See here for more details and how to book tickets.

Below are some other monkeys and apes I have spotted on my travels: