Earlier week Sam Roberts contacted me to see if I could help with an enquiry he'd recieved about a faded sign near to the southern tip of Clissold Park.
Adam Broude had been in touch to ask if anyone had further info about this sign at the western end of Leconfield Road. He'd managed to decipher a few words including 'General' and  'Landaulettes' so, having stood on that same spot a few weeks back, pondering the same, I thought I best get sleuthing.
Adam Broude had taken the pic below and managed to decipher a few words inclding 'General' and  'Landaulettes' and he wondered if tere ws any more info available.
I consulted a few old directories and decided we have two signs here; one for a company providing laundry and shirt mending facilities and a second ad for a company providing upmarket vehicles for hire. Landaulettes are coupé versions landaus often used by dignitaries etc.
As for deciphering the sign, the best I can see and guess at, so far, is:

Collar dressers were people who repaired old, or attached new, collars and cuffs onto shirts. The 1882 directory shows Robert Ramsey, collar dresser, at 138 Petherton Rd, at the northern end of the street, so the relevance to this sign is doubtful.
By 1895 Ramsey has gone but another laundry has opened at the corner of Leconfield Road owned by William Charles Crooks, perfectly positioned to be relevant to this ghostsign. He was still trading from the same address until at least 1915 (I have no 1920s directories to hand). Around the corner, the 'London Shirt and Collar Dressing Company, laundry' is listed at 16 Green Lanes. There is a possibility that these two premises might have been part of the same company, one being a shop on the main drag and the other the actual laundry where the work was carried out.
By 1939, the laundry at the corner of Leconfield Rd has gone and another one has opened at No.128 (today=Mala) run by S&L Morris. Again, due to the distance from thr ghostsign, I don't think this is our answer.
As regards car hire, I suggest the sign is for a motor company that would have been at 116 Petherton Rd which, in the late 19th and early 20th centuries, was a bicylcle depot that later expanded to motorised vehicles. Today we can see a ghostsign for Barnes Motors at that address. In 1939, The Petherton Motor Works were at that location, though there are no laundries listed in the vicinity at that time.
Therefore I think the cars are the key to the date of the sign. Landaus were fashionable vehicles in the late 1920s/ early 1930s and this ties up with the laundry.
Any further info is most welcome.

Yesterday I happened to notice that one of my favourite ghostsigns has been lost beneath an extension to a neighbouring property.
Above Mornington Crescent station, facing north, in prime site for traffic coming down Camden High Street (before it was one-way northwards) there used to be a sign advertising a breakfast cereal. Specifically Clark's Creamed Barley.

For decades it was hidden in plain view. I recall when I spotted it in 2010 how befuddled I was that I had never noticed it before, especially as I worked in the area in the 1990s-2000s.

As you can see, two floors have been added to the next-door building, covering the CCB ad.
The building work looks to be excellent – this is a very good, sympathetic renovation. But, sigh, I do miss that ad which I believe dated from the early 1920s. Even though it's gone it will still continue to be the first stop on my Camden ghostsigns tour as it's such a fascinating product.
From ads of the 1920s: It makes a meal in a moment. No cooking. No waste. Every grain toothsome. It is the most nourishing of all cereals, and it's all-British.

A potted history:
George Clark started as a grocer but saw the potential in refining and supplying sugar to the brewing trade. By 1897 the family had moved from Westminster Broadway (near St James's Park tube station) to large premises at Millwall Docks, E14. Within two years they had built Broadway Works, a large premises in Aplpha Road complete with a large fancy entrance-way/gate. It was here they started producing caramel as a colourant for the food industry.
Specialist breakfast foods were the new 'big thing' at that time. Decades earlier, Mr Kellogg had created Cornflakes and other companies were swift to jump onto the ready-made bandwagon, offering all sorts of cereal-based one-dish fast-foods to set us up for the day.
Clarks obtained sugars from barley (not just from cane) and then turned the creamed husks into breakfast food enhanced by their caramels. Basically using two by-products to make one new product.

The advertising, like a lot of products back then, and even today, promoted it as healthy energy-maker for young and old alike or, as an ad from 1929 puts it, "from weaning to old age" explaining that those with "impaired digestion" can readily absorb its elememnts of life and energy" because it was pre-digested. Basically, the husks had been removed and it was soft, no chewing involved. another major selling point was that there was no actual cooking involved.  And CCB = Cheerful Chubby Bairns.
A prominent feature on the packaging is the Star of David within a ring of wheat, so we can assume that the Clarks were a Jewish family. If I find more information I will update this. Last year, I was delighted to find and purchase an original 1927 promo postcard on Ebay that has a nmarvellous depiction of the carton on it. It also epitomises the save your tokens, get a 'free' gift style of advertising. Clarks appear to have used this tactic often. As early as 1922 they were advertising a £5 cash prize to anyone who colllected all six parts of their logo being one of the points on the star. One wonders if this was ever actually achieved, if at all possible. In 1929 the company offered four thousand 14" wheel pedal bikes to the first subscribers who collected 100 special red seals which where hidden inside the packets. Other promotions during this era included 'free' Christmas presents (also on redemption of red seals) and, likewise, little toy delivery trucks like the one in the picture, one of which sold for £1,560 at Bonhams in 2008. One wonders if by obscuring the hand-painted sign at Mornington Crescent the product is now even more exclusive. But the price achieved was more likely the condition of the car, especially its rubber wheels, rather than the branding on it.
Other promotions included adaptations of nursery rhymes such as Old King Cole (a merry old souldwas he) calling for his CCB. An ad in 1935 called the product an "All British Health Food" and explained it as: Possessing all the food value of the finest English Barley, these crisp puffed golden grains literally melt in the mouth. They have a rich nutty flavour all their own, and are as nutritive as they are delicious. Other mid-1930s ads have instructions how to make barley water from the product, in an era when Robinson's had already secured product placement at Wimbledon.
Ads fizzle out post-WWII and the product is only referred to in editorals about rationing and food facts. However the caramel side of the business continued to prosper. George Clark & Son Ltd's Caramel Isinglass Finings ads indicate that for a time pre-WWII the company had additional premises in Bletchley and Manchester. In the 1940s and 50s they advertise themselves as 'makers of every sugar used in brewing.' The most recent ad I have found this far is this one from July 1960.
Clark's Isle of Dogs site continued until 1964 when it was taken over by Tate & Lyle. The buildings no longer exist but a nearby street, Alpha Grove, echoes the past.
The UK appears to have moved on from creamed barley breakfast-style meals, with perhaps the exception of Quaker Oats and the like. But brands similar to Clark's continue to be popular in the US and a Chicago-based company still manufactures today (see below).

If you'd like to find out more about Clarks and the company's products simply do a googlewoogle or why not join me for one of my ghostsigns tours, specifically in Camden or Kings Cross. 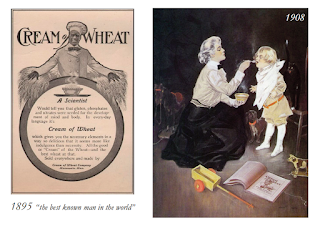