Doulton tiles and their stamps

At the north end of Black Prince Road is the old Doulton factory, covered in examples of its own creations, like a ornate street-facing brochure.
Doulton produced all kinds of fired ceramics including tiles, crockery, fireplace surrounds and chimney pots (I have an unglazed one in my garden dated xxx). They also designed and made tiles in all shapes and sizes for room interiors and entrance halls and produced the commemorative plaques in Postman's Park.
Many of London's pubs and buildings were decorated and protected mostly at street level with Doulton's distinctive tiles and many of them still remain.
Hand-firing is (and was) a time-consuming and expensive process and so these days we mass produce by machine but the end product is nowhere near as good. For example, next time you are on the Piccadilly Line compare and contrast the modern replacements, such as at Russell Square; the new ones are flat and just haven't got the depth of colour and lovely crackle glaze that the old ones had.
Doulton didn't appear to have a definitive logo stamp or company signature. As you can see from the pics below, the marks* vary a lot even within the same building. Note especially the middle row of photos which are all to be found in the portico of Lloyds, Fleet Street. I have thus far only spotted two stamps that are alike, shown bottom right, and these can be found in Covent Garden and Fulham.
Another thing to note is that even though Doulton achieved 'royal' status in 1901, none of these marks echo that fact, even though most of the tiles were affixed in decades later in the 1920s and 30s.
Still hunting for more... do let me know if you spot any. 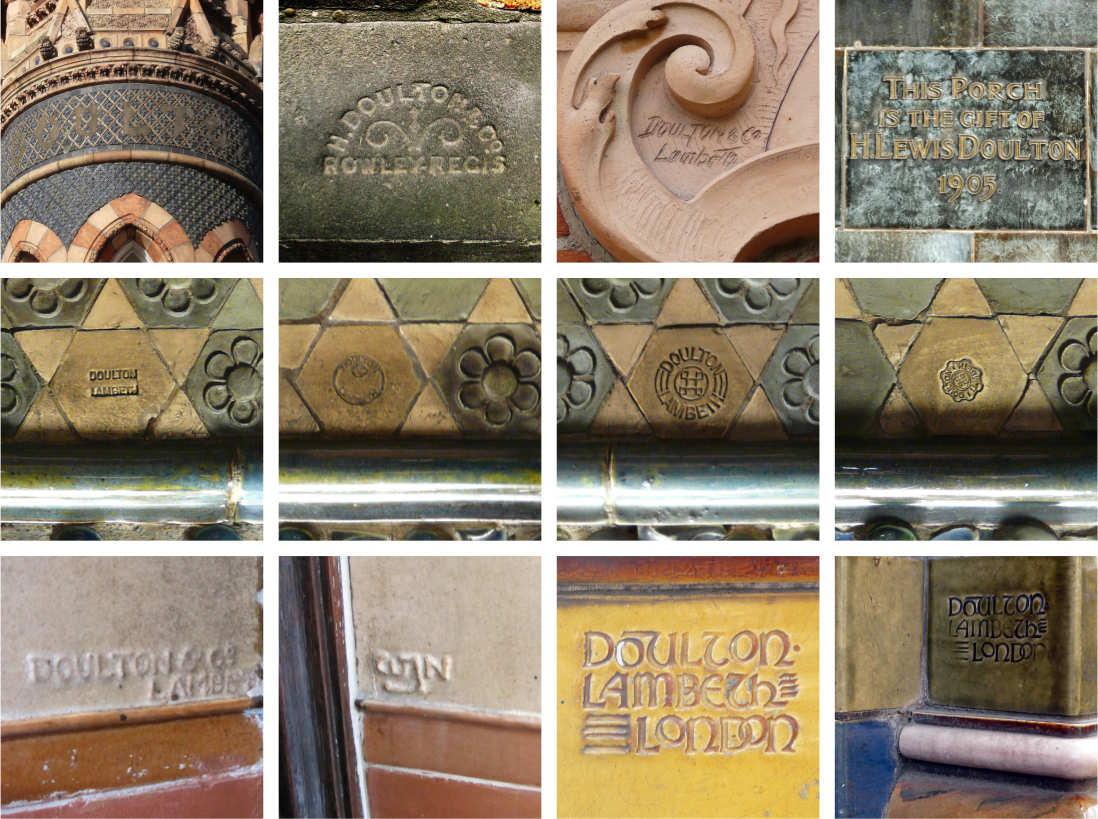 * yes, I am well aware that two of these, top left and top right, are not actually maker's marks!
3 comments:

This is the last of three posts about Lower Marsh.

It must be that if you have a can of aerosol paint in your hand you will be compelled to just spray whatever is to hand.
I say this because the pedestrian access that leads from Lower Marsh end of Leake Street into the tunnel section itself is covered completely with what looks to me like a complete random mess. I could understand if people were testing out new skills, but this just looks like some kind of free-for-all; the proverbial 'explosion in a paint factory'.
Leake Street is a dedicated space for graffiti and street art and there doesn't appear to be an inch of bare brick visible any more – even the railings and crash barriers have been 'decorated'. And, as I have reported here before, the old market barrows in Lower Marsh have been tagged too even though they are not part of Leake Street's walls or fixed furniture (grr!). 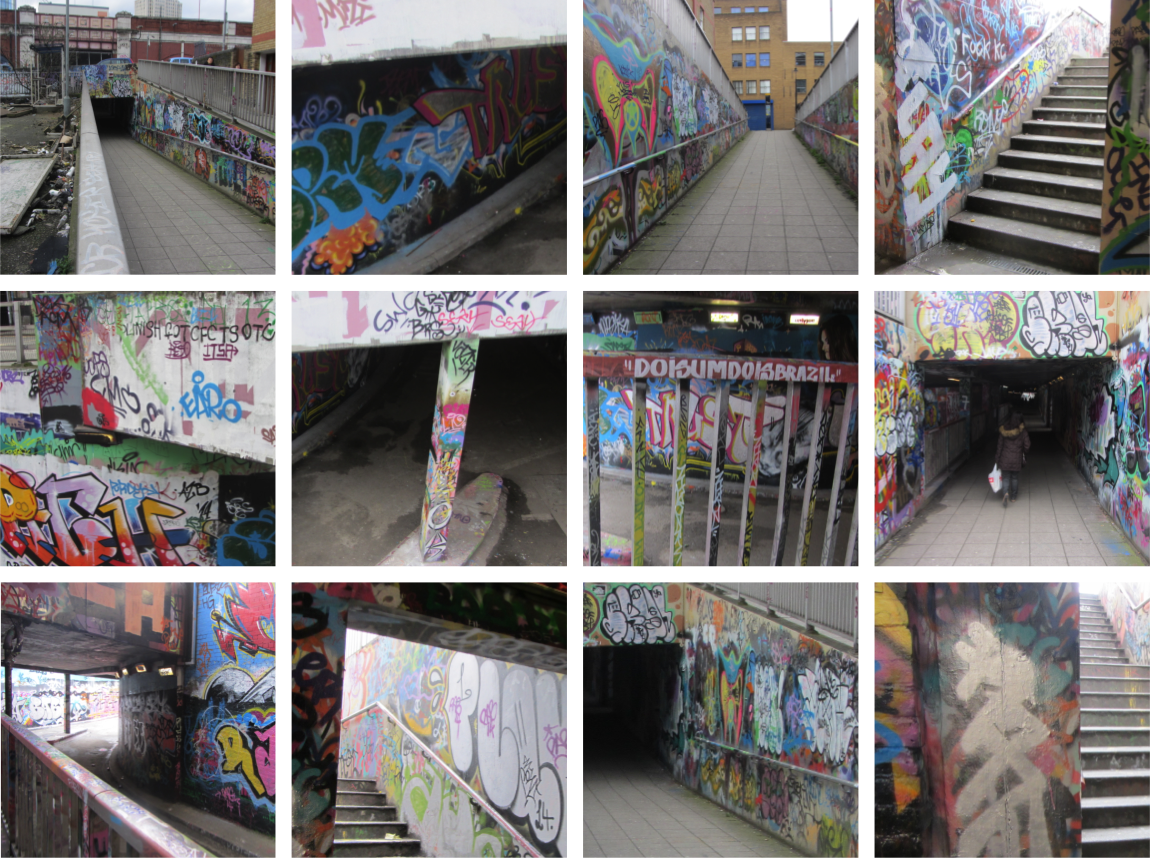 I peered down from ground level above the pedestrian tunnel and saw a group of people spraying a wall in the Station Approach section. The smell of the propellent wafting up to me made me want gag – how do people actually walk through the tunnel?!
As per Parkland Walk, the quality of the work, to my eye (and nose), isn't up to much.
Street art? Really?
2 comments:

This is the continuation of a post I wrote earlier this month about the changes to Lower Marsh, a market street situated just behind Waterloo Station.

I found a few of the old wooden market barrows near the pedestrian access to Leake Street. These once-loved and carefully maintained mobile market stalls are now sitting in amongst a lot of rubbish and hence have attracted the graffiti taggers.
On closer inspection I noticed the original barrow owners' names and addresses or market locations carved into the wooden frames. And somewhere on every one: 'On Hire'. 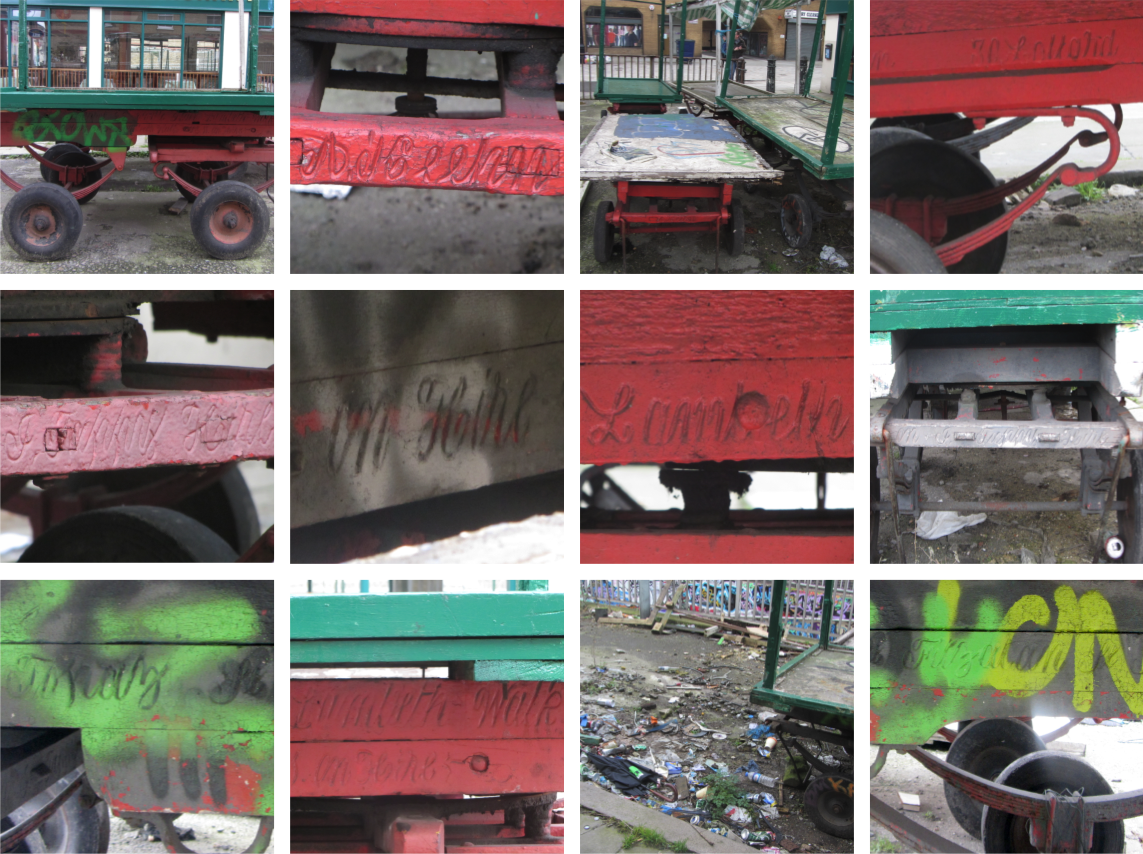 I am still trying to fully decipher some the names because the hand-carved scripts are hard to read – note the non-joined areas within the m and h of 'Lambeth'.
Of the road names, Fitzalan Street (shown bottom right) is just a short walk away from Lower Marsh, ditto Lambeth Walk which was also a bustling market street decades ago but today shows no real signs of life today. But, so far, I cannot find out anything about Topaz Street, shown second on the bottom row. Holland St, top right, is a bit further away in Southwark at Bankside.
The owners' names are even harder to decipher; possibly 'A Heehn' (second, top), A H Pelin (top right), M J Tala... (middle right). Any ideas?
And how old are these barrows? When do they date back to? If they aren't going to be used any more what's going to happen to them?

There are two really intriguing performances coming up at Sadlers Wells this month. And both are available at affordable prices; from £12.
Sadly, I am going to miss out on both of them. Please enjoy them for me.
First, there's Hofresh Schecter's 'Sun' which, judging buy this promo clip, looks to me a fantastic mix of genres and music. It's the story of liberation from the struggles of an emotive and angry world (I copied that from the press release – you could tell, I am sure!). It's on 20-23 March.
The following show, Tabac Rouge, is a different piece entirely. James Thiérrée is well-known for his inventive, dream-like spectacles and this show mixes mystery, mirrors, music and movement on a dark, ominous stage. 25-29 March.

Here are some London dancers:

After the success of the first vintage market in October 2013, The Classic Car Boot Sale returns to the Southbank this weekend.
Two days of beautiful old cars and lots of stalls selling antiques, bric-a-brac, clothes, crafts and more, plus lots of great food stalls, live music and a pub.
Hope to see you there – I will be trading on both days, selling collectibles, old tins, ceramics etc, plus a few selected items from my handmade range. Do come and say hello. 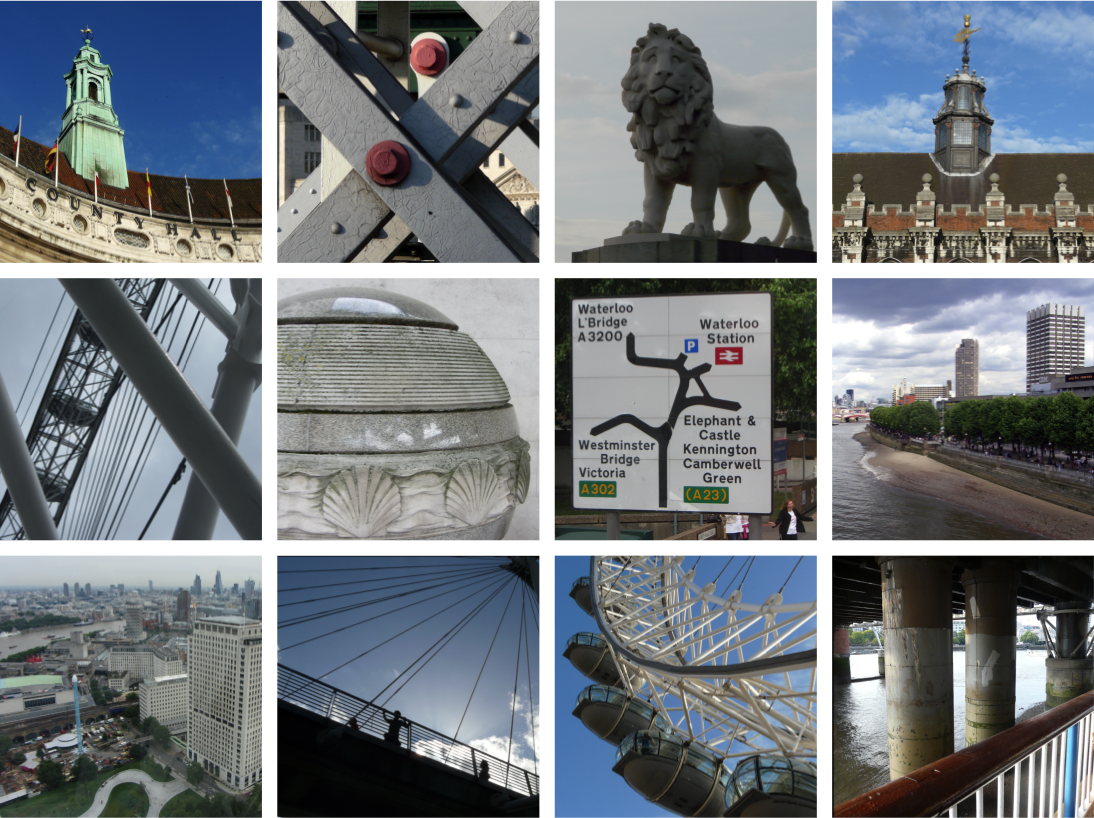 The Southbank area including a dancing junction
No comments:

Yesterday, a day with the best weather since October, I met up with a few friends for another of my Amelia Parker foreshore forages and this time we walked the strip between Battersea Village and Battersea Bridge.
It was a lovely. As these pics show. 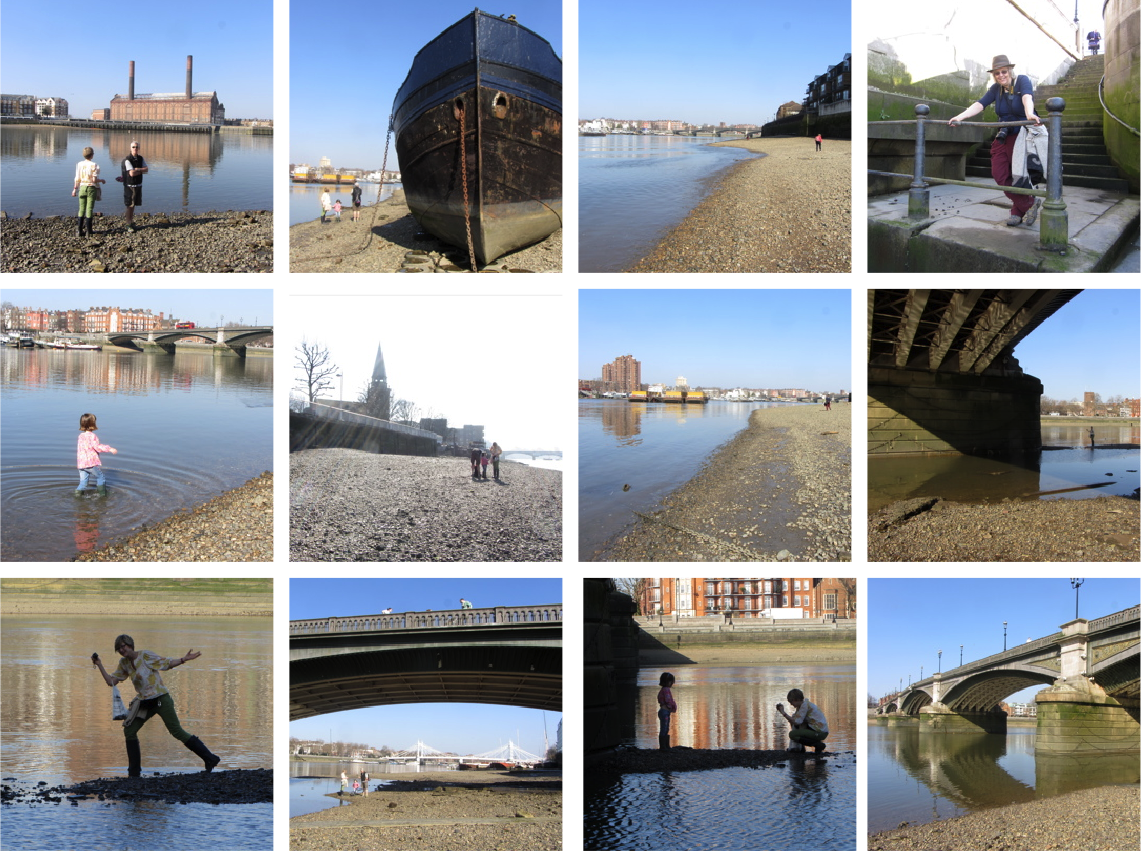 Inspired by a brick with an R on it, I also took photos of things that resembled letters of the alphabet. The M could also be an E, and the Q could be a B. Now all I need to do is create some words out of them... any ideas? 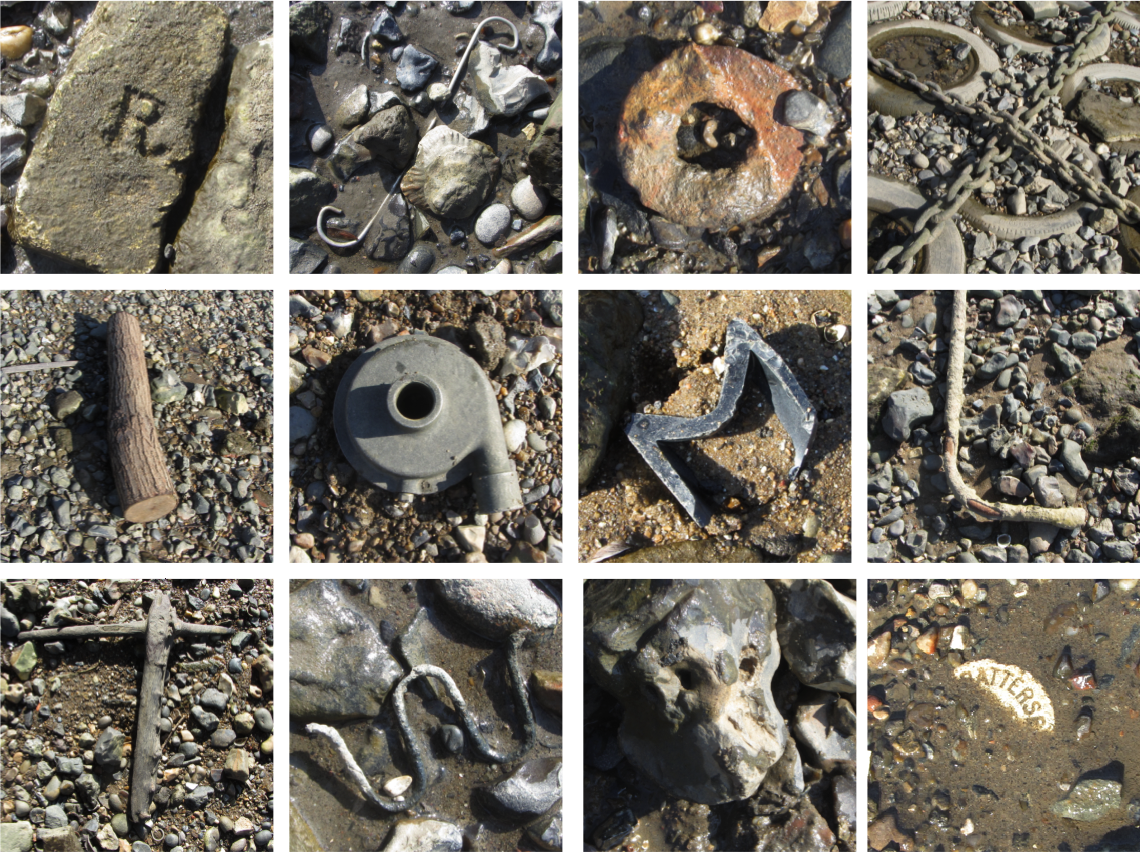 There were also a lot of stones with holes in them, many of which looked like face. Finally, bottom right, eagle-eyed Jenny spied the base of a stoneware pot sticking out of the silt with Battersea stamped into it. She took it home and cleaned it up and it turns out to be a crucible: Find out more here.
No comments:

Angels at the Royal Academy

Earlier this month I urged you to go and see 'Sensing Spaces' at The Royal Academy.
In that post I alluded to how the exhibits interact with the gallery spaces and encourage the visitor to notice and be engaged with the features and details of the rooms themselves. 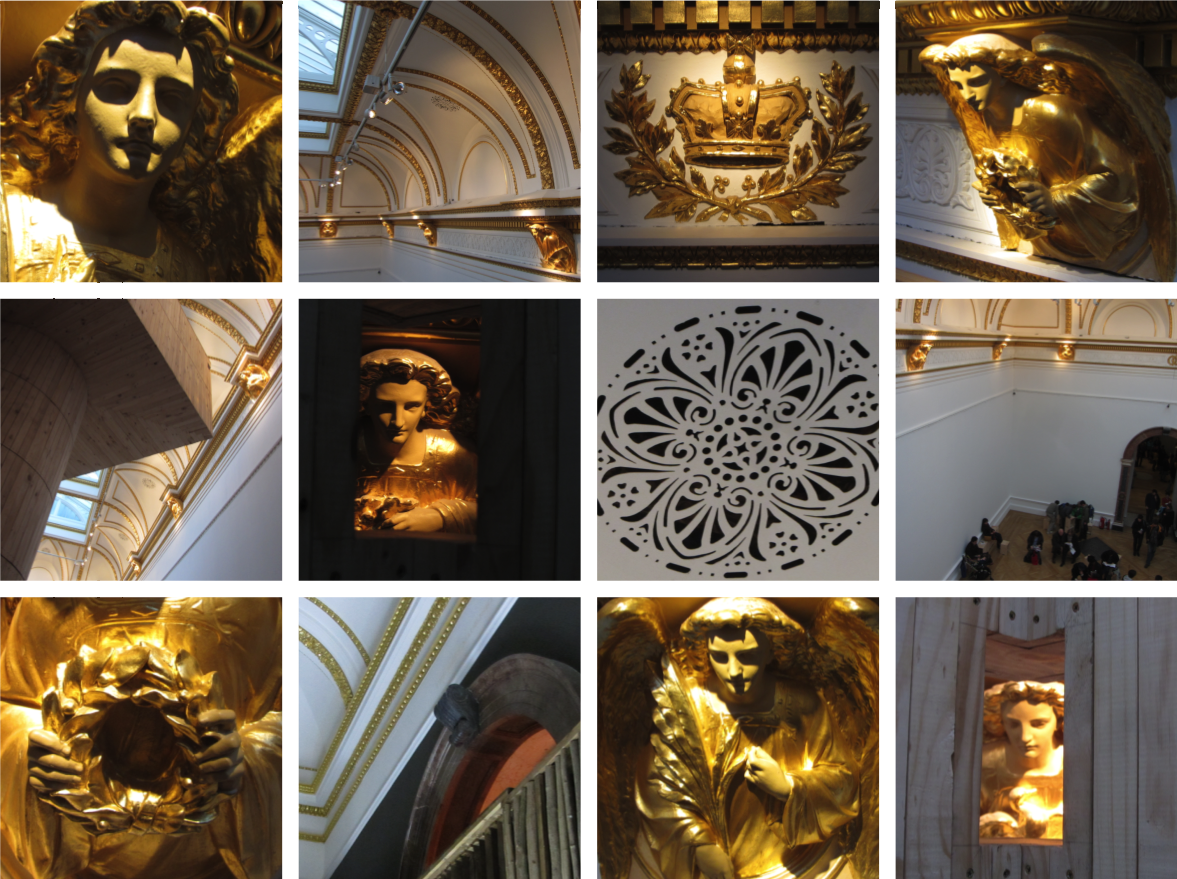 I don't think I have ever noticed the lovely gold angels and crowns before, though when visiting the Summer Show 2013 I found the metal grilles on the floor more interesting than the 'art' on the walls.
No comments:

Email ThisBlogThis!Share to TwitterShare to FacebookShare to Pinterest
Labels: art, galleries and museums, gold, looking down, looking up, reliefs 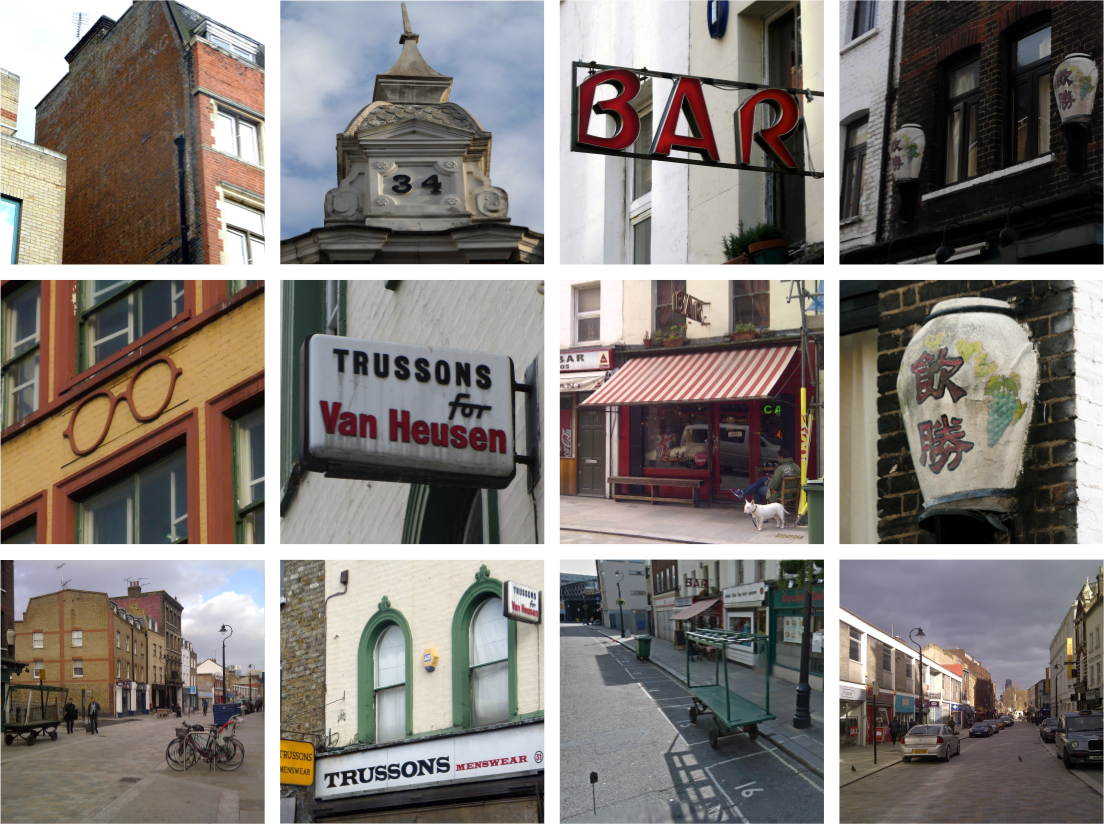 Lower Marsh is still a lovely street and it's hard to believe when you are there that you are actually so close to a big bustling train station. It's dotted with specialist shops selling gifts, vintage clothes etc, plus some great cafés that are perfect places to grab a snack before getting on your train – much better than the mass-produced gunk offered by the corporate chains in Waterloo station's concourse.
Some lovely old architectural features still remain on Lower Marsh...
There's a large faded ghost sign at the western end advertising a catering company then, as you walk east you pass the Scooter Cafe's typographically elegant bar sign on your left, followed by some old lamp oil urns on a building that has seen quite a few changes over the decades and is now a thai restaurant.
On the other (south) side is Trussons (which sounds to me like a made up name for a Carry On film!). Close to and above is a sign for a long-gone optician and further along is Lounge 34 (originally The Spanish Patriot) – note the wonky spike on the very top.
I crossed over the junction into The Cut. Back in the early 1980s I used to work with a girl from Bermondsey who would go to The Cut's market every weekend because, she told me, it was so good and you could buy anything and everything there.
Sadly there is no sign of a market there now. The street is wide and it's possible to imagine a row of traders on each side with plenty of room for vehicles to pass through between them such as in this image.
See here for more history on the area.
1 comment: