Please help to decipher this old hand-painted sign in Bride Street – could be a butcher or an ad for washing powder?

Out doing a recce for a new walk idea earlier this month  I happened upon the remnants of a hand-painted sign across 83-87 Bride Street, N7. I attempted to take a few photos with my phone but it was late in the day and the light was poor and so the resultant pics were too.
Earlier this week, I ventured out in the biting cold armed with my camera. The enhanced images below give an idea of what's there.
It looks to me to be a company called Wa(...)s(...) and S(omebody/thing) as written in undulating U+lcase script at the top. There are also remnants of three large blue serif letters, HM(?), at the middle in bold caps and, along the bottom in a fine bold italic caps, I can make out (possibly WASH...(?) and BUTCHER. But there's lots more I can't decipher.
The directories for both 1895 and 1905 do not have anything listed against these properties except Percy Tyre & Rubber Co. Ltd. shown at 83a, which I assume to be at the rear with access at the side.
So, have you got any ideas; can you help?

London Tramways – posters and artworks at the London Metropolitan Archives 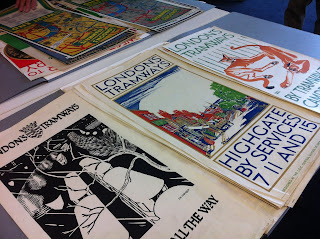 Another day, another archive, another subject.
And equally as marvellous, but for different reasons.
The London Metropolitan Archives recently held an open day event where posters and artworks from the tram age were be on display.
How could I resist?
I was there the minute the place opened. On a table in the middle there were piles of lovely printed posters from the 1920s and the 1930s. But better still were the actual artworks or designs for those posters on the side tables and these showed a bygone world of hand-lettering, retouching, cut and paste, and pencilled annotations – all devices we no longer, or very rarely, implement these days now that most things are computer generated.
All of this reminded me of when I first started working in the advertising world back in 1980. A designer would produce a colourful, hand-rendered design for the client, using Magic Markers, Pentel Pens and gouache with perhaps, a few images glued onto that. And he'd point to the client's supplied image, probably in slide format, and say "this part of this image will be here".  Clients seemed to have more imagination back then and they trusted the design agencies to produce what they required.
Once the design was approved it was then passed on to the artworker (that was me) and/or the typographer (also me) to pull together an accurate 'artwork for print'. This was a black and white rendition of the design made with the help of Rotring pens, a PMT machine, Cow Gum and Rubylith which was then sent to the reprographic department to be made ready for the printer. It was a marvellous creative process.
Today we have AppleMacs and digital cameras and various photo editing programs and everyone thinks they are an armchair designer. Apparently, we just wave a magic wand at the computer and it does all the work. I think clients think it's some kind of mind-melding process. A download of sorts. The daft thing is that it takes longer to produce something from concept to printed product than it did 50 years ago because today people are amending almost hourly. Yawn.
Anyway enough reminiscing... back to the tram posters...

I was like a pig in a colourful pit of loveliness, cooing and oohing about the artistic details of this and that and asking Simon the curator the occasional question.
It was amusing (to me), that apart from a brief visit by one other woman, the room mostly contained older men, many of whom were, I think, a little bit disappointed that there wasn't more about the actual trams and the tramlines. A lot of them looked through the posters disdainfully as if they had to do that and occasionally one would say something like, "that's the ABC1237 that used to run via Elephant and Castle but they changed the route to go past London Bridge and renumbered it in September 1931; ".
Well, I enjoyed myself and I am really glad I went there!
https://www.cityoflondon.gov.uk/things-to-do/london-metropolitan-archives/Pages/default.aspx is a major resource for historical information for anyone doing any research be it family history, old maps and photos etc. They also have an online search facility and a marvellous photo library.
It looks like I will need to use the archive to find out more about Siffken & Co.

Tram access covers feature in one of my posts from last year.

A visit to the Parliamentary Archives

Last week I was lucky enough to be able go on one of the last tours* of The Parliamentary Archives within the Palace of Westminster.
Accessing the building involves a security bag check which is just like at an airport including a bit of frisking if you are lucky. Sadly I missed out on that pleasure having worn a bra that didn't set the machine off.
The tour group went in small batches up to the research floor because the lift can only take a max of six people. We then navigated some small utilitarian passages which really don't look like they ought to be part of a tour to reach another equally tiny lift. But it was ages arriving so our sub-group agreed to walk up the spiral staircase.

I am pretty sure most of the others also hadn't heard that it was an 8-floor climb! Oof! Though stopping to take photos helped!
We finally reached a room near the top of Victoria Tower. When the tower was constructed it was the tallest secular building in the world and the 'show and tell' room affords some marvellous views through the leaded glass windows and the tracery to the north and west of London.

On the table there was a marvellous selection of well-presented historic documents and large heavy tomes. These included notes from Lloyd George, directories of noble families and petitions showing wonderful signatures or symbols indicating how some people could not at that time write.

And then back out to the spiral stairs to look down through the well. This is the view we sometimes see on TV when the Queen arrives here:
And then to the the famous archive room with all the document rolls – I practically hyper-ventillated with excitement as I entered the room. Wow!
Each roll is date tagged by sovereign age (that's what all those little pink, yellow and green squares are in the pics below) and some of them are HUGE. I mean long. Very long. One is half a mile long! I wonder how much it weighs? 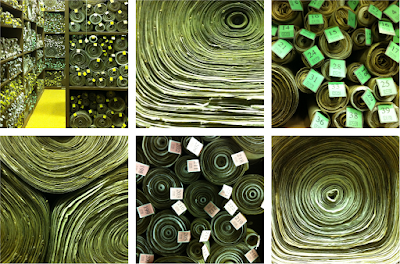 A few special documents and books were chosen to show us, and these included some famous historical names:

What a delightful way to spend a couple of hours.

*The archive is a valuable resource for anyone delving into the past. The physical archive (the books and scrolls etc) will be moving soon whilst the facility is overhauled, however the database and research facilities will still be available – I think I've got that right – click here to find out more.
No comments:

My walking tours in North London are friendly and inclusive gatherings of like-minded souls keen to learn more about this history-rich area.
I offer a range of walks – some cover a range of highlights in a specific area or along a certain road; others are themed, such as the heyday of the Nags Head area when Mr Pooter "lived" here, Art Deco Arsenal and Holloway, drinking establishments along the A1, ghostsigns and green things.
Most tours are 90 minutes long.
More info here. Tickets for scheduled walks are available through Eventbrite.

Bygone Brands and Businesses – a compact Jane's London in 90 minutes

As you know by the strapline under the header on this site shows that I am all about little historical details still visible on today's streets.
One of my guided walks, shown right, brings together all of these things and, as such, is a kind of potted version of this site. The walk covers old signage, ironmongery, hand-painted advertising on walls, carved reliefs, pubs, shops, name changes, logos and branding in the Upper Holloway, N19, area.
I also have a couple of other walks that are about ghostly signs of the past in Lower Holloway and around the southern half of Upper Street and these are mostly about the hand-painted ads on walls type known as ghostsigns.

Lots more ghostsigns here.
If you'd like to join me on a walk sometime, all info is here on Jane's London Walks or for the detailed descriptions of the individual walks and how to book go directly to Eventbrite.

Oh the weater outside is frightful...

...but inside it's so delightful.
I love that song.
But I don't want to let it snow let it snow let it snow because this weather is stopping people from bookings my walking tours. Me me me!
Yes, poor me – I have had to cancel the four walks that were scheduled for this weekend because it's so damn slippery out there and I'm today organising refunds or exchanges for other walks.

So while I've no place to go I bring you a collection of twelve White locations or white things in London – can you identify where they photos were taken?