The view from the London Eye

As mentioned a few weeks ago, I recently went on the London Eye.
For me, July was a month of elevated viewing experiences as I had already been up the BT Tower and The Shard. They say [good] things always happen in threes!
On the day I went on the London Eye the weather was not too good; it was the first rainy day of the July heatwave and I missed out on the blue skies and clear horizons. But never mind, I can't complain when the ride was free, thanks to those lovely promo people from the Southbank.
I could still see for miles but, seeing as it was rather grey in the distance, I concentrated on looking down on the buildings and bridges that were closer; the Treasury and the Houses of Westminster, the roofs of Waterloo Station and the internal buildings of County Hall. And there were still lots of people outside Queenie's House because Kate had sprogged the day before. 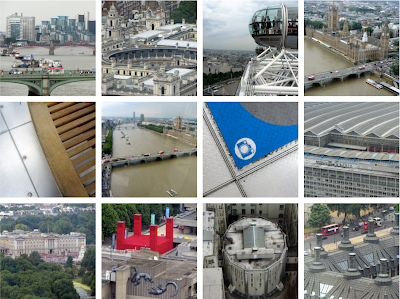 So what high buildings are next? Tower 42? Millbank Tower? That thing at the Olympic Park?
Watch this space...

Incidentally, I just put "London Eye" into my photostream's search engine on Flickr and found some pics of a different kind of London Cityscape from Eat London 2006.