On 10th March 2017 a small version of B&Q opened up in Holloway Road within the old Post Office building. I was immediately concerned about the local independent hardware and DIY shops in the vicinity, especially one a few hundred yards up the road that has always been my go-to place for fixings, screws, glue, tools and other useful stuff, plus friendly advice too.
Local shops like this have a wider range of products, and are not pushing their in-house labels which, let's face it, are mostly copied from ideas created by other independent innovators.
Well, look, it's happened. They're closing down: 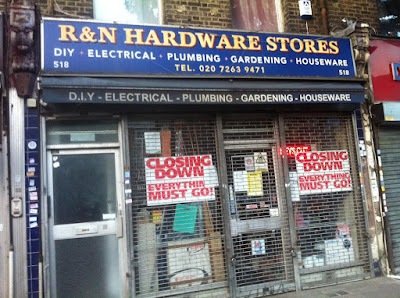 To those of you who have been shopping in B&Q rather than supporting this local independent shop – shame on you – you did this!!!!!

Soon all high streets will all be almost identical with the same shops in a different configuration.
And don't get me started on the lazy people who live in this area and are surrounded by a diverse range of shopping opportunities less than ten mins' walk away, yet they order online and have their shopping delivered by gas guzzling noisy vehicles to their homes, thus killing the very environment they chose to live in.
GRRRRR!

Update:
I was called by the local press about this. Read the piece here.
1 comment:

Façadism – keeping an original street-facing part of a building but removing and replacing everything behind it and then adding a new building behind it.
Recently people have been up in arms about this citing examples such as the Mallet, Porter & Dowd building in Caledonian Rd and the rear of the hospital building in Artillery Row as examples of how bad this is. The Gentle Author/SpitalfieldsLife is one such person who is getting rather angsty about it and uses words like outrage, plague, folly – he is currently asking people to help him crowd fund a book on the subject.
Well, like Michael Winner, I say, calm down dear! Put you handbags down! What are you upset about exactly? Can we please put this into perspective...
Is the stress caused by loss of the old building? Or the building of the new one? Would the 'Façamoaners' rather the whole thing had been demolished? Does keeping only the front-facing section make them sad, like recalling a dead relative?
Yes, I am also disappointed at the amount of glass that is quickly replacing the old buildings, especially in the Square Mile during the last 15 years, but I am aware that 'progress' means moving with the times. Deals are not made in coffee houses these days.
Are the Façamoaners suggesting that we keep everything that has ever been built? We can't save everything! What do they think was there before? Consider that the coffee houses replaced Tudor buildings which were built on Roman dwellings etc – should we build on levels until we reach the sky?
Regarding the two examples I give at the top of this post, in my humble pragmatic opinion, having studied both of those sites I have come to the conclusion that they have been well-considered, and keeping an attractive part of an old building helps a passer-by who is not that up on local history to question an area's heritage. Surely that's not a bad thing?
The MP&D/Costa CallyRd site (pic right) is often criticised because the old and new windows do not align. I agree that it does look odd at first glance. But, look closer to see that the old and new front walls are approx one metre apart – to align the windows would minimise light into the building, especially on an east-facing site. This design allows light to enter the building from many angles. The façade was the most interesting and attractive part of the building – as a warehouse only the front of would have had any embellishment. It's amazing that it's been retained at all. Again, would the façamoaners prefer to have this part also removed and we just see a flat wall of glass and clip-together panels, as per the rest of the terrace going south (left in the pic)? The new glass building will not last as long as the 1874 brickwork – there will be further developments here I am sure. My own problem with the renovation is the loss of the 99% of an original doorway of which only a tiny triangle remains at the extreme left.
A lot Holloway, N7, was built in the 1870s including the residential streets where I live. Façadism is in action here too but it's not so obvious; not so clearly defined. I reckon that less than 10% of the houses here will have interiors that resemble original 1870s floor plans. As I write this three houses a stone's throw away are being gutted and extended backwards and upwards – I expect bi-fold doors and pedestal kitchen units to arrive in the next few weeks.
In the case of Niclar House on Shoreditch High Street a bit of façadism would have been welcome.
Food for though eh.
That'll do.
Thanks for reading this.
No comments:

An attempt at cleaning

You are probably aware of the ongoing renovations in front of and around Highbury & Islington Station and the re-routing of the traffic around the roundabout (grunt).
The forecourt in front of the station was, so I was told, laid with the incorrect paving slabs and then re-done in nice textured [sandstone?].
But take a look at how it's being maintained. All that happens is a man in one of those mobile sweeping trucks makes a squiggly journey over the slabs and leaving a swirly dirty mess behind and the corners and edges are left untouched. 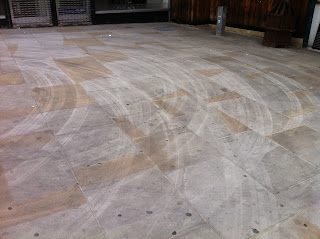 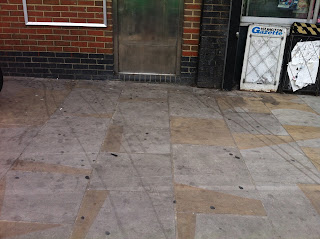 The Angel Canal Festival takes place every year on the first Sunday of September around City Road Basin, Regents Canal, Islington (11am to 5pm). The event is always vibrant with plenty to see and do.
If you have ever wondered about the history of the canal then this year you are in for a treat because this year there will be a floating exhibition on the Dutch barge Fiodra which will be moored along the towpath of the canal at the end of City Road Lock. On board there will be 'now and then' photos, stories and memories about working and living by the canal, old maps and plenty of info about the industries which once thrived here. A free booklet will be available from the stall alongside the barge.
The project is spear-headed the Young Actors Theatre of Islington (YATI) along with Regent’s Canal Heritage Project and supported by the London Canal Museum. It forms part of the 2020 celebrations for the 200th anniversary of the completion of the canal.
Jamie Lynch of YATI says “We are so grateful to the National Lottery Heritage Fund for supporting us. We have brought local elders to share their stories of Islington’s past with some of its newest residents and collected lots of memories and photos over the few months. We have all learnt such a lot and we're delighted to share these at the exhibition and in the booklet".
In summer 2020, the exhibition will transfer to Islington Museum, St John Street.

Guided walks – On the following weekend, on Sunday 8th September, the exhibition will be brought to life through two 2-hr free guided walks: ‘Regent’s Canal Two Hundred Years On’. The tours, led by the two JPs*, will start from City Road Basin at 11am and 2pm. Spaces are strictly limited. The specific meet-up point will be on your ticket. More info and booking here.

*Jane Parker (me!) and Jen Pedler, my fellow Islington guide.
I already offer two guided walks along and around this stretch of the Regent's Canal– Waterways Wharves and Windmills and (about the varied industries pre-1960s) and Boxes, Babies, Beans and Bras (a ghostsigns trail – signage for many of these old businesses is still visible) – see here for more.
No comments: