At the pedestrian crossing that links Islington Central Library and St Mary Magdalene church on Holloway Road there are road markings. Or should that be ROADMARKINGS:

Across Islington, though I have seen it elsewhere too in the UK, there are metal signs created using single letters mostly arranged in an arch or spaced across a gate.
I would guesstimate that 10% of these signs have one or more of the letters within them flipped back to front.
Here are four prime examples:

As you can see, the confusion usually lies with the letters A, M, U, V, W and Y.
In my mind's eye I can see the person who was making this sitting there with a puzzled expression, holding up the letter, looking at it one way and then the other, rotating it, it flipping it, shrugging their shoulders and then... oops!
Most of these signs appear to use a similar serif font which means all the craftsman (if that's not too specific a word here) needs to do is consult that alphabet, or a similar cut, to double check before he/she starts welding.
Ah... but check out the image top right for Mayward House, Pentonville Rd – one maker just wasn't sure which way round to put the A on Mayward so gave us both options. Hey, I suppose it balances the flipped M and the flipped U in HOUSE (not shown). Note also the spectacular letter-spacing across MAYWARD – all-in-all this is a truly sublime example of this kind.
I also have some evidence of school gates with flipped letters. Yes, schools. I will dig those out and post them anothe rday.

In addition to flipped letters I have also spotted an error in a huge sign that runs across City and Islington College at the top end of Goswell Road near the Angel Islington road junction. As you can see the S is upsidedown – it's been rotated. Go check you Gill aphabet people the bowl at the top should be smaller than the bowl at the bottom. Stands to reason really. Otherwise, like here it becomes top heavy. 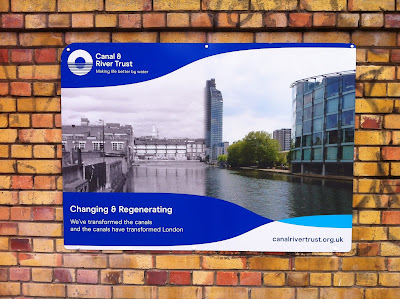 This sign is opposite the end of City Road Basin and it bugs me every time I look at it because photographic devices like this are usually employed to highlight the change over time in one particular place.
However, here, the black and white left half is a historic view looking from City Rd across the basin north to St Mary's Islington, and the contemporary right hand side shows us the view from the towpath looking south.
Changing and regenerating?
More like misleading and confusing.
No comments:

Last month I put together a collection of coal hole cover plates that I'd snapped in Primrose Hill. I mentioned that one name was the most common here. I didn't actually compile a chart or count every plate I saw that day but I think I saw more for George Beach & Company of Camden Town than any other company.
Every area tells me the story about its local supplier. Sometimes a property developer will use a trusted supplier for his whole terrace (as per the line of Charles plates in my previous post) or they engage a local ironmonger. If plates need to be replaced at a later date then homeowners will have more than likely used they nearest local tradesman. And here that go-to supplier appears to have been Mr Beach.
Below are five different cover plates from this area and you can see how Beach's name and the designs have changed over time.

I have attempted to put them onto chronological order (reading top row L-R and then bottom row).
Logic tells me that the one shown top left is the earliest – it has just the name and looks to be an adaptation of a simple design that seems to have been widely available as a sort of template/mould.
Then the second pic shows the name shows Geo as an abbreviation for George and the address at 167 High Street, Camden Town. This was next-door-but-one to The Black Cap public house. I can't actually date tit specifically but I would guess it's approx 1880s as by 1895 Geo Beach & Co Ltd is listed in the directories as being at 167-169 with a shoe shop also at No.169 intimating that Beach had also acquired premises at the rear.
The pics top right and bottom left are, I think, the same design, but one has lost its centre section. George is now using a pretty eight-pointed star motif which, again, is a common/standard design as it includes the words Patent Plate at the centre. Note also that the specific company address has been dropped from here onwards. And he's reverted to just the initial G for his first name.
Centre bottom has a less fussy star design but it shows that it is now a limited company as confirmed by my 1915 directory which also has the company listed as wholesale ironmongers at 63 Seymour Street. This is an up-market move as it's on a corner of the southern end Edgware* Road, a stone's throw from Marble Arch. Perhaps next time I am wandering in that area I might find some Beach cover plates showing that location.
The last pic is the most recent as it shows the addition of N.W.1. which is the area code for Camden. This numbering system was introduced in 1917.  Beach looks to have adapted the previous design here – a ring of dots replaces the word patent plate at the centre and eight ventilation holes have been added to allow for air to circulate in the coal bunker below. 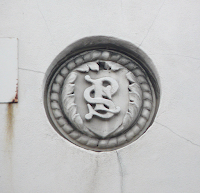 Today 167-169 Camden High Street is home to the local branch of Carphone Warehouse. If you look up at the top edge of the building you will see a circular motif containing a shield with the cartouche PS or SP. I am still trying to find out who or what these initials signify. I am guessing this is the first owner of the building.

As ever, all contributions welcome via the comments section here or just email me: jane@janeslondon.com

*sometimes written as Edgeware
No comments:

Last week I was really glad to find that my local M&S in Holloway is still open and trading despite reports last year saying it would close in Jan 2019. I wrote about that here.
As I used the checkout I chatted to the lady on the till and she told me this branch will still be open until at least May 2019. I understand that they can't close this one until the new premises is completed up at Archway.
I'm told that a branch of Lidl or Aldi is coming to this Holloway site – I am not sure if they plan to take the whole L-shape footprint but whatever happens, I hope they keep and maintain the marvellous 1930's frontage.
2 comments: