From a No29 bus last month I snapped a few pics of the abandoned Temperance Hospital in Hampstead Road, NW1:

This group of once-proud and important buildings has been empty for deacdes. I am pretty sure the hospital was only partly being used when I worked around the corner in Stephenson Way back in 1996, so that's almost 30 years of neglect. What a sad waste of space.
I was half-heartedly thinking about making an effort to do some research and, lo and behold, I discover that Caroline has conveniently done some sleuthing about the hospital for me. Read it here.


The old St Pancras Female Orphanage, the southernmost of the hospital buildings has, in the last few years, been spruced up – and the ghosted lettering above the entrance has been repaired and replaced:

The other buildings await the fate of HS2 – see here for more info about the proposals, specifically the section sub-headed Euston.

The coal holes of Warwick Square

I was wandering about between Victoria and Pimlico hunting for a bench on which to sit and eat my take-away sandwich and had rather hoped that the garden in the centre of Warwick Square might be accessible. But no. So I stood to eat and pondered how sad it was that none of the key-holders were within the railings enjoying the lovely flowers and benches. Sigh.

I crumpled up the packaging and, whilst searching for a litter bin, I noticed how almost all of the coal holes that serviced this impressive terrace of 1840s town houses along the long south-west side of the square, were still intact. This is rather at odds with the facing side of the square where there are only about three left.
Many of the cover plates were the same design depicting the same companies, such as the the ubiquitous Hayward Brothers and a few Luxfers. But I was quite impressed at the diversity of designs in such a short stretch and noticed quite a few names and makers that I hadn't seen before plus a couple with name I already know that makes me chuckle.

An old faded hand-painted HOVIS advertisement sits above The Old Dairy public house at the end of Hanley Road in Stroud Green.

The picture on the left shows that there had been two versions of this sign painted one over the other; note how some words and phrases look to be repeated. However, this is just a fading over time such that the older sign starts to visibly seep through the newer one.
The decipherable elements were:
J T TURNER
BAKER & CONFECTIONER
SHOPS & SCHOOLS SUPPLIED
HOVIS
BREAD
(overprinted with)
SUPPLIED TO HM THE KING

At the end of last year I noticed with sadness that some idiots had graffitied a wobbly indecipherable tag (defily?) over the bottom half. On closer inspection I realised that the sign had for some unknown reason been previously scrubbed clean.
Well, here is an update: it's now free of graffiti but has been scrubbed even cleaner to remove the spray paint and, as you can see, we have now lost the word HOVIS altogether and the bottom section is a pale greeny-grey splurgy mess.


The brand name HOVIS came from the winning entry in an 1890 competion to name the then new bread. Herbert Grime won £25 by shortening the Latin "HOMINUS VIS" which means “the strength of man”.

Last week I was wandering down towards Waterloo Place from Piccadilly and noticed that the area that once was St James's Market is surrounded by hoardings and in the process of being renovated.

So I looked up The Crowne Estate's site hoping to find that a street market might be included in the plans. Nope.
However, this pdf (from the Useful Docs section) includes some interesting information about the plans plus some history of the site.
For your delectation I am here including the lovely pics and historical info that can be found on page 7. 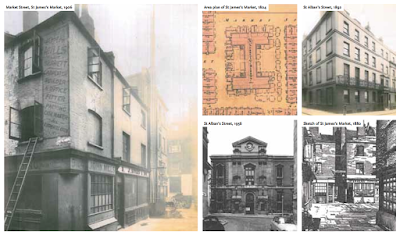 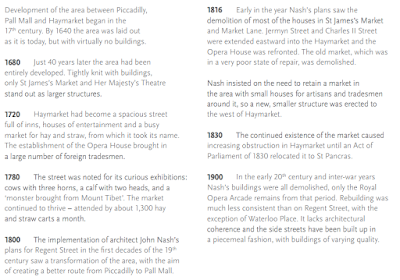 Every now and then some ill-advised or mis-guided muppet with a vague idea that he/she is preserving history sets to with brush and paint and has a half-arsed attempt at touching up an old ghostsign; a ghost of the past.


This sign in Junction Road, N19, has also been attacked, sorry... renovated.

The original wording for Auction Rooms & Depository sat within or on top of an old panel (see the top right corner where it doesn't quite fit). Another [later?] sign that ended with 'furniture' can be seen at the very bottom. Note how all the chunky black letters were outlined with white and had a 3D-effect drop shadow which, I think, being as it has faded faster, was probably in another colour.
Now compare that with the revised version which has all the words rendered in the same flat grey with no attempt at 3D, and the area in the middle has been scrubbed clean/ painted flat, thus losing any hint of what the rest of the lettering might have said. 'Furniture' on its own means nothing. What exactly has been achieved here?

Advertising spaces have always been updated and repainted as new signs for new products or businesses have been over-painted onto them over the decades. And this is still happening today. For example, in Upper Street Islington, an old sign for the Hare and Hounds Garage was scrubbed back and overlaid with a modern pastiche to advertise the bar and restaurant below. I was initially sad to lose the old sign, but realised that it made sense for the new owners to utilise the advertising space. It has subsequently been altered again by the latest owners.
But, back to my main point; I just do not understand what is achieved by just tarting up and repainting an old sign when the business or product is no longer relevant. Leave it alone. Let it fade. Don't touch!
I'd rather see the whole wall painted over with block colour rather than this kind of considered damage.

I'll stop now. I don't like criticising. I wish I didn't feel the need to. But sometimes it needs to be said.

Thanks for reading. See you soon.

The Walthamstow Fragment – an Ionic Conundrum

Outside Vestry House Museum in Walthamstow Village there sits a short column with an Ionic capital.
Its irregular shape kept me intrigued for quite some time because I noticed that no two corners are the same – one corner is a true right angle, the next an acute angle, the opposite one has a corner cut into it and the last is an obtruse angle. Oh, and for some reason the one true corner is angled at the very top edge.
And, rather than all four side faces being the same, giving the illusion of a scroll falling on a column when viewed from any angle, this one depicts a scroll cut and flipped through the diagonal, such that faces A and B are alike with the usual egg and dart design, but faces B and C have some central foliage.
It's rather hard to explain so here are some photos:

It's an architectural conundrum; a stone mason's nightmare.
Intrigued, and thinking it was an art installation, I looked for an information plaque, but could not find one.
Having just researched it online, all I can find is that it is a relic of a GPO building demolished in 1912. But it doesn't say which GPO building or where exactly it stood.

I wrote the above and hit 'save' rather than 'publish' and went to check out porticos with ionic columns. And I now see that it's all very simple...
This Walthamstow fragment must have been the left corner of a portico. For example, see St Pancras Church opposite Euston Station – for the corner columns of the adjacent outward-facing sides to both depict a scroll they must have a common protruding angled corner piece, and the opposite internal corner needs a chunk 'missing' so that it aligns with the flat scrolls on the interior sides of the other columns (are you following this at the back?!).
Blimey, that was hard work, but I do now feel enlightened.
As for the irregular obtruse and acute angles I noticed on the Walthamstow fragment, I am now wondering if I didn't see that at all; the mind/eye can often play funny tricks... Or maybe, if I observed it correctly, the GPO building was, indeed, a bit out of true or built on a strangely-shaped plot of land.
A return visit is needed, or if anyone lives nearby, perhaps they could go and have a look for me and report back.
2 comments:

Accentuate the positive – three rather nice places to get off the No.19 bus 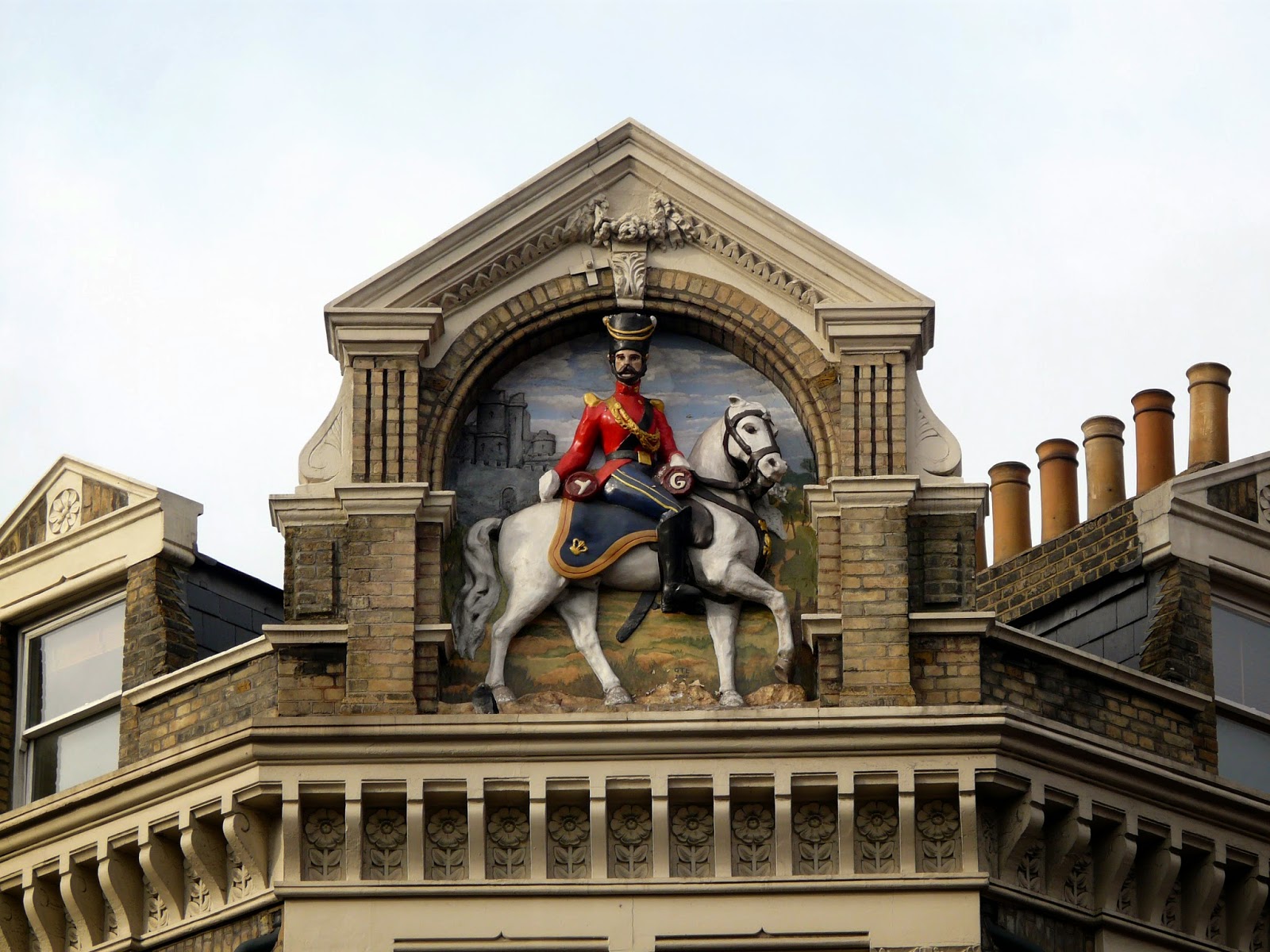 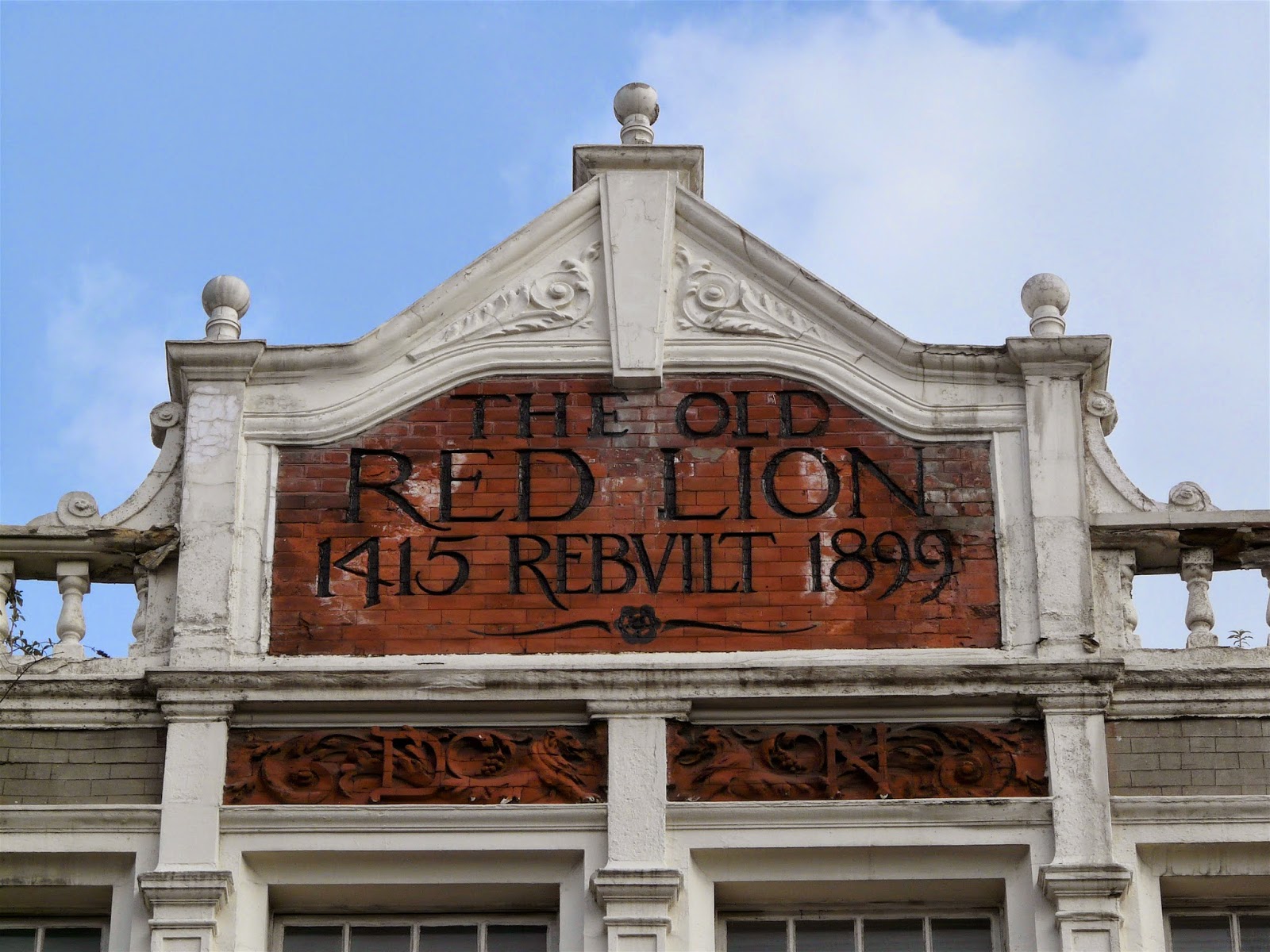 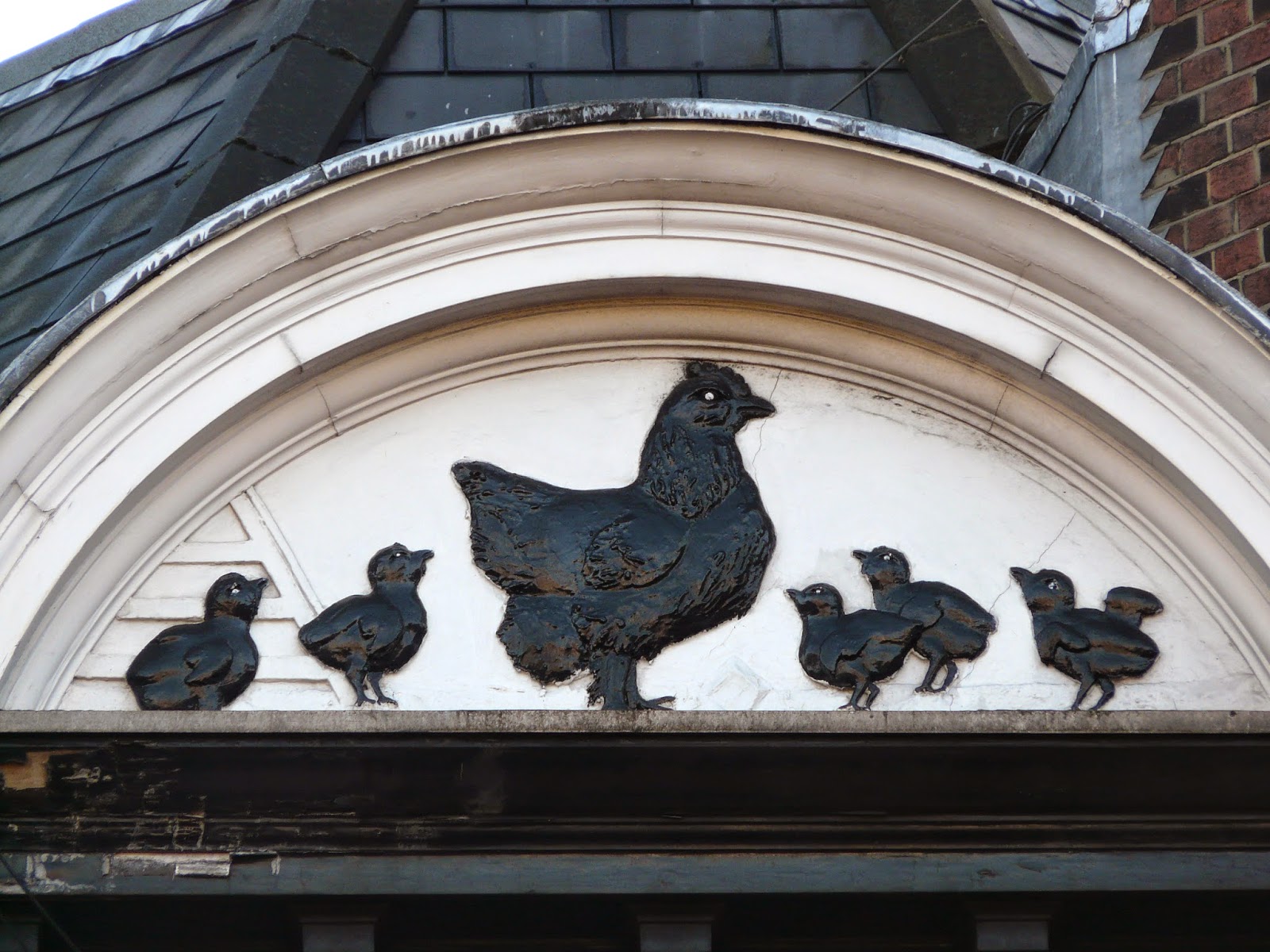 Holloway Hullabaloo and The Big Day out in Whittington Park

My local arts festival is now in full swing.

On Sunday, 7th June, there will be a vibrant street party called The Holloway Hullabaloo (try saying that when you're drunk!) in Hornsey Street (at the side of Holloway Road tube station) and I will have a table there selling some of my photographs as prints and greeting cards, plus a small range of my clay pipe jewellery, accessories and cards.
I will also be at The Big Day Out in Whittington Park, near Upper Holloway train station (map), on Saturday 13th June where there will be stalls, entertainment, a dog show and much more.
Hope you can come along.
Here are some pics from last year: 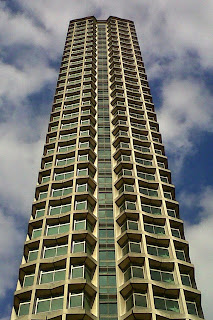 I have always liked Centrepoint. In comparison to all the plain sheets of glass to be found everywhere else (or Renzo Piano's hideous hi-rise Toytown just around the corner), this tall tower is distinctive and, therefore a true icon of its age (just like me cos we were both born in the early 1960s!).
The 33-floor tower was a controversial topic from the day it was built. At 385 ft high it was tallest building for miles. For many decades it stood mostly empty.
The fountains stopped gushing in about the 90's, I think, and their mosaic'd pool sat empty and unloved until Crossrail came in and bulldozed the area around the tower, along with a lot of other much-missed buildings (in particular The Astoria boo hoo), to make way for a new modern Tottenham Court station and piazza. For this we can assume bland and flat with and square corners  – faster to build, see. 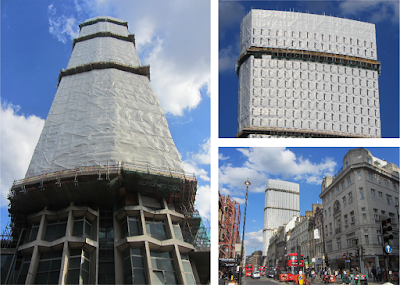 At I write this Centrepoint is being converted into 'luxury' apartments costing approx £3million a pop. It is clothed in a kind of trompe l'oeil rain mac.
This all seems a bit at odds with this other Centrepoint.
No comments: