I am saddened that The Water Poet, that marvellous drinking establishment in Folgate Street, Spitalfields, is due to close.  The immediate area is to be redeveloped, no doubt with more glassified blandification and Dubaiification.
They say here that the pub will be opening up again nearby with the same name.
But it won't be the same pub will it?
You have until March 29th to pay your last regards – I will be in there this evening enjoying a pint or two with friends, probably in the garden if I can find a space... so do come and join me.
I am not sure what is actually planned for this corner site once the pub closes. But check out what happened at The Gun on the opposite side of the market – The Gun was built in the late 1920s on a corner of on Brushfield Street but was closed when the Fruit & Wool Exchange was demolished all bar the façade. A new pub has since opened up on the same site and I can't be the only one to be aghast to see that it has been given the same name yet bears no resemblance at all to the old one. If I was the previous landlord or one of his regulars I would be disgusted and insulted by because it is now nothing like the proper old boozer it used to be – it now resembles a horrid chain hotel/cocktail bar. Hmmm.
Check out also The Three Crowns just north of Old Street roundabout which a few years back was given a wash and brush up that holds the building there like some kind of historical little gem within a huge block of modern glass and metal. The pub has been 'renovated' involving the removal and/or replacement of anything that made it worth saving in the first instance. And they have painted the tiles!  Yes; painted!  if you paint tiles you then have to paint them again years later when the paint peels off. Tiles can be wiped clean.  Muppets.
Oh what do I know?!
No comments:

Free apostrophes with covers and cases at Mr Panini's

How do people end up making the wrong decisions about apostrophes? For which they'd write apostrophe's.

It's as if they pick up a few just in case and then see six words that end in a single letter s so they just chuck the little hooky things at the words and hope they attach themselves in the right places.
It reminds me that close to my home there is a Post Office with a cafe attached. Painted onto the window they have listed what's on offer; sandwiches, rolls and the like. But we locals call it Mr Panini's because that's what it says on the window.

For those of you who don't know, panini is already a plural word in Italian so adding an apostrophe and a letter s must in this case indicate possession, hence this must be Mr Panini's cafe.
So where was I?
Ah yes, a shop at the bend of Pancras Rd offering radiator covers and book cases with free apostrophes shown in the top two pics. But if you want a radiator cabinet you will have to go without.
Just to the left/south of this shop (Feb2019) there is a temporary toilet cubicle where you can also get an apostrophe fix.
For those of you who still haven't a clue where an apostrophe is needed, it is /it's* reasonably simple – stick one in where a letter or letters is/are missing or where someone owns the item to show possession. Plurals, as in the pics shown here, do not need them. More clarification here.
*not to be confused with the possessive its which has no apostrophe as in "the cat licked its lips"

The Duchess of Kent

The pics below show an old Charringtons pub today standing empty on the corner of Carnegie Street and Charlotte Terrace between Barnard Park and Regent's Canal in Islington. Note the 1930s Georgian-esque architecture and their red Courage Best cockerel on the front. 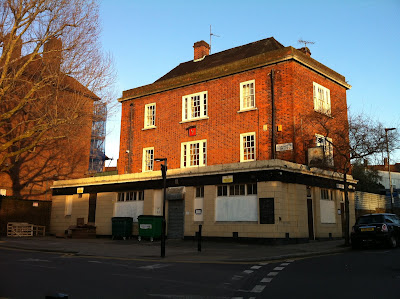 Pubs of this type, faced in beige tiles at ground level, often also had panels for Toby Ale on them but I can see no evidence of that here. Instead we have some marvellous faded hanging portraits of the Duchess. 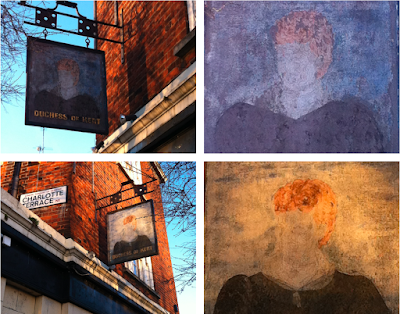 The sign faces east and west and seems to have faded to the same degree on both sides. I like it. 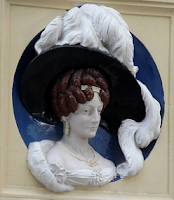 The Duchess appears to be strangely popular in Islington as there are are two more pubs bearing her name – one at 444 Liverpool Rd, and another at 72 Prebend Street where she can be seen sporting a marvellous wide-brimmed, feathered hat as shown here.

UPDATE – she could be an Irish connection – I read recently that The Duchhess Of Kent was the name of a ship that returned a famous Irish politician to these isles in the 19th century... I need to dig out more info and will update this when I find out more
No comments:

This has intrigued me for years: 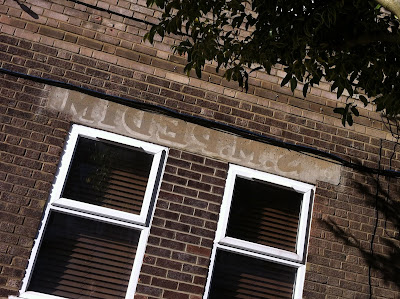 In Tollington Way, Upper Holloway, N19, on the corner of Cornwallis Road, there was up until about ten years ago a fish and chip shop and restaurant. The building has subsequently been converted into residential use and all signs of battered cod and sausages have been removed.
However, above one window we can see the reversed print of a company name S. M. PEDIM which, judging by the letterform, looks Edwardian in style.
I would assume a sign with this name on it had been painted onto a piece of wood that was later reused; flipped and attached to a wet wall, therefore transferring the name onto the plasterwork.
I can find no evidence of anyone called Pedim in the reference I have to hand.
Any ideas?