London is getting greener by the day...
Continuing on from my last post about the gardens at the Southbank, this one is about a living wall that has been created on the side of The Rubens At The Palace Hotel, a stone's throw from Victoria Station.
Designer Gary Grant has covered the whole side wall with "one of the most diverse collections of plants on a living wall in Europe". 350 square metres –10,000 ferns and herbaceous plants in 16 tons of soil.
I went along on the launch night which included a ride on the hoist so we could get up close, hear about the plants and see the watering system which recycles rainwater and helps to reduce the amount of flood water falling to street level.
Living walls don't just look good; they attract birds and insects, although I can't help but think if all the trees hadn't been pulled up and the earth concreted over there wouldn't be a problem with lack of flora and fauna and over flowing sewers in the first instance!
Anyway, well done Rubens for making such a brilliant effort to pretty up an ugly end wall. It really does look good and I am sure will be well-received.
It could look even better if a suggestion I made to the Rubens manager is taken on... it would be a good idea to paint the unplanted street level section of the wall, a dark natural green or brown to look like part of the plating. When I was there it was a nasty grey/magnolia colour. I wonder if this absolutely brilliant idea of mine was taken on... I must pop back and check... watch this space. 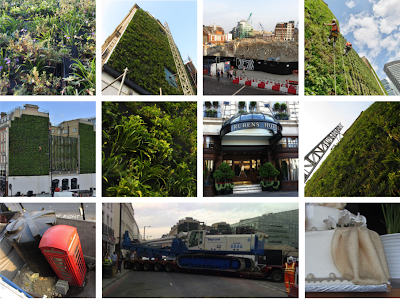 As someone who has been up a lot of tall buildings these days the hoist experience was a little disappointing as I has been hoping to go all the way to the top, not just the first floor... but hey, beggars, choosers, free drinks and canapés etc!
The area between the Rubens and Victoria has been flattened and it undergoing renovation. All that's left of real interest at the moment is the Victoria Palace, the old station arcade and a few of its adjacent buildings. From the vantage point of the hoist's cradle this architectural hole was as interesting to me as the plants and I took a few snaps.
It was quite an eventful evening, actually. On the way to the Rubens I had bumped into a friend; the very inspirational Deborah Henry-Pollard. As I left the Rubens and headed for the station I stopped to take some pictures of a particularly nasty cake in a cafe window (see bottom left) which was at least 3mm thick with dust – yeurch. Then I stood bemused and amused as really long lorry carrying a caterpillar thing did what I guess was a 137-point turn, moving back and forth in 20cm 1 degree increments, to get into the building site. When I got home half an hour later it turns out some bird called Kate had given birth and people were amassing near that big house round the corner from the Rubens. Had I turned the other way when exiting the Rubens and gone home via St James's Park I have been caught up in something surreal... Phew! That was close!