A cotton-picking conundrum in Goswell Road

There is a lovely temple-esque tiled façade on a building at 338-346 Goswell Road, a stone's throw from the Angel junction in Islington. On it are four roundels depicting, from left to right, a worker in a cotton field, a sailing ship, a steam ship and a steam train.

In 2015 the paint on the window panels was removed to appear as a bronze colour, taking them back to how I suspect they would have appeared when the building was first constructed. Then, in 2019, a lick of black paint was applied.

In the last few years there has been serious debate concerning the depictions of historic figures associated with the slave trade. This has lead to the subsequent removal of statues and memorials across the country. Here in Islington, questions were also raised about this Goswell Road building and whether the roundel showing a black worker in a cotton field was suitable in today's climate.

In November 2020 scaffolding was erected and, during another renovation process, the roundel depicting the cotton fields was over-painted as solid blue. However, if you look closely, indeed from the other side of the road, you can easily still make out the raised lines. 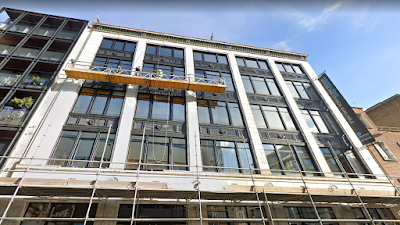 Whilst I do understand the important decisions we should make as to who is commemorated on our streets, nobody has as yet come up with a decent explanation as to why this cotton-picking roundel was put here in the first instance; who or what does it accurately relates to? And I think that's important. If mistakes have been made then we should learn from them. I, for one, would like to see a small plaque at street level, explaining why the blue paint is there so that people can learn about the past and how we should improve ourselves going forward.

So who built 338-346 Goswell Road? And for whom? Where were the cotton fields? Over the past six years or so I've occasionally tried to look into this and I have a few ideas (see below). Back in 2016, an enquiry on the subject was made to Islington Archaeology and History Society and Michael Reading gave this explanation which seems to have become the cut-and-paste explanation for everywhere else I've seen it referenced:

[edited] These used to be five separate properties ... a variety of business and trades, except for no 346 which was occupied for the whole period as the Brethren Meeting House. From around 1930 to 1933, there were no entries ... The 1933 directory shows that nos 338-346 were occupied by the International Tobacco Company Ltd and Peter Jackson (Tobacco Manufacturers) Ltd. The 1935 directory has the same entry, but 1939 shows that these premises were now occupied by Post Office Stores Dept (Goswell Road Dept)... I would venture the black worker signifies tobacco farming. The two images of ships, one by sail and the other by steam, signify the export of tobacco around the world over many years and, finally, the image of a steam train the delivery of finished tobacco products.

Having checked the available directories and maps myself, this all rings true as regards who was there at those dates. However, this often-repeated explanation of the roundels has always confounded me being as the depiction here is clearly of cotton fields rather than a tobacco plantation.

A few years ago I found something about this site being the premises of the Cooperative Wholesale Society but I cannot now find where I sourced that – I probably lost my reference in The Great AppleMac Crash of 2018 along with a large chunk of other un-archived research – grr!  If my memory serves me well, and this is indeed a CWS construction, I'd suggest that this beautifully designed building is a product of the architects working under consistently-innovative Leonard Grey Ekins, head of the CWS's London-based architects, and the gap in the records could suggest that the building was constructed in the early 1930s, which visually looks to be about right. Then, when CWS vacated the site the tobacco company moved in for a while prior to the buildng becoming the Post Office Stores.

This would explain the reference to cotton farming and the transport of that commodity because Robert Owen, the founder of the CWS, was a social reformer and philanthropist who had started as an importer of cotton. If Robert Owen is the key to the roundels, and I rather hope so, then I very much doubt that he was employing what we'd call 'slaves'. As an advocate of workers' rights and good working conditions, he would have more likely paid his workers a decent wage and offered on-site housing of some kind.

I had an idea that perhaps the building simply depicts some motifs relevant to the area's history. Indeed there is another link to cotton here – British History Online makes reference to John Hall, a City cotton merchant having factory premises adjacent to here in the late 18th century and this also ties in rather well with the images in the four roundels. John Hall is quite a common name, and I found this, which I think is probably the same man and makes for interesting reading. But, if that is indeed what's being shown here, it still doesn't explain who constructed the building and for whom, so I'm clinging on to my Robert Owen idea and I will update here if I find out more.

Oh, and another thing... I am wondering if these ceramic roundels were created by the wonderfully-gifted Gilbert Bayes as they really do look like his style. Which reminds me, I really must organise an online talk about him. To much to do, too little time... 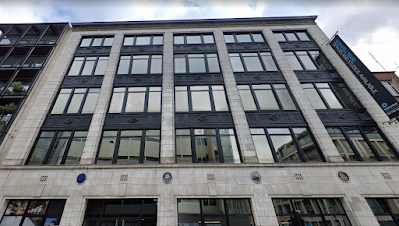