Spitalfields is a constantly-changing layer cake of London history. Over the centuries many different ethnic groups have lived in the area including Hugenots, Jews, Irish and Bangladeshis. Today the area is buzzing with markets and bars and is also known as Banglatown.
Back at the end of the 17th century the Hugenots fled from their native France, settled in Spitalfields where they built some wonderful houses in which they created and sold their much sought-after silk textiles.
Centuries passed and by the 1960s these marvellous houses had become very delapidated and were due for demolition but, thanks to a group of conservationists which included Dan Cruikshank, a few streets of these old terraces were saved and still remain today.
One particular house, 19 Princelet Street, is not just a Hugenot survivor, but also has a Jewish syangogue 'hidden' within it. The story goes that the synagogue, which occupies the garden area at the back of the house, was boarded up around 1960 and subsequent tenants didn't even know it was there. I find that hard to believe, but hey. The building is now a kind of time capsule and it is managed by a team of volunteers who open it up to the public for a few days every year. I went there last month and found it to be an amazing place. Future opening dates here.
The pics below show some of the wonderful details to be found on these Hugenot houses. Most are probably reproduction/replacements but they are still lovely. Note especially the lovely little window shutter fixings – I found many more similar ones in western France. 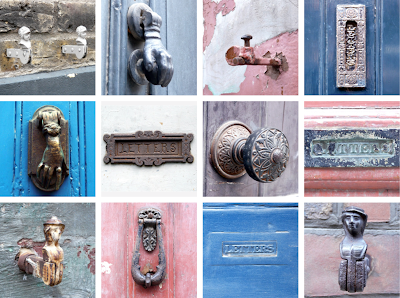