Aha! As I had suspected... the ghost sign facing East along The Vale in Acton, W3, that I alluded to a few weeks ago in my post about Christmas Day, is indeed advertising the services of a business further along the street. 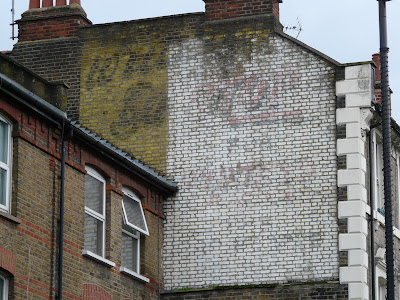 I messed about in Photoshop with one of my other images until I could make out the following: 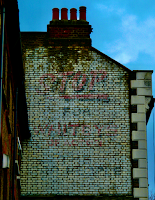 STOP
FOR
WHITBYS
OF ACTON
THE
[3 letters] PEOPLE
[rely on or similar?]

A quick Googlywoogle and I found this 1935 ad showing that Whitby's was a motorcycle dealership specialising in BSA bikes.

A second bit of printed ephemera here shows that the building was adapted to how we see it today in a more Streamline Moderne style, complete with long horizontal windows and hexagonal corner turret and this is how it appears today. I have often made many mental notes to find out more, but never applied myself to the task until now and I am really glad to have discovered that it was indeed part of motoring history.

However, I hadn't considered motor bikes and had long assumed that the building was previously a petrol station or a car showroom. Aha again. This is backed up by the Post Office listing for 1939 which shows, Whitby's of Acton, Motor Car Agents. At that time the company is also listed at No.7 The Vale here at the junction of Askew Rd, which I am assuming was the office for admin etc.

I do love an old pre-WWII garage, especially those that were adapted or newly constructed at that time in what was to later be called the Art Deco style, the best known of which is the Daimler Garage in Bloomsbury.

Back to the ghostsign... as regards the two layers of yellow and black paint peeking out at top left, I am doubtful that these allude to Whitby's, even though the first letter we can see is indeed a W, albeit lower case.  I think, judging by the style, it was more likely for a completely different company or brand, possibly a newspaper.,