Overground to Willesden Junction and Harlesden in the rain

I had an appointment in Kentish Town on Wednesday 28th December at 10am. I took the 29 bus from Holloway and got off at Camden Town Station. This reminded me that I'd read on Ian Visits, that the Overground Line was making a detour for a few days to allow for maintenance work on the section between Camden and Willesden, so after my appointment I returned to the station to take advantage of the mystery tour.

From Camden Town Station the train branched left (ooh the excitement!) then slowly glided (glid?) over Hawley Street to the west side of Chalk Farm Road passing the rear of The Roundhouse and stopping for a while at the moss covered defunct platforms of old Primrose Hill Station. How annoying it was raining. Photos were futile. And then we chugged slowly through a tunnel to emerge at South Hampstead, which is basically Swiss Cottage East, if there was such a place.

I toyed with the idea of getting off at Kilburn, but decided to stay on the train to Willesden Junction. By now it was raining quite heavily. I'd only popped out for an hour for a journey that was supposed to involve a quick bus ride to Camden and back and there I was in the wide open spaces of NW10. I considered getting on a Bakerloo train that was pulling in to the adjacent platform. It said 'Elephant and Castle' on the front and I was tempted to head south, for the novelty of using a tube line that I only ever get on if I need to go to Wembley Central from Baker Street, which is rare, but instead found myself climbing the steps to street level where I headed north and investigated the nearby streets, along pavements I haven't pounded for about 10 years.

Willesden Junction isn't really near Willesden Green or Willesden cemetery at all. It's actually the main station for Harlseden which, until only a few decades ago, was a go-to shopping area. I recall going there many times with my friend back in the mid-80s. Its demise as a shopping zone must have come about when Brent Cross shopping mall opened followed later by Westfield at Shepherd's Bush. Both are short bus rides away. 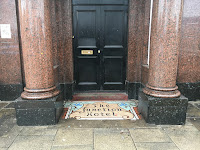 Near the station, there's a marvellous old hotel building complete with imposing portico and mosaic threshold, but the building appears to empty now.

Further into the shopping streets, I was pleased to see that Harlesden town centre retains many signs of its Victorian heyday.

A few hand-painted ghostsigns are still there including the fab Whitbread stout sign, but a little further along that terrace I hunted in vain for the vitreous enamel sign that announced 'you may telephone from here' that used to be above the newsagent.
A large hand-painted sign at the end of the High Street, facing north into Craven Park still needs deciphering, though I think it's advertised Victoria Wines Ltd. Any ideas?

At 4 Park Parade there is a grocer shop that was once part of the David Greig chain. I have a bit of a thing about DG shops and have been known to shout "Stop the car!" if, when passing, I notice remnants of an old shop. These are evident by the name, the initials or thistle motifs. Having just done a quick search of this blog it's hard to believe I haven't pulled together a collection of my collection as it's far bigger than the pics shown in the above link. As you can see from streetview the Harlesden shop still retains the DG pilasters on each side of the exterior. Inside has fully-tiled walls sporting the thistle motif, though most of those tiles are covered by products and many of the tiles are damaged where shelving brackets have been added and removed. Nevertheless it is one of the best DG interiors I found in London.

The rain was starting to get the better of me and my hat was not really the right one for wet weather. I was also starting to get hungry. A No.18 bus came down Craven Park with Euston Station on its bus blind. I nabbed a top deck front seat and sat there all the way to the end peering through the steamed-up rain droplet-ed windows at intriguing buildings along Harrow Road, making a mental note to go back again soon.

I was back home in Holloway and changed into dry clothes by 1.45pm. What an interesting, unexpected and productive morning. Who needs world travel when London offers so much..?