I hope you spent Christmas Day doing something that makes you happy, because I surely did. 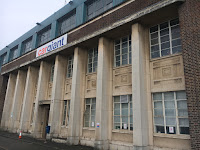 A friend picked me up in his car and we headed to NW London where we at first pootled around the streets either side of Scrubs Lane in North Kensington and East Acton, specifically in the industrial estates around Willesden Junction.
Ooh I love a well-designed old factory building, especially one that pre-dates WWII, such as this fine example which wa originally constructed as the Rolls Royce manufactory.
We then investigated the upper slopes of Counters Creek, one of the mostly-disappeared Thames' tributaries that, as it makes its way southwards from its source somewhere near Kensal Green Cemetery, becomes Chelsea Creek, for obvious reasons.
From there we made our way down Old Oak Lane, stopping to lament at the sad loss of a lovely old green and gold shop front that was once W. Burrow & Sons Fish and Chip Restaurant. 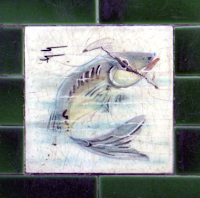 These pics show how the shop used to look back in January 2009 but there's nothing left of it today except the hand-painted sign, high up on on the east side of that building, hinting at a world before UPVC windows.
Further south, we investigated the buildings in Warple Way and Stanley Gardens, an area that used to be railway sidings.
Acton's main shopping streets boast some interesting old shop fronts and repurposed buildings plus quite a few ghost signs of various kinds. We tried to decipher the letters in the multi-layered ghost sign on the East-facing wall above 265 Uxbridge Road. There's at least two signs there. The earlier one is black script on yellow and a later sign is red on white. I will return to this at another date when I've got more time to work it out. 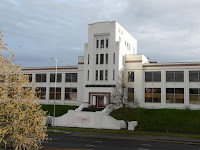 And so to the A4, the Great West Road, the main arterial thoroughfare cutting through Brentford. We were specifically interested in the short stretch of road just west of the River Brent which boasts many excellent examples of interwar architectural elegance. Consider that these fine constructions, which resemble cinemas or grand hotels, were actually built as factories! 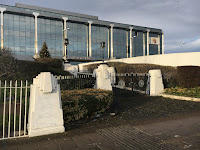 These temples to industry were constructed for Gillette, Pyrene, Coty and Firestone, the last of which only the gateposts remain after the vicious demolition of the main building on August Bank Holiday Monday 1980. 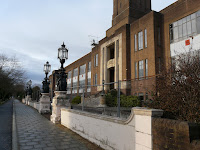 A fab day out.
Shown here are some pics I took with my phone. I took lots more, but they're on my camera. i need more hours in the day, more days in the week... 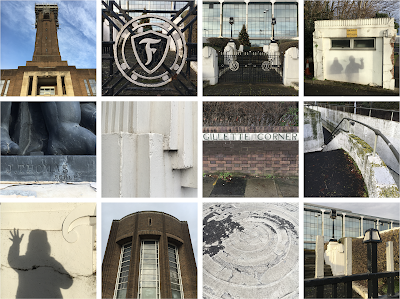