Have you ever spotted the coal hole cover plates around the edge of Parliament Square? 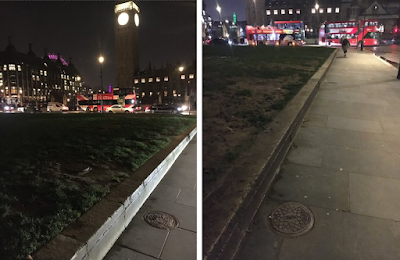 We take for granted that this open space adjacent to Westminster Abbey and the Palace of Westminster has always been here, but it wasn't created until 1868, as these well-spaced coal hole plates along the southern side of the square clearly indicate – there used to be houses here.

The new square was designed to improve traffic flow, indeed the first set of traffic lights was installed approximately where Winston Churchill stands today. The revised road layout necessitated the loss of many buildings and a complete change in the topography of the area.

Here are a couple of maps to show the layout before the parliament buildings, the grass and demonstration space:

Above, Greenwood's map of 1828 shows a labyrinth of little streets – I particularly like the name of the street with the dog leg; Thieving Lane!

The second map is from the 1890s and shows the District Line running under the area and Charles Barrie's parliament buildings.

I am still unclear which exact buildings the coal holes actually served. Any help welcome.