I am here catching up with my travels this past week.

On Boxing Day, 26 Dec 2022, after a day spent admiring Art Deco temples to industry, I had intended to stay at home, take it easy, edit yesterday's photos, perhaps do a bit of DIY, mend a few things with the sewing machine, listen to music, watch a couple of recorded movies etc.

But the sky was blue and inviting – it was much too nice out there to be staying inside so I walked out of the front door and followed my nose. Zig-zagging through Tufnell Park, and Dartmouth Park, I fund myself heading north towards Highgate Village and as I passed the tennis courts a No.88 started up, its destination blind telling me that it went all the way to Clapham Common. Ooh, I thought, I've never travelled this route. So I hopped on and took up a 90 minute residence on the upper deck offside front seat. And what a treat...

It went through Kentish Town, across Camden High Street into Delancey Street and then left into Albany Street, across to Gt Portland Street area and down Regent Street to Oxford Circus. There was at that point an audible 'wow' but not because of a marvellous view. I was amazed to see how many people were out shopping. From my elevated viewpoint the crowds looked like a writhing mass of black ants being as there were hardly any colours other than than the dark end of monochrome being worn. It was basically a sea of uniform black puffa jackets and dark jeans. It occurred to me that their carrier bags were also probably full of the same replica clothes.

The people on the seats nearby were also commenting on this. This led to some amusing conversations with us all questioning why would these shoppers, who we all decided were visiting tourists, be doing this on such a nice day when there was so much more to see and do in London. Perhaps the best sale-price puffa jackets get snapped up quickly? It was definitely consumerism because once past Piccadilly Circus the density of humans on the streets subsided considerably and I noticed that Trafalgar Square, Whitehall and Parliament Square were fairly empty.

The bus continued past Westminster Abbey and turned left into Gt Smith Street and Marsham Street to stop behind The Tate Gallery. Then over Vauxhall Bridge with great views up and down the Thames. Then into Vauxhall bus station which confuses me for many reasons. I recently asked a friend who lives near there 'where is Vauxhall?' – I was serious, because there is nothing much left of Vauxhall at all as regards a shopping street or obvious centre. Just a row of buildings that hint at a bygone high street, and a Georgian era house clinging on to a plot of land, today occupied by Lassco the reclamation company. Every time I revisit that area always have to go and check that it's still hanging on in there.

The junction is surrounded by areas of wasteland and a half-designed recreation space surrounded by high rise glass – here's the view from Vauxhall bus station. Many years ago I went to a promotional thing about the renovation of the area. They talked about 'Vauxhall Village' and I queried where that was supposed to be. They as good as said they were creating it, as some kind of community environment. I'm still looking for it.

From the canopied island, the No.88 bus continues down South Lambeth Road to Stockwell where it joins the A3 and makes its way down Clapham High Street. 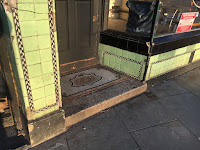 I got off the bus at Clapham Common South Side just before the end of the route so that I could have wander around there and check up on some of the old hand-painted ghostsigns including the well-documented printer's one, the insurance one and chemist's one.

The streets that abut the common, in the Old Town still retain some lovely old shops, many still sporting large display windows, threshold mosaics, spindle window frames, and old shop names such as at 16 The Pavement which shows WSD (Welford's Surrey Dairies Ltd.) between its lovely green tiled frontage complete with those lovely black and white border tiles that were so common on dairies in the Victorian into Edwardian era. 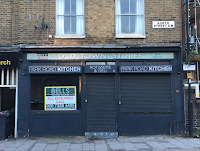 Just north of there, at 13 North Street, there's the old hand-painted sign of aWavy Line grocery store. I'm surprised here's no Wikipedia site for that company as I recall in the 1970s they were everywhere, the equivalent of a Sainsbury's Local today. Go Google.

On reaching Wandsworth Road I checked up on a few hand-painted ghostsigns in the area. The Redfern's one, the Nestlé one, the sanitary engineer one. I took a few photos but buy this time it was well gone 3.30pm and light was fading, so my pics aren't that good. A strange Art Deco structure beckoned me and I was tempted to investigate the industrial streets behind it to the north but decided it was probably best to postpone that for another, brighter, longer day.

I continued my walk along the main road passing Larkhall Park where there's a pub sporting the name of a North London brewery on the left and a ghostsign for pungent pink ointment on the right, as well as many hints of old shops and the like.  There is an interesting mis of architecture here including Georgian houses converted to shops at low level, imposing but elegantly-design social housing developments, a 1928 Royal Arsenal Co-operative branch building pronouncing "Each for all and all for each" and a 1936 Granada cinema building that is now a gym. I notice that cinema was opened by Gracie Fields. She seems to have been very busy cutting ribbons and laying foundations stones at that time.

As I approached Vauxhall proper I recalled that a workmate lived in this area in the early 1990s. I do remember that we went shopping in the big new Sainsbury's to get stuff to cook for dinner. I recall a little Victorian cottage very near to the railway lines which I thought was probably between Wyvil Street and Miles Road. so I wandered up and down that vicinity but couldn't find anything suitable. Looking at an old map now, perhaps that residential street has been demolished as it could have been here at truncated Trenchold Street. However, more likely is that he lived on the other side of the junction here in the little streets adjacent to Vauxhall Park (not the pleasure gardens) in what must be, drum roll please... the only bit of 'Vauxhall Village' left today.

And then I remembered that I used to visit here often about ten years ago when Kiwi friends lived adjacent to Lansdowne Gdns. Isn't it weird how we forget things. It was by now getting dark. And cold. I toyed with the idea of waiting for a No.88 to take me back but decided, seeing as I'd have to then change to another bus in Camden, that the Underground was much a more sensible idea, Victoria Line to Finsbury Park.

Another really good day out. Here's a montage of some of the nice things I spotted: 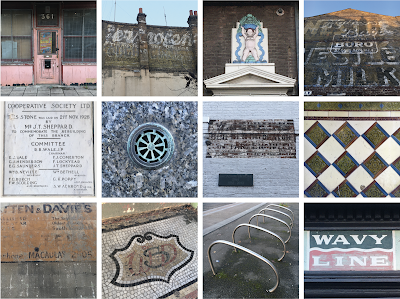