Holloway Road, The Oxford Street of The North*

I moved to Holloway over three decades ago. Back then there was a good selection of shops – well-known high street names mixed in with a healthy range of independent local businesses, a market that was a different each day of the week, another outdoor/carboot market in the school playground at the weekend, and a couple of department stores.

Within two years, in July 1990, Jones Bros department store closed, later to be replaced by a Waitrose. Then, a few years later, Next shut up shop here, as did Mark One, River Island, Ravel, Shelly's shoes and other well-known names. And since that, for whatever reason, there has been a drip, drip effect. It's sad, but it's not all bad. 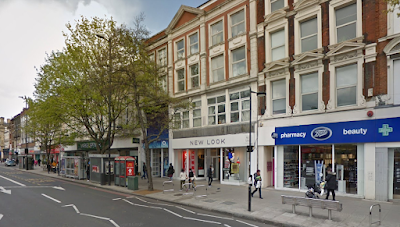 Marks and Spencer, a fixture of the area since the later Victorian heyday* closed a few years ago (behind the tree in this pic), even though it was understandable seeing as it was rarely busy in there. Yet the company has opened up other stores in nearby Archway and Finsbury Park, and Lidl successfully filled this N7 space. See an old post about M&S here.
New Look disappeared during the pandemic and a few months ago I noticed that Barclays Bank had gone, having been at the corner of Parkhurst Road for over 140yrs (see pic further down). Just last week the Clarks factory outlet store on Seven Sisters Road closed its doors for the last time. 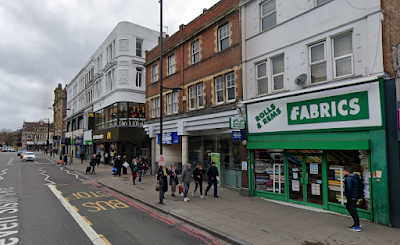 Of the independent traders and small businesses that have gone, I was saddened to see Rolls and Rems fabric shop and Michael’s greengrocer, both well-known traders on Seven Sisters Rd for +20yrs of trading, close their doors, adding their names to the long list of bygone businesses that I recall from the 1990s. 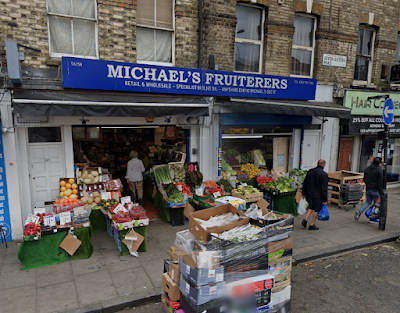 Despite these losses, I am often to be heard saying that Holloway has everything you need – we still have Selbys department store which is marvellous, yet I am sure that only a tiny percentage of people who live near here have never been inside to see what's on offer (it might be due to the often poor advertising in the windows along Holloway Road which often makes it look like a sale outlet) – I was in there last week chatting to a member of staff discussing how sad it was to see so devoid of shoppers despite the excellent range of products available. 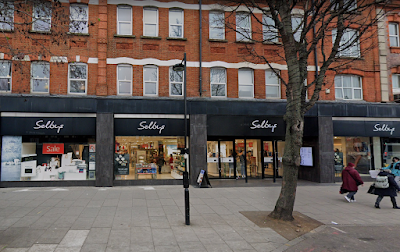 On the ground floor, for instance, there are lots of well-known fashion names such as Whistles, White Stuff, Seasalt, Benetton and Barbour, plus a major cosmetic brands, quality accessories, lingerie and menswear inc Levis etc. Oh, and lots of shoes, such that I'd say it's the best shoe shop in Holloway, yet hardly anyone seems to know it's all in there. The next floor is a one stop shop for home and haberdashery. I have given up looking anywhere else for bed linen, furnishings and kitchenware because other stores miles away in Oxford St or in retail parks. just don't have the same choice.  Next time you are in the area heading for Morrisons, walk through Selbys and exit via the rear door in the precinct.
We also have Argos, many supermarkets, lots of fresh food outlets, plus our fair share of pound stores, charity shops, market stalls and more – we have this past year seen a more shops leave the area, probably exacerbated by a mix of Brexit and the Covid-19 pandemic. 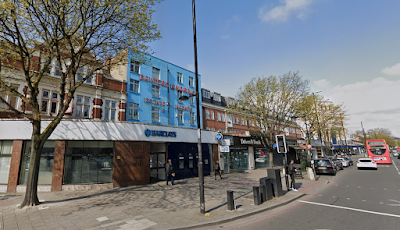 I am now wondering which business is the oldest here after Selbys which started as a drapery store in 1895 and Drivers and Norris which can trace its history back to 1852. I am pretty sure, since the closure of some of the shops mentioned above that these two companies are unusual vis their history in N7. My guess as to the 3rd-longest trading outlet here would be Boots the Chemist or possibly NatWest.
The Great Britain as a nation of shopkeepers era has definitely passed us by now, by which I mean, just like many shopping areas of this kind, we have a wonderful diversity offering products and services from around the world, be it German burgers, Turkish barbershops, or Chinese groceries.
As such, I wonder if today there are any independent businesses that can claim to have been trading here for 20 years or more. The ones that spring to mind, and I need to check this, are food outlets such The Holy Chinese takeaway and Crystals kebab restaurant, both opposite the Odeon on Holloway Road, and I do know that the EyeValue opticians has been in Holloway since 2001. Perhaps some of the barbers and hairdressers can also claim a medal here, and possibly Holloway Stationers and Book Shop opposite Selbys. 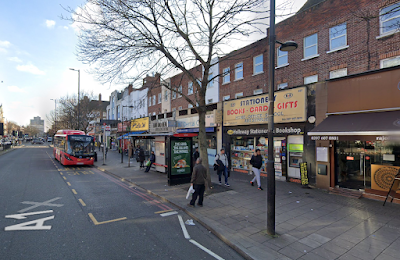 I have a plan to look further into this and go into the shops to talk to the owners and ask for more info. That would be nice thing to do, so watch this space.
More posts about Holloway here.
Please do check in again for an update, or add you own thoughts, suggestions and memories below. Alternatively, send me an email: jane@janeslondon.com
Pics are all screen grabs from Google Streetview here – to see previous years, as shown above, use the retrospective facility via the small inset window (tab at top left when viewing on a large screen).
* The area was often referred to as "The Oxford Street of The North"* – if you want to find out more about that late Victorian shopping heyday, or the Art Deco era, please join me for a guided walk via janeslondonwalks.com.