Watching the world go by from the top deck of a No.263 to High Barnet, I happened to notice that the street numbers along the High Road, A1000, are in the high 800s. Hmm, I thought, how intriguing. That's much higher than Holloway Road which, at two miles long, goes up to 695 on the West side and 804 the East side and used to extend to 820 before the last block was demolished north of Giesbach Rd.
I wondered how high this ancient route through Finchley and Whetstone goes up to and sat amazed, watching as numbers went ever higher, through the 900s, then past 1200... 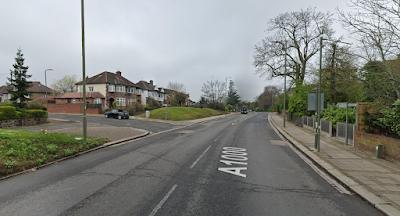 Well, it turns out that Finchley High Road goes up to 1541 on the West side and 1536 on the East side. As shown in the Google Streetview above, showing the junction of Walfield Avenue, N20, here the High Road name ends and the ancient title of The Great North Road is seen, as seen on the street sign above the pavement.
Then, as the Gt Nth Rd continues northwards it become Pricklers Hill, then Gt Nth Rd again, then Barnet Hill and High Street before reverting to the Gt Nth Rd again as it passes Monken Hadley on its way to Scotland. Soonafter it's called Barnet Road hinting at it being the road to Barnet from the North. Road names of this kind always amuse me, after all, it depends which way you are travelling!
Intrigued by these high numbers, I looked to find other long roads in the UK and discovered that the prize for four-figure door numbers goes to No.2679 Stratford Road which can be found on a stretch of the A3400 linking Bordesley to Hockley Heath, Solihull. It continues to, you've guessed it, Stratford-on-Avon. Oh my god! I thought door numbers as high as that were only to be found in other countries, such as the US!
The houses along the Stratford Road there are quite spaced out and the road is about 10 miles long. In comparison, the A1000 starts just south of East Finchley here and covering a distance of about 4 miles, comprising terraces of various kinds and paired villas, so I think the Barnet road wins on density in a look how much you get for your money kind of way!