Last week I was looking up at demons and here I am looking down again, but it's far from gloomy...

I was recently on a mission to check up on some 'Art Deco' buildings in the area between Marylebone Station and Baker Street when I happened to spot a few coal hole cover plates with names on that I was sure I hadn't seen before. The one that first caught my eye was in Balcombe Street almost at the junction Ivor Place and it bore the name 'Whitehead'. I took a snapped a quick pic and was about to continue my journey when I noticed another plate a few metres away with the same name but a sporting different design (see below, top left and middle). Hmmm... I scanned some adjacent plates and noticed the diversity of names, a couple of which I was convinced weren't in my mental database.

Oh gawd. What to do? Continue with PlanA or let myself get distracted by this new project? Of course, I went for the latter. 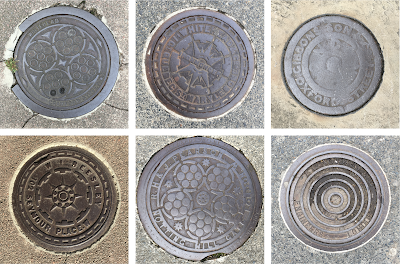 I have endeavoured to show the plates in roughly proportion to each other here. Most residential plates are the smaller 12" ones (excluding the outer ring), though I did snap a couple of the larger 15" ones which are more usually seen outside larger establishments such as pubs or restaurants and this hints to me that some of these houses here, being a stone's throw from Marylebone Station, were hotels. Indeed, I didn't check to see if they might still be.

A few of the plates here have holes within the designs to allow ventilation within the coal cellar below. These are evidently part of their manufacture, but I have seen many examples elsewhere where holes have been retrospectively drilled in a random fashion by people who clearly have no regard for the design!  The three different Matts plates (below) show how that company's name and address has evolved in many ways. 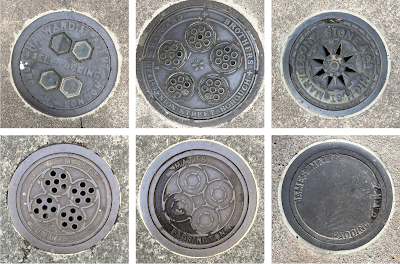 Notice how in some cases the patterns on the covers are the almost identical. This is simply because the ironmonger's name has been added to a pre-made mould that was already available at the foundry. However, some of the more successful and wealthy ironmongers had their own bespoke, and therefore identifiable, designs created, as per the Gibbons plate at the very top and, although the initial process would have been expensive, repeat orders from that mould would be the same price as the off-the-shelf ones. 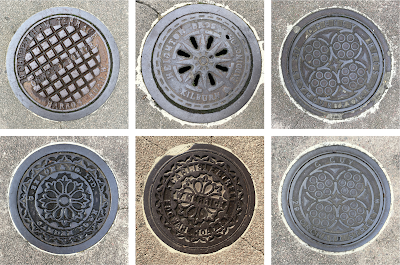 Unusually, compared to other streets of this era, there is no clear single winner amongst the range of local ironmongers shown. Elsewhere, it's evident that one local business has been engaged to supply the plates for a whole terrace having been contracted by the developer or contractor when the houses were first built. Instead, in this part of Marylebone, there is a mix of all sorts – some show local businesses in Marylebone, Edgware Rd and Lisson Grove, but others come from further afield, but only a few miles, as can be seen by the streets and locations on them. There are, of course, quite a few sporting the name Haywards of Southwark, the company being the B&Q of their day. And, without going back to count them, I'd guess either Sampson of Euston Road or Matts of Paddington were the two most common local names in this vicinity, with Stone coming in 4th.

Something else I found in Balcombe Street that I don't think I have seen before... some HUGE slabs of York stone paving which I estimate are almost the size of a double bed. 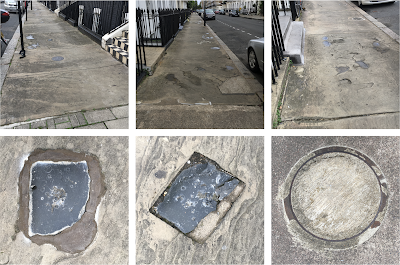 At the top end of the street, north of Ivor Place, on both sides of the road, some unusually large pieces of natural stone sit above the coal cellars as street paving. These super-size slabs must have been really expensive and I wonder how they were transported and how difficult it was to install them. There are coal holes within every one of them although some have been removed or infilled. A few of the coal holes have been filled and replaced with strange bits of flint that looks like left-overs from church walling – something else I have never seen the like of before.

Looking down can be so fascinating... later that day, I as good as stumbled upon a 21" Haywards cover plate about half a mile away from Balcombe Street, by which time I had run out of phone battery and it was getting dark. I will return to it soon and put together another collection.