Earlier this year I wrote about the vile plans for Willen House in Bath Street, Moorfields, and how a horrible coating of dull grey paint will soon be covering a truly unique 20th Century building.

Well, just around the corner, in an area that forms part of a conservation area, there is another building that earlier this year succumbed to the slate grey treatment. I had noticed that scaffolding had been erected around it last year and I simply thought it was being cleaned. It used to look like this (pics from Google streetview): 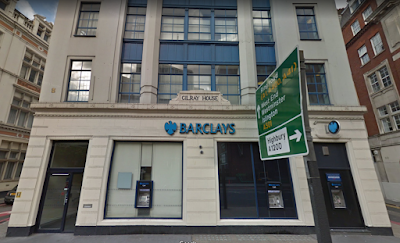 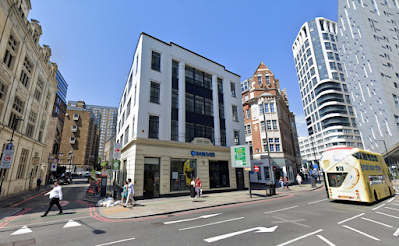 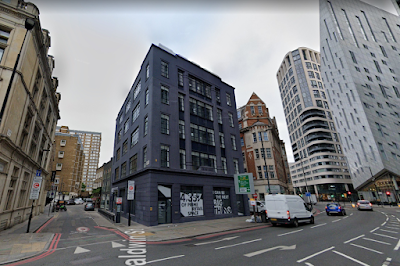 I have often wondered if the name of the building is in some way related to the clever Georgian artist and satirsist James Gilray. I hope not, because this is no laughing matter. The delicate details are now hard to see. It has been sloshed over with what looks like a layer of thick soot, slathered across the whole building all the way up to the top where only the new addition on the roof, which looks like a spaceship, is a unpainted.

I am saddeneed at the grey-washing of the 'deco-esque' upperfloors which continues across the elegant metal windows, previously highlighted in Barclays Bank blue which sang out against the pure white walls and contrasted with the creamy-coloured faeince tiles of the streetlevel banking hall. The whole clearly showed how the architecture in the 1920s morphed from pretty decorative styles into the simplicity of the Bauhaus. The building not only housed Barclays Bank for almost a century, but it was also originally a Post Office with offices above for Royal Mail employees.

About 8 years ago, the building was renovated and cleaned and I understood at that time that an application had previously been made to add anther storey or two to the top and this had been rejected due to this being in the Moorfields conservation area, although they did allow another floor to be added, but it was not visible from street level – notice how the buildings on this West side of City Road are all relatively low level in comparison to the high rise modern monoliths on the other side that, incidentally, have generated a nasty wind tunnel, especially problematical as you approach Old Street from East Road. I wonder if the energy created by these manmade howling gales here, and elsewhere where other ridiculously tall buildings have been constructed, could somehow be harnessed to exacerbate the forthcoming fuel bills. And what happened to that idea about gym running machines as generators? Anyway, I digress...

Conservation areas are clearly pointless. They do little protect the buildings from greedy developers keen to cut corners and make a quick buck. But I notice here at Gilray House that the horrid light-absorbing shades of dullsville on this East-facing site has done little to tempt in new leasehoolders – most, if not all of the building, is standing empty. A big shame all round.

This building and Willen House feature on my Art Deco Shoreditch walking tour.