Last week I delivered a talk about coal hole cover plates at London Historian's History in the Pub night. This meant I had to wade through my photos to choose the best ones to best illustrate the diversity and how these things intrigue me. I am known for stopping suddenly in the street, mid-conversation with a friend, because I have spotted a name or a design that I have never seen before. I have written about these discs in the past, see here.

Since last Wednesday's talk I have been revisiting my archive in an attempt to better collate them and delete the repeats, but with coal holes now uppermost in my brain, I have been out spotting more and have further expanded my photographic collection. I've even started making a A-Z list of the ironmongers' names that I have found. This shows how names evolve and businesses move to new locations or expand within an area. Talk about nerdy, or is it geekery?!

Yesterday I was in Canonbury Square, Islington, N1, so I walked the full perimeter to see what unusual delights I could find: 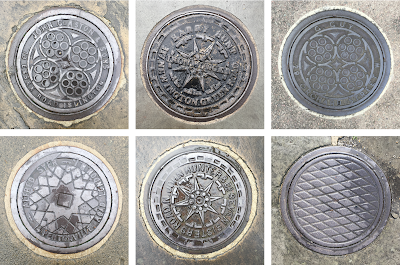 I discovered only five names and quite a lot of generic ones with no specific wording – the patterns on the plates offering a textured non-slip surface, as per the ones along the eastern side where George Orwell used to live. The one showed bottom right here can be found nearest to the green plaque commemorating the Big Brother author.

Of the named ones, I would guesstimate about 80% of them,bear the name John Aston, a company that was located nearby at 70 Essex Road at the corner of Britannia Row. The lovely Georgian building, that +100 years ago would have been festooned with ironmongery and all things household is still there today but it's occupied by an estate agent. However, the Aston company lives on as part of Aston Matthews further along the street at 114-117.

Of the other plates in Canonbury Square, Alfred Syer and John Hunter were both based about a mile away adjacent to the busy Nags Head shopping area of Holloway N7 and, being just around the corner to me, would have been my personal local ironmongers, though I wouldn't have needed a coal hole cover plate – these are 1870's houses but there are no coal cellars along the street – the coal would have been taken through the house to the coal bunker in the garden at the rear of the scullery.

The name Harry Hunt is new to me, having never seen one of those before, but I'm sure if I go for a wander around Newington Green I will find lots more. The G. Guy one is strange being as Orchard Street is near Selfridges, off Oxford Street, and quite how this plate ended up in Canonbury is anyone's guess. I wonder if oddities like this were replacements for missing or broken plates, either brought by here by the new resident, or purchased from a second hand dealer.