How do you pronounce Canonbury? 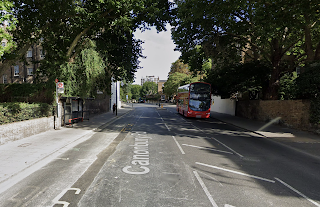 If you ever pass through Canonbury Square on a TfL 271 bus you will hear the automated announcement for the next stop. This bemuses me every time because the recorded female voice is heard to pronounce Canonbury as' Canon-burrie' turning the last part into something that rhymes with hurry or curry when it really it should be condensed to sound something like 'bree'.

The bury ending for a place name indicates that there was once a castle, stronghold or fort at that location and it can also be found in many nearby places such as Highbury and Barnsbury, yet the on-board announcements for those are OK, so why has TfL got Canonbury wrong?!

Yes, I know it's an automated, patched-together, voice thing and I could almost forgive the error if she said it in the same way as the verb 'to bury' which is pronounced 'berry' and echoes the market town in Greater Manchester. But here in Canonbury, the misappropriated burrie thing makes no sense when there is no word that sounds like that at all. I mean, what is a burrie?

Feel free to enlighten me either in a comment of via jane@janeslondon.com

Recently I wrote about the coal hole cover plates in Canonbury Square, N1.