Review of this year's Thames' Festival – a washout in many respects

This year The Mayor's Thames Festival took place over 10 days, rather than one glorious fun-packed weekend as in the past. The rationale was to spread out the events along the river to include places further up- and down-stream.
But I think this backfired. The event (I can't really use the word 'festival') was, to my mind a wash out, and not just because of the weather.
I can understand that many attractions at the Thames Festival have, in the past  had little to do with the River, but they get people out and animated and interested in places and things they might never have noticed or engaged with before. 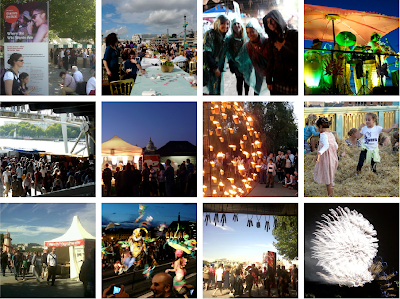 This year there was no fireworks and no parade. I believe that cutting these two key events may be the main reason for the poor turnout. To make it worse, if you visited the event site for information one of the first things you would have seen, high up on the home page, was that there would be no fireworks or parade, and the admission that funds were tight.
How very stupid!  The home page should be bigging up the good things not enhancing the negatives!! Why advertise what you don't have? Who is really going to scroll down further after reading that?!
There is a quote on the site from Adrian Evans, the Festival Director, and he says,
"By shedding the restriction of a weekend and broadening its geographical horizons, combined with a fantastic and wide-ranging programme of events, the festival will inspire people to re-connect with London’s greatest natural asset in new and surprising ways".
Inspire? how? Surprising?  Well yes. Surprising in the sense that there was nothing to see.

Because to remove practically everything that had been attracting people year on year was a really REALLY silly move.
Huge leaps in marketing and promo in the past 4 years meant that the festival had become something to mark in your diary. The parade and fireworks were spectacular and kept people at the other attractions long into the final day. A win-win for all.
This year there were walks and talks about the Thames. A great idea, but most of these were pre-book events. But there was barely anything that you could just show up and take part in as in previous years, such as the feast on Southwark Bridge, or the fire garden outside the Tate, nor were there any dancers or colourful characters walking about.
I was in London for both weekends this year trading at the We Make London Markets, first at Bernie Spain's Gardens and then More London Riverside. Only a handful of visitors to my stall at either location had any notion that there was a festival on at all.
Compared to previous years (I have going for 15 years now; 12 as a visitor and 3 as a trader) the event was a shadow of its former self. There were no signage or banners along the Southbank so people who wandered into the zone had no idea that the market and the music stage at Bernie Spain's Gardens were for the event and not just  an every-weekend occurrence. Festival? Where? Last year there were site-specific information points and tents where you could pickup colourful information-packed programmes.
It was meant to be more about the river this year. I understand that there were a few boaty things happening in and around St Katharine Docks, but as regards the Central London stretch of river I saw nothing happening on the river over the first weekend and I was there from 10am until 10pm both days.
On the evening of Saturday 14th at approx 8pm night, after a very quiet day at the Scoop with no music or entertainment at all, all day, we were suddenly blasted by a honking cacophony coming from some boats circling about in the Pool of London. Billed as a Ships' Opera, his deafening art-fart went on for much too long. It certainly wasn't singing.
On Sunday 15th there was some lovely proper singing from choirs in the Scoop. There were lots of people enjoying the music. But they evaporated when the singing stopped. I am pretty sure the crowd was made up of the choirs' friends and family. By 5pm on Sunday afternoon there was barely anyone around at all and the market packed up at 6pm. The festival finished with a whimper rather than a bang.
I noticed some some volunteers canvassing feedback about the event on badly designed A4 sheets. Half of the questions were about age, ethnic group, where you came from, why you were there etc. One question asked how much you expected to spend during the day and what proportion of that you would have spent had you not come to the festival. What a dippy question. I wrote 57%.
Another asked "How did you hear about the event?" and followed that with "would you come again?". I would be interested to see the feedback on that last question alone. Because if I was a tourist visiting London and it was my first time at the Thames Festival I certainly wouldn't be going home and telling my friends what a must-see event it was!
So, I urge you... if you went there this year and you were as disappointed as I was, then please please write to the organisers and let them know what you think... because if we all sit tight and say nothing it won't be improved upon for next year.