Continuing on from my post the other week, this one is not about nature so much as the colourful graffiti, mainly to be found in the stretch between Crouch Hill and Crouch End Hill.
For many years now kids who practiced their skateboarding skills on the half pipe at the adventure playground (now removed) would also practice their graffiti skills on the arches under the road and along the sides of the old railway tracks.
As I walked along I stopped here and there and took a few snaps of the patchwork of graffiti styles crashing into each other. The mix of nature and paint actually works quite well, especially contrasted by the vibrant grassy greens and the dark arches. 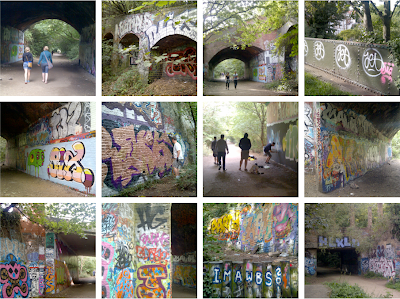 As I approached Crouch Hill Road Bridge I could see some hooded artists in action. I commented to them, in a jolly way, that the aerosol smell was quite heady. They half looked at me but ignored me. These men, for they were over 30, not kids, obviously didn't like me invading their play space.
I walked on and overheard them bitching about me and my type (something like): "who do these people think they are?", "how would they like to be photographed when they are working", "it's theft man".
I stood staring at them about 15 metres away hoping one of them might have the balls to come and speak to me but no.
What I would have said was, "you paint all over public property, yet, as a fellow member of the public, I can't take pictures of you doing that?"... "if you don't want people to see your work then don't do it public places at 5pm on a Sunday afternoon".
Nothing they were doing appeared to be very accomplished or new. I wanted to ask these untalented idiots "don't you have a wall on your own house you could practice on?!"
As you can see from the photos, I don't think Parkland Walk will be taking over from Shoreditch as the graffiti centre of London any time soon...