Tucked away in what's left of Lambeth's Old Workhouse is an Aladdin's cave of pre digital film and picture palace ephemera called The Cinema Museum.
This private, not for profit, charitable museum is the on-going life's work of Ronald Grant, ably assisted by Martin Humphries.
Ronald's passion for all things cinematic began when he was a child and, just like the boy in Cinema Paradiso, he sat with his local projectionist, gradually picking up the tricks of the trade that would form the first part of his working life at cinemas in his native Aberdeen. Over the decades he has collected all sorts of wonderful cinematic items, thus saving them from destruction or landfill. I was shocked to learn that it was actually Odeon's policy when selling their lovely old buildings not to allow items to be taken or resold for salvage; eveything was destroyed. It hardly bears thinking about. I think that's worse than the wanton vandalism that took place inside Islington's Carlton Cinema a few years back. AlthoughI ham heartened by this information about a project for renovation in conjunction with a proposed new glass building at the rear (oh gawd, here we go again).
Where was I?
Ronald and Martin have managed to salvage a lot of wonderful gems from the much-missed cinema palaces of yesteryear. You'll find posters, projectors, lenses, cannisters, signage, textiles, uniforms and more. They also show films in the mini cinema. On Saturday we were treated to four gems including 'The Last Tram', a film about, you've guessed it; London's last tram ride (excerpt here). I thought it was a rather poignant choice seeing as we were watching it via a process that isn't used any more (film) in a museum dedicated to an old way of life that is also practically deceased.
Picture palaces used to employ a large uniformed staff and be packed full all day, with more people queuing round the block. Then, once inside, they'd join a film perhaps half way through, not really understanding what was going on until the film came back on again hours later!
The museum also contains three rooms packed to the ceiling with books, papers, magazines, photos and prints, plus another room stuffed full of filing cabinets containing The Ronald Grant Archive, which helps to fund the museum collection.
At the centre of the building is the old workhouse chapel with its very high ceiling which now used as a cafe and display area. This large space is available to hire for events. Looking up, I noticed a wonderful coincidence – the original roof trusses contain a circular motifs that look just like film cannisters!
Thanks to Caroline for inviting me along. An afternoon well spent. 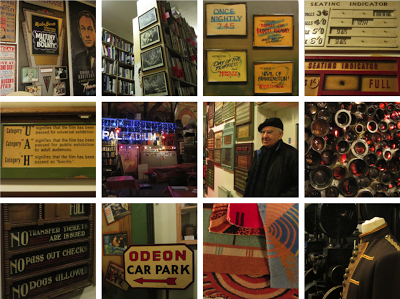