I recently posted about The Developing City; an excellent exhibition about the changing architecture in the City of London.
It was split into three sections; the past, present and future. The earlier panels were full of great info and wonderful photos of the City in past centuries. It was interesting to see and mentally compare the changes over time. I was especially intrigued by Cheapside, which has always been a shopping street. However, in the past it was lined with one-off shops selling all kinds of things, but of late it's become just another bland road plate glass shops selling coffee, clothes and phones. The church of St Mary-Le-Bow now looks squashed, out of place and off-scale compared to the buildings either side of it.
London, you see, is being over-run by plate glass. 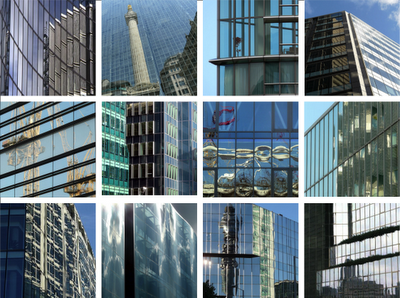 Old buildings are being torn down and replaced with HUGE glass monstrosities that, despite their shapes and silly 'friendly' names, all end up looking the same. They are, in my view, just glass towers squidged and skewed into strange shapes; vertical glasshouses with no detailing or interesting features except they can reflect a grey London sky or a better better building.
Our wonderful City is going to end up looking all new and shiny and bland like Dubai; the Dubaiification of London will soon be complete.
In a few instances listed London façades have been retained; their insides have been gutted and replaced with modern offices, walkways and glass atriums. Or extensions have been added that resemble lean-tos or green houses. Perhaps the powers that be are considering growing tomatoes and runner beans in these places if one day all the computers crash? I am now also gutted, but for a different reason – that although I do like the renovated space inside Unilever House, I didn't see it prior to its re-fit.
Back to the exhib... The 'present' section showed a collection of 80 images that they called 'the best new buildings and public spaces built in the City since 1985'. Looking at these images I could only make out a few structures that were not predominately glass, including The Millennium Bridge and terracotta-clad building in Bishops Square, Spitalfields. The plans for the immediate future show the horrible intensity of tall glass buildings that will be going up during the next decade.
The last part of the exhibition showed some visions of the future that makes it look like the Thames will become some kind of water garden for Teletubbies. Another similar idea for Smithfield had to be seen to be believed.
I cannot be alone with my concerns. One only has to see the queues on Open House Weekend for all the old and preserved buildings such as The Livery Halls, churches and old banking rooms, to understand that a lot of us appreciate intricate mosaics, and hand-carved stone and wood.
Looking forward, I do not see a logical reason to build (any more of) these biggest/tallest/pointiest 'iconic' structures (for iconic, read 'bullying'). They can't simply be show-off statement pieces – there must be more to it.
It can't be that London has a dearth of office space because you only have to look up to the empty top floors around, for instance, Oxford Street and Piccadilly, or wander the streets behind Broadgate).  So, I conclude that there must a financial gain to be made constructing big glass show-off towers.
I rather suspect that a huge tax dodge, or similar, can be achieved by off-setting building costs against profits. Or something. After all these big shiny things aren't cheap you know.
Or perhaps, in addition to growing those vegetables, these megabucks businesses are just trying to keep window cleaners in employment?
The pics in the montage above come from my 'Ugly Beautiful' folder on Flickr. Here's a similar, but shorter post from three years ago on the same subject.

A happy coincidence:
I wrote most of the above yesterday, intending to rewrite bits of it today. Last night, I sat down to watch the 4th in the series of 'The Shock of The New', a series of programmes made in 1980 by the erudite and much-missed Robert Hughes.
This episode, entitled 'Trouble in Utopia', was about modern architecture. Robert put forward his views about the idealist attempts to turn major cities, that have endured centuries of history including World wars, into minimalist Utopias, devoid of life or stimulation. He pointed out that the "inhuman" and "absurd" towers of glass just didn't work; that "nothing dates quicker than people's visions of the future". He showed that by the 80s areas of Brasilia, built in the early 60s, were already falling to pieces. Chandigarh too, Le Corbusier's personal vision of Utopia in India, commissioned by Nehru to reflect the nation's modern, progressive outlook, was also a shadow of its former self.
He also pointed out that none of the modern buildings of the 80s displayed any kind of ornamentation comparable to Chicago's Sullivan building, an early example of high-rise steel construction. (They still don't... they are just plain unadorned plate glass.)
He (wrongly) concluded the episode by predicting the death of the Utopian style of architecture, saying it just doesn't work. I'd love to have heard what he thinks of London now, and the plans for its future.
See the programme here.
In conclusion, I think many architects such as, for example, Le Corbusier and Renzo Piano, may occasionally have some brilliant ideas, but are unable to see further than their own noses. These bullying, narrow-minded, control freaks are being allowed (commissioned by sychophants?) to alter our cities too drastically, and too quickly.
Stop, stop stop. Or at least, just slow down.
There! I've said it!