Last night I went to the London launch of the 2013 Hackwood Art Festival at The Gallery in Shepherd Market.
Well who knew? I certainly didn't. It turns out that a three day art event has been taking place every June since 2005 within a converted 18th Century barn in Hampshire. This year the event is supporting St. Michael's Hospice, a local charity. Sounds like a good day/weekend away from The Smoke
Shepherd Market fascinates me. It's a tight little collection of streets hidden in Mayfair between Piccadilly and Curzon Street packed, these days, with pubs, restaurants and galleries. Whenever I am headed there and I turn off Piccadilly into White Horse Street I often wonder if I have taken the wrong turning being as that road is lined with large, damp-smelling empty buildings (a crying shame considering the location). No wonder the streets that make up the market area became a well-know red light district. I did spot one red light last night. Was it for real, or was someone in an upper room having a giggle?
Thinking about how Shepherd Market no longer has a market as such, I started making a mental list of other long-gone markets. Here are my initial thoughts in picture form: 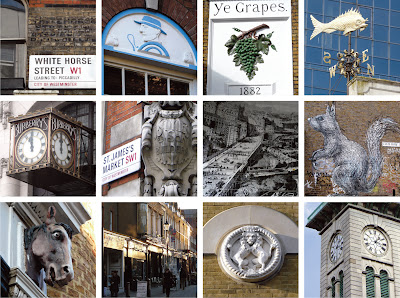