Woolwich past and present

My recent to the Cinema Museum reminded me that last summer I was in Woolwich admiring the wonderful façades of the old cinemas there.

Woolwich town centre is a mix of all sorts of everything. People are not going to the cinema so much these days, so the lovely old picture palaces are being now used for other things. As far as I can ascertain The Grand, converted from the ABC Regal on the site of the old Hippodrome, has been revamped into an arts venue. The Grade II Listed Granada with its gothic interior has was converted into a bingo clu b(it still says GALA BINGO on the tower) but it is now home to a church. The gorgeous Art Deco Coronet/Odeon (built 1937 and also Grade II Listed) with its curved tiled frontage is now known as Gateway House and home to The New Wine Church (do they worship the grape?)
The Empire is now long gone, having been demolished.
More info and some great archive images about these cinemas here. See also The Theatres Trust.
Below are some of the photos I took last summer, which include two of the above- mentioned cinemas mixed in with shots of other interesting architectural features which can be found close by. The northern end of Powis Street contains some lovely buildings including a ornate terracotta fronted theatre and what I think was a department store that resembled cinema architecture (middle and top left). This area is under renovation at the moment; the scaffolding is up and there are signs alluding to new shopping malls. I hope the plans enhance rather than destroy all of this fabulous history. 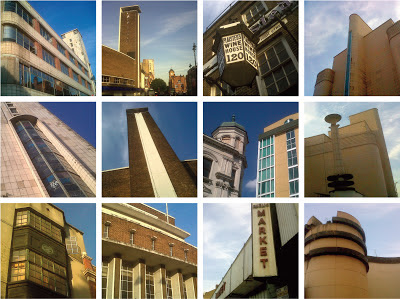