London for less – cheap days out

People are always telling me London is expensive. Well, just like any other city, it isn't if you know where to go and can manage avoid the usual tourist attractions and recommended restaurants.
Laura, a student friend came to stay with me for a few days recently and we managed to pack so much into her short stay here...
Evening one: a filling meal in Wagamama followed by a showcase gig (five bands for the price of one!) at the o2 Academy Islington for £8. Add in a couple of beers =£25 each.
Day two: showing her the around the local delights and shops in the Holloway area with Turkish pancakes for lunch (I first met her in Turkey at a pancake stall!). Then a bus to Camden and the markets, a walk up Chalk Farm Road, yummy ice cream, up to Primrose Hill for the view, then back to Camden Road via the canal enjoying sneaky peeks of the animals in London Zoo. Another bus back and a couple of pints in my local pub. The day came to about £20 each (excluding some very good charity shop purchases). 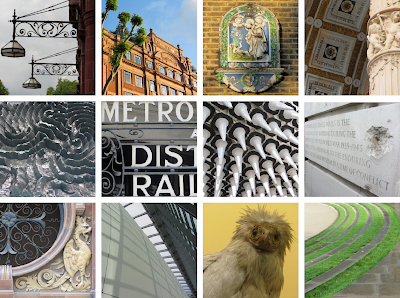 Day three: she wanted to revisit the Natural History Museum, so, because I know she too loves all the architectural details etc in London, we got the tube to Gloucester Road so I could show here the two station entrances and some nearby buildings. From there it's just short walk to the major museums. We got snap happy taking photos of the their exteriors along Exhibition Road and then went into the NHM where we spent hours looking at different kinds of rocks and crystals and strange birds and weird fish, and got 'trapped' in the lovely wildlife garden which had, despite signs to the contrary, no direct exit.
At the main entrance to the V+A we admired the fabulous overhead 'scuplture' made using white traffic cones. This is part of the Heatherwick exhbition which is on my list of things to go and see. Laura tried one of the wobbly Spun chairs which are littered around the museum. It looked fun but I declined (I didn't want to kick off a recent back injury again!).
Laura is interested in the old oxblood tube stations designed by Leslie Green so I'd decided to walk back along the Piccadilly Line and show her some of the closed stations. Whilst admiring Brompton Road station I suggested we went into Brompton Oratory. This gorgeous Catholic church is overlooked by many visitors to London (who follow the usual pattern and go to St Pauls, Westminster Abbey etc) and it's really worth a visit. We were so lucky as, just as we walked in, the Relic Of The Cross service started. So we took a pew and tried to look like we knew what we were doing. The sound of the choir was wonderful. We didn't really understand what was going on up front and I don't think it's possible to be an asthmatic Catholic with all that aromatic smoke being waved about! But what an absolute treat for both of us. A free show!
Then a wander around the little back streets in and around Montpelier and Trevor Squares and into Harrods to show her the magnificently OTT food and perfume halls, ending with that ridiculous Diana and Dodi memorial (no link, sorry!). . . from the sublime to the ridiculous.
Into Hyde Park where we found a tree I'd never spotted before... it's like a big round leafy tent, supported in a few places by struts having collapsed on itself. We admired the flowerbeds, sneered at the Queen Mother Gates and walked through the pedestrian subway into Mayfair. It started raining but you can't get wetter than wet so we walked on and into Shepherd Market, then out onto Piccadilly passing Down Street station and some big, sad, dirty and empty buildings, and then cut into Old Bond Street and Cork St for a bit of window shopping. It was a contrast to cross over Regent Street into Soho, as by now it was gone 8.30pm on a Friday and the streets were full of so many people drinking on the pavements etc. Evidence that Nash's borderline is still working. We found a good cheap 'eat as much you like' Thai+Chinese buffet and after that, having had our fill of food and culture, got a bus back to Holloway. Total spend about £18 each.
The next day I was busy at Spitalfields so Laura purchased a One Day Travelcard for Zones 1&2 and after helping me to set up she left to go sightseeing. She was back at 4pm with photos of Shoreditch, the City, Whitehall, South Bank and more! Blimey she would put the Japanese to shame!
And then she went and caught her train to Leeds.
I have lots of ideas for her next visit...