At 5pm yesterday afternoon I finished my volunteering stint as a London Ambassador – five days from noon until 5pm in Trafalgar Square.

The word 'ambassador' is a strange choice being, as we were, walking information points handing out maps of London. I think the top three questions I was asked were; 'How do I get to Piccadilly Circus?', 'Where is Covent Garden?' and 'Is the Olympic Park open?' (no to the last one... it'll be open during the Paralympics, then closed until March 2013).
I had a good time as a London Ambassador. I am glad I stuck it it out and gritted my teeth through the useless training modules because I met and helped some lovely people in the end. And made a few new friends.
London is lovely at the moment The sun is shining and it's reasonably quiet. The streets are emptier than normal, the tube is pleasant to use, ditto the buses and the public spaces. Londoners seem to have taken heed of Boris's advice to change their working patterns vis-a-vis the Olympics and are either working remotely from home, or have gone away on holiday. It's lovely! The evening streets are not so full of after-work drinkers. Everyone is smiling and happy after such a great sporting event and visitors are getting a really good impression of our fair city. I wish it was like this all year round! 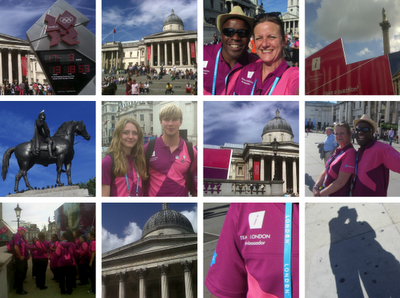 So, how was my ambassadorial week?
Let's start with those bloody uniforms. As suspected, they were horrible to wear. Hats were supposed to be worn but when you are encased in pink and purple plastic sweating in glorious sunshine, putting a lid on the top is not a good idea. When the sun hid behind a cloud I was cold and shivery; the material being non breathable did not allow the air to dry my body. Yeuch!
I noted that the The London Transport staff at our pods, there to help people find their bus stops or plan their tube journeys, were just wearing loose pink branded sleeveless things over their normal clothes. Why oh why the powers that be couldn't have designed something similar for the Ambassadors is beyond me. The waste of money regarding our uniforms and the materials used to make them disgusts me on many levels. Will people really want to buy any of this on ebay as they suggest?
I hated having to wear closed-in shoes. What a really silly stipulation. Surely it's better to be able to wear whatever one finds comfortable? I am sure the public only really noticed the branded tops and jackets and wouldn't have given a flying whatsit if we were sporting green sling-backs or light blue pixie boots.
Branded umbrellas would have been useful – after all, this is England, known for the rain! In pink and purple, they would have been really visible and in the hot sun they would have been great as parasols. In contrast to the clothes, this would have been an item I would have actually wanted to keep and use again. And pens... where were the pens?  I can't recall any event I have ever been to that didn't have branded pens or pencils!
There were way too many Ambassadors. We were like a sea of bright pink dots littering the square. I was disheartened by how many had scant knowledge of London, let alone the immediate vicinity. One of the managers admitted that he didn't know the Trafalgar Square area, and in the previous week he'd been in another location he didn't know very well. This turned out the be Oxford Circus. Oh dear.
On the plus side, some of the younger Ambassadors were knowledgeable, really keen to help and really good fun to hang out with. Others, mainly the older ones, were, how can I put it... jobsworths or competitive serial stewards, trying to be all know-all and do everything by the book. These badge collectors seemed to think Boris ought to be coming round and patting us on the back one by one. Their 'me me me' attitude was rather tedious for the core of us who felt we had volunteered to help people, not to show off or be congratulated.
Keeping in pairs, one of the instructions we were given at the outset, was a daft idea. Perhaps they thought if we stayed in pairs we wouldn't get lost?! But if you pair up with someone you will talk to them and thus become less approachable, so I chose to stand or wander alone. A few of us made solo sorties into St Martin's Lane, Charing Cross Road, Whitehall and The Strand... ooh, so brave! But I noticed that many Ambassadors huddled in groups of four or more in the square just chatting to one another, only stopping if a brave tourist came and broke up the party. I couldn't understand why they had volunteered if they were content to be so non-proactive.
So what's the Legacy for the Ambassadors? The feedback from people I chatted to was that having us there was really useful, and many were surprised that this service wasn't there 365 days a year. I think it would be a good idea to have this kind of personal info available all year round, especially for busy periods such as around Christmas and New Year at some major locations, such as Trafalgar Square, but with just 6-10 people manning it at any time. Surely  would be Boris should ask all the Ambassadors if they could volunteer for just a few days in a year – I am sure the uptake would be huge.
I'd do it.
I'd also design the minimal uniform... just a tabard thing and an umbrella. Job done.