I put a collection of relevant Paralympic pics together a while ago here.
But this post is not about anything London or sporty it's about logo design.
I have already written here about my disdain for that awful London 2012 logo with its lower case L for London and that redundant square in the middle, but enough of that... this is about the Paralympic logo; the Agitos.
For a few years now I have been collecting snaps of what I call lazy logo designs. And the Agitos fits into this mould...
It appears that there is a simple formula to creating a logo and anyone can do it – all you need to do is write the name of the company and then add a shape, reminiscent of the Nike swoosh, over, under or around the name using the negative space created by two overlapping ellipses. Genius! If you can't fathom the overlapping ellipse thing simply re-draw the shape as best you can, just like in the Agitos version.
Look around you; these things are everywhere.
Below is a screengrab of just a few of the ones I have on file.
The Agitos logo, takes this process further and just repeats the elliptical element, without words, to give, I assume, an impression of movement, agitos being the Latin for 'I move'. See how they've managed to squeeze it in beautifully with the other elements to form the Paralympic Games 2012 logo. Nice! Not.
I may have to give up my day job. 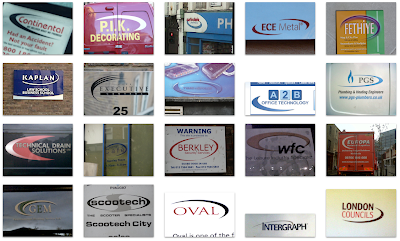