Is it just me? Or is anyone else sick of hearing about The Titanic? I only recently fell in (ha ha) that all this media interest is because it's 100 years since it sank and that's what all the fuss is about.
Plenty of other boats have sunk too you know. Well, none quite as big, and none have had a cringingly bad film made about them (you can't include the The Poseidon Adventure, starring the wonderfully named Red Buttons cos that wasn't real).
Over the years there have been maritime disasters with greater loss of life, so why has the Titanic become so famous?
The 3D version of James Cameron's 'Titanic' is in the cinemas at the moment. Don't bother. Just watch this better, shorter version; Adam & Joe's 'Toytanic' – genius!
There's a Titanic drama series on TV which I have so far managed to avoid, and people are going on ironically ill-fated Titanic memorial cruises. I noticed earlier this week that the Titanic Cafe in Holloway Road was putting up banners promoting some kind of special offer. Prices going down perhaps?! The business going under?! All hands on deck!!!
I have always more interested in IKB's final amazing engineering feat that was the SS Great Eastern which was launched just over 150 years ago, yet I don't recall much fuss about that except a couple of programmes on BBCs 2&4 a few years ago.

Update
A friend sent me this from today's
The Guardian:

Below are some photos of boats/ships in London: 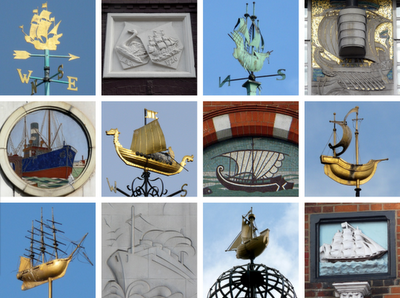 Find them all here.

Email ThisBlogThis!Share to TwitterShare to FacebookShare to Pinterest
Labels: boats