A Co-operative ghostsign in Walthamstow

I little while ago, I heard that a Co-operative ghostsign in Walthamstow had been overpainted. I'd assumed it was this one below, on the side of Tommy's Tuck-in Cafe at 422 Forest Road opposite Lloyd Park and the William Morris museum. 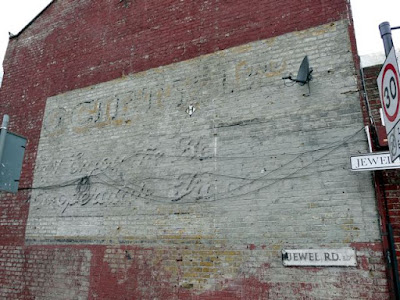 But no, passing it on a bus earlier this week, I see it's still there, albeit slighty obscrured by modern signage panels at low level. My pic above, taken on a dull day in October 2008, shows that some of the wording has, over time, been overpainted. A brighter day can be found on retrospective Google streetview here.

The parts that have been covered/saved by a later C20th advertisement appear to read:

Unfortunately I can't get any further with this because I don't have any reference to hand for Walthamstow. At the time this was created, Forest Road would not have been part of Greater London, so do let me know if you can shed more light on this one because the lack of local listings and directories is hindering my sleuthing abilities.

Note the name of the street, Jewel Road – I love that the roads either side of it are Pearl Road and Ruby Road. I have no idea why this should be. Again, any further info welcome.

Oh, sorry, I almost forgot – the 'lost' Co-operative sign mentioned in my opening sentence was at another site further east, visible from St James Street station, here and there are lots of ghostsigns in that area of Walthamstow, almost on every corner.

Both of these Co-op shops would have been rather small compared to the Co-op's marvellous building on Hoe Street which features some fab examples of the society's often-used beehive motif, a symbol of working together. This big store also sports some commemorative panels that show that it was constructed as the Stratford Co-operative Society. Notice also that there is still a Co-op funeral services shop trading from there.

At the Hoe Street end of Ruby Road there is a recently uncovered ghostsign for Warner's the super grocers', an independent local trader who can't have been pleased about the co-op's domination in the area. And another Walthamstow ghostsign that intrigues me can be found just east of Jewel Rd, at the northern end of Wood Street, on the corner of Woodlands Rd – there's a long wall where one of the signs had been covered and protected. It was revealed c2016. I went to check on it a few days ago: 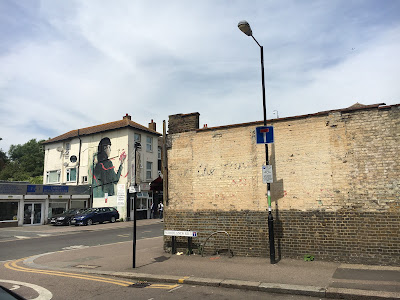 This one is proving hard to decipher. There are tantalising hints of red and black script under that cream paint but thus far I can only name out the word 'The' which is isn't getting me very far. Who knows, perhaps it's another Co-op sign?

Let's keep an eye on these walls because our modern water-based polymer paints will not stand the test of time – the layers of weathershield will gradually peel away to reval the ghosts of the past... ooh, the suspense!